Game of Thrones season 8, episode 4 analysis: The Last of the Starks

This short, final season of Game of Thrones is quickly approaching its finale, and there are a lot of loose ends to tie up in a fairly short amount of time. Now that the Long Night has come and gone, our attention turns back to the conflict of men, with the question of who will rule Westeros still up in the air. It’s Daenerys vs. Cersei with the North acting a little bit tired of this whole thing, so who knows how this will all play out?

As always, now is where I tell you to leave if you haven’t seen last night’s episode of Game of Thrones, The Last of the Starks. The episode will be spoiled in its entirety, so continue reading at your own peril.

Unsurprisingly, this week’s episode opened with Winterfell laying their many dead to rest. Dany says one final goodbye to Jorah and Jon gives a nice speech to the survivors about how those who gave their lives did so in the defense of man. After that, the dead are burned on massive funeral pyres and the survivors of the battle with the White Walkers have a solemn feast inside. 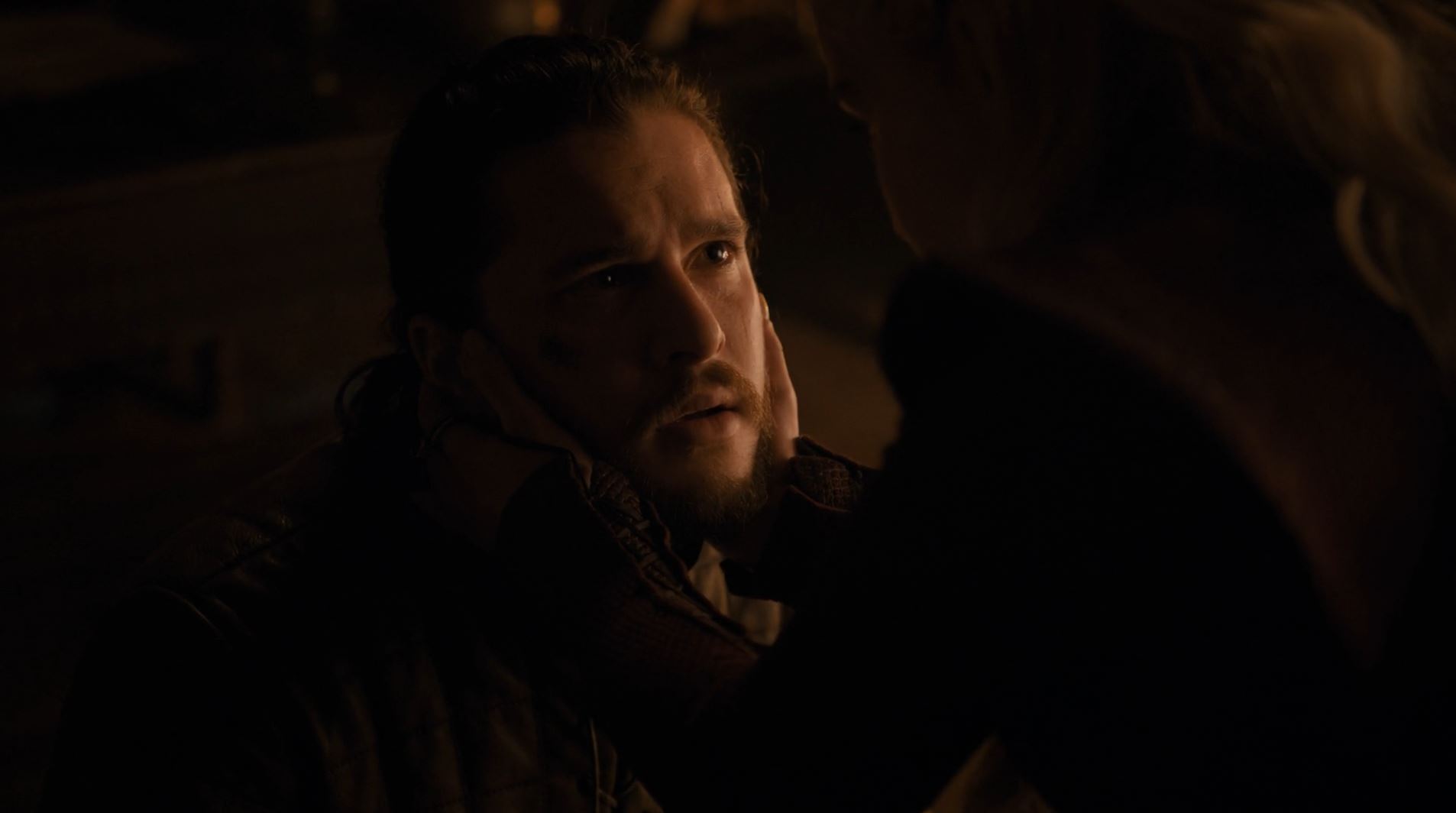 During that feast, Daenerys names Gendry the lord of Storm’s End, the ancestral seat of House Baratheon. That seems to lift everyone’s spirits a bit, and Winterfell’s halls come to life with drinking and chatting. Jaime, Brienne, Podrick, and Tyrion play a drinking game in which everyone uncomfortably learns that Brienne is a virgin (which means that’s bound to change soon), prompting her to excuse herself from the table with Jaime following not far behind.

Meanwhile, Sansa and The Hound have a quick reunion and Gendry tracks down Arya to ask her to be his wife. She declines because “she’s never been a lady,” leaving Gendry feeling a little dumbfounded.

After the feast, Jon and Daenerys meet privately to discuss the revelation that he’s actually a Targaryen and not, in fact, Ned Stark’s bastard. Jon says that he doesn’t want the Iron Throne even though he has the stronger claim to it, and Dany tries to convince him to keep his true parentage a secret from everyone. When he says that he plans to tell Sansa and Arya the truth, Dany grows cold and leaves him. 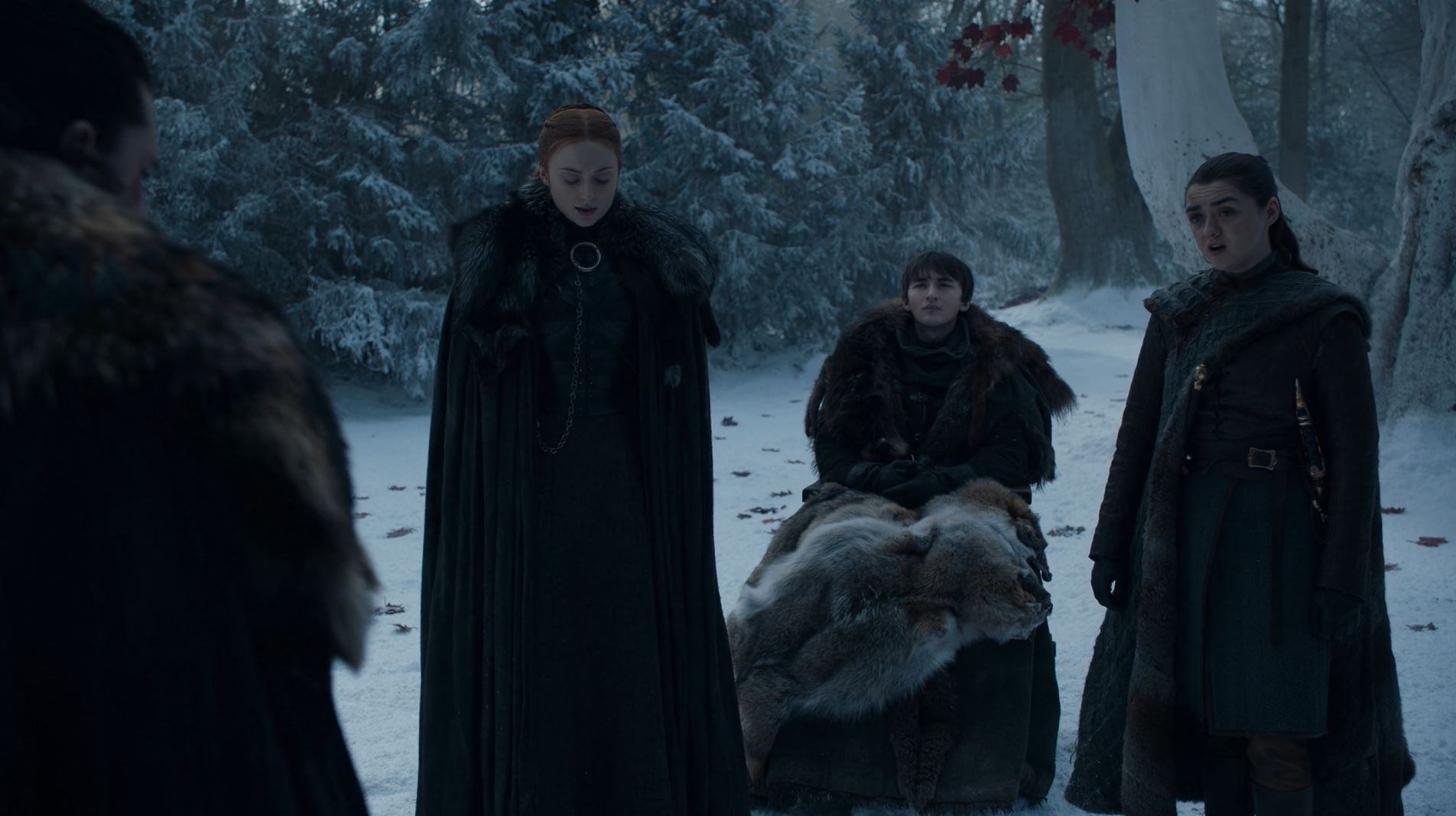 At the same time all of this is happening, Jaime shows up at the door to Brienne’s room and – what do you know? – the two end up doing the deed. People have been expecting this to happen since the two went on that long journey to King’s Landing together early on in the show, so it wasn’t that much of a surprise, but still, pour one out for the people who were hoping for Brienne to hook up with Tormund.

Then it’s time to come up with the plan of attack. Dany wants to move on King’s Landing right away but Sansa thinks that the soldiers should have more time to rest and recover after the battle with the dead. Jon ultimately sides with Dany and the group comes up with a plan that will see one portion of the army march to King’s Landing down the Kingsroad while Dany and the remaining soldiers are ferried to to Dragonstone with what Yara Greyjoy has managed to reclaim of the Iron Fleet. 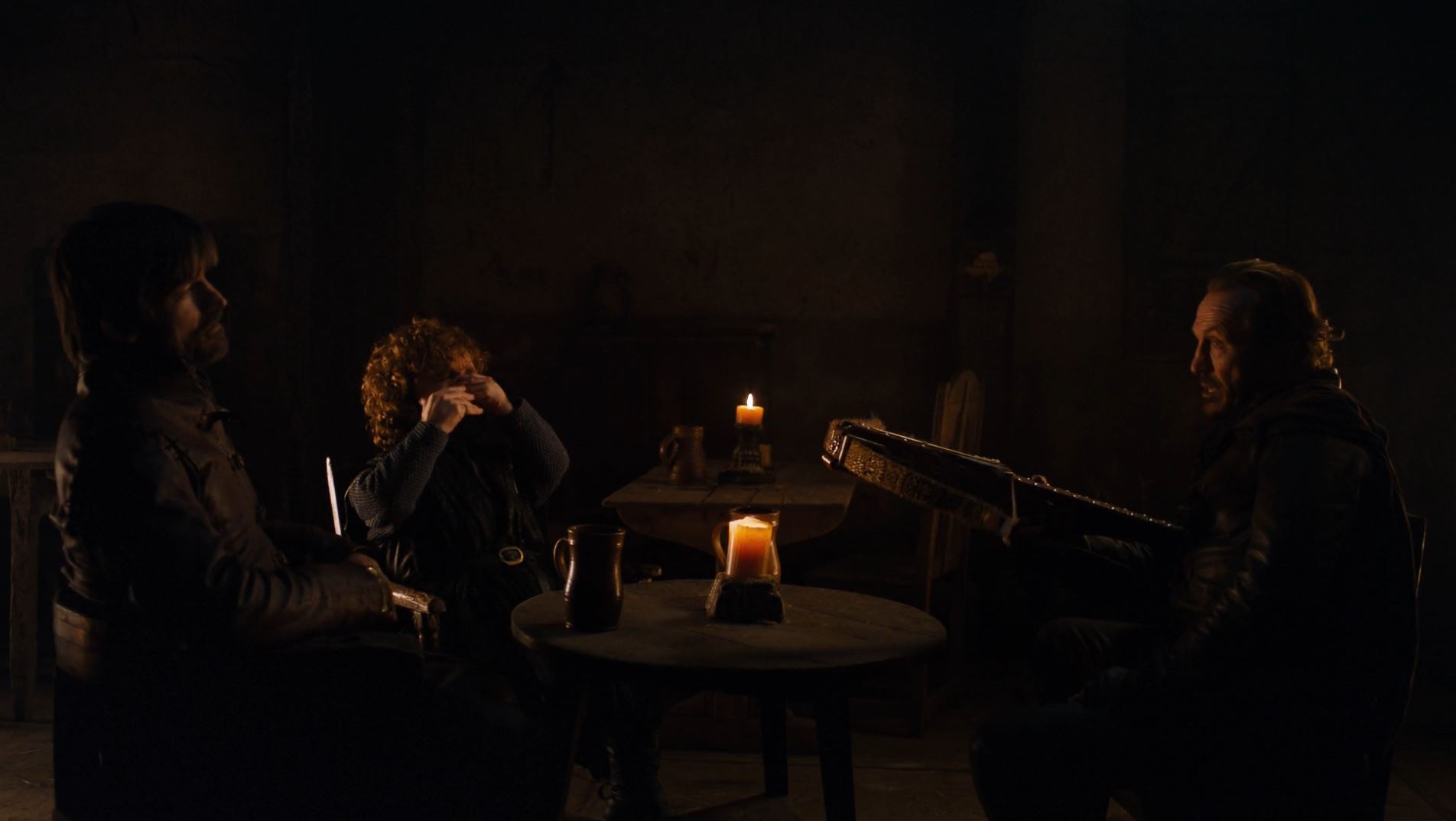 As the army prepares to move out, Jon meets with Sansa, Arya, and Bran in the Godswood. Sansa and Arya ultimately learn of Jon’s true parentage and are sworn to secrecy, so of course more people are going to find out. Bronn reappears in the middle of the night, pointing a crossbow at Jaime and Tyrion. He tells them that Cersei offered to make him the Lord of Riverrun if he killed her brothers, to which Tyrion counteroffers Highgarden if Bronn lets them live and Dany wins the oncoming war. Bronn agrees, and the two Lannister men avoid a face-to-face encounter with a crossbow.

The next day, Jon says his goodbyes to Tormund, who is taking the Free Folk back to the far north. He asks Tormund to take Ghost with him, saying that the south is no place for a Direwolf. Jon then says a tearful goodbye to Sam and Gilly and heads south with Davos. 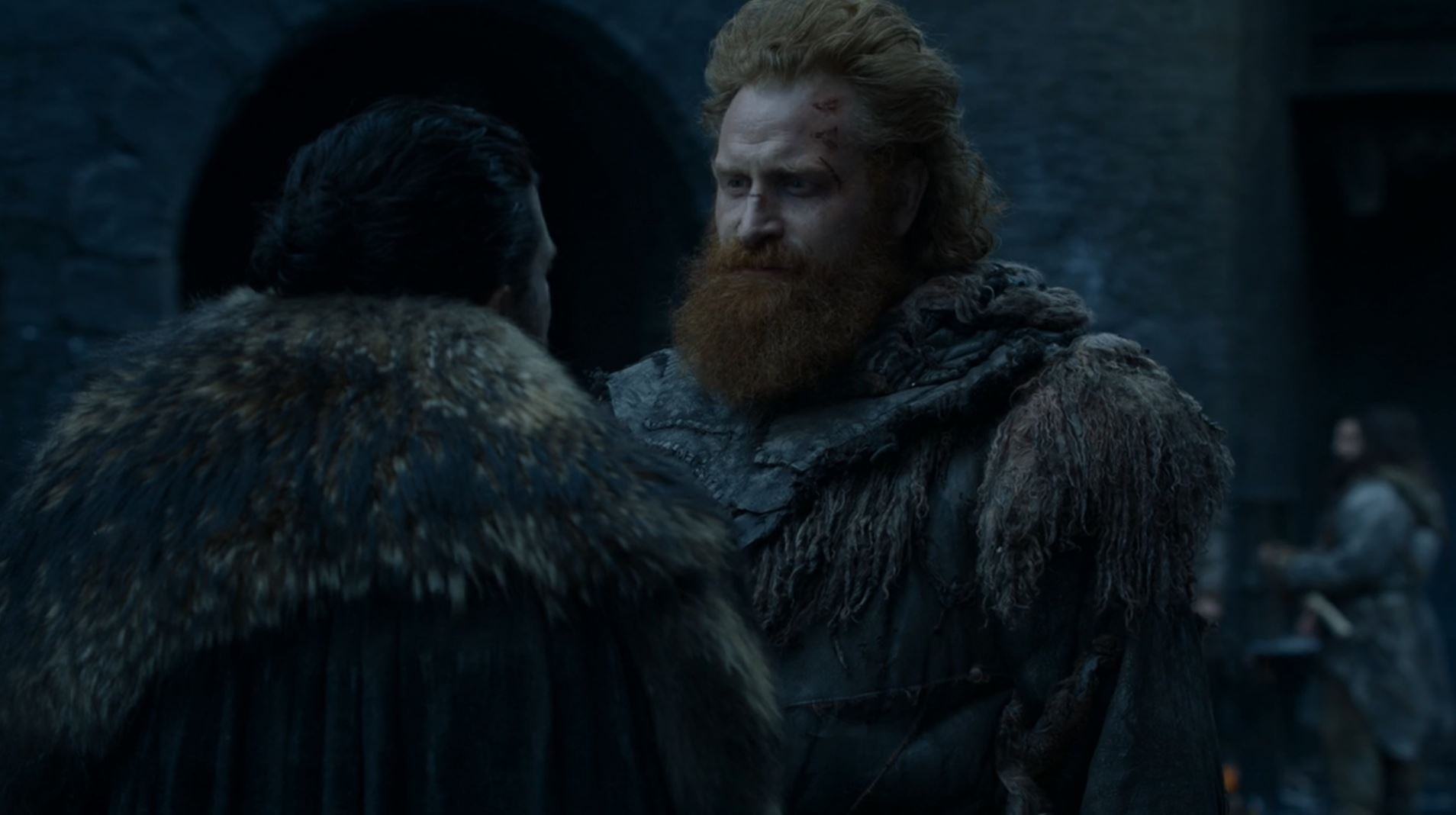 As Sansa watches the armies of the North leave Winterfell, Tyrion meets her on the walls of the castle to make one final attempt to get her to trust Dany. Sansa, unsurprisingly, tells Tyrion who Jon really is, presenting him as a better alternative to sit atop the Iron Throne. On the trip to Dragonstone, Tyrion tells Varys, and the two discuss the conflict between Jon and Dany that’s sure to arise once this secret inevitably spreads further.

The trip to Dragonstone is unfortunately cut short by an ambush from Euron Greyjoy and the Iron Fleet. Euron shoots a recovering Rhaegal out of the sky, leaving Daenerys with just one dragon, and destroys some of the ships in Dany’s fleet. Missandei is taken captive, and though Dany and Grey Worm both want to move on King’s Landing immediately in response to this attack, Tyrion and Varys talk them out of it, noting that Cersei has moved thousands of innocent people into the Red Keep and that they’ll surely die if Daenerys attempts to siege the castle by using Drogon. 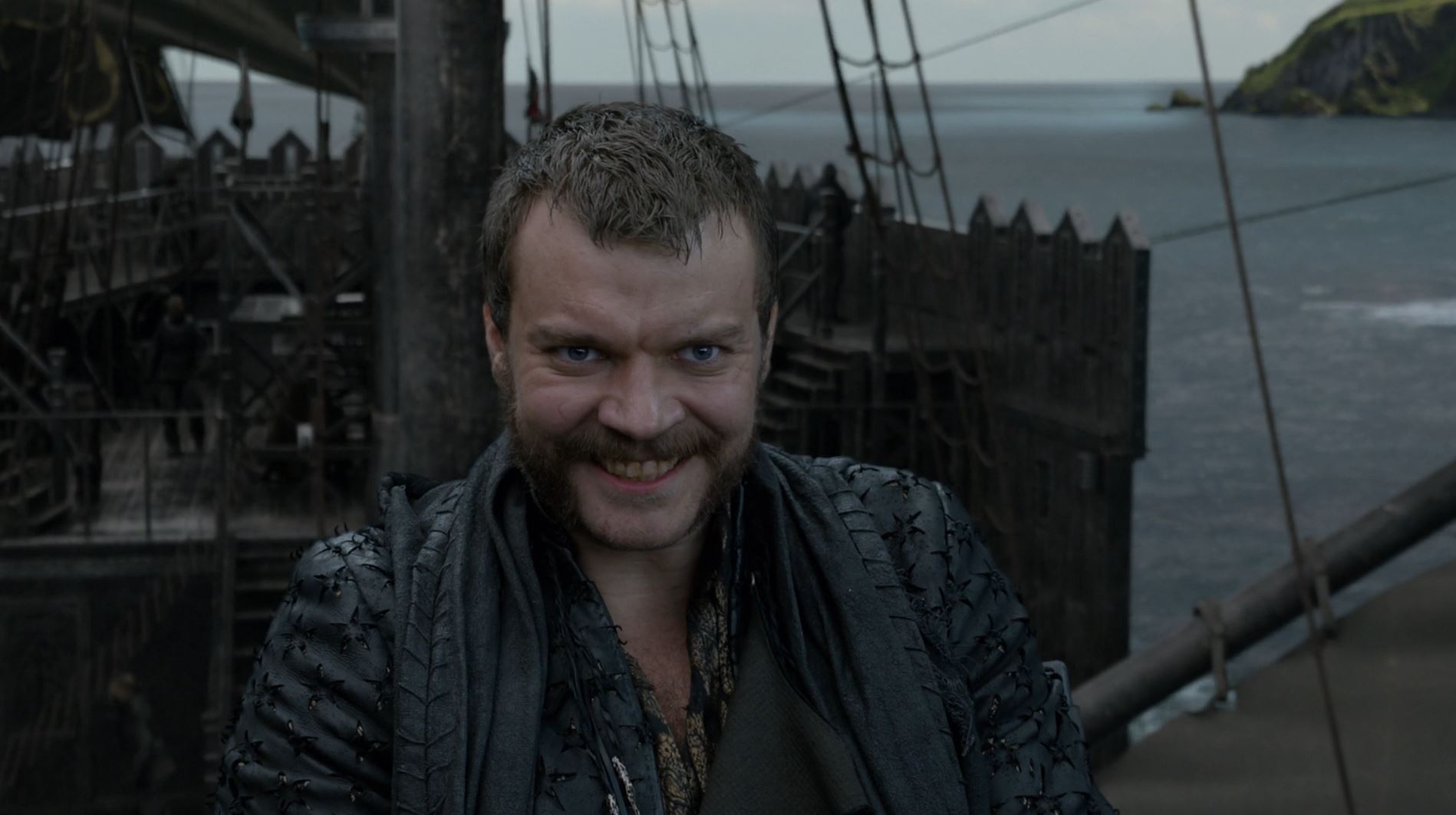 Instead, Daenerys agrees to a parley with Cersei in which they both demand the immediate surrender of the other. Cersei’s demands come with the caveat that Missandei will be killed if Dany doesn’t accept, and though Tyrion tries to talk Cersei into stepping down as Queen to avoid bloodshed, neither side can agree to terms and off comes Missandei’s head. If Dany wasn’t fuming before, she certainly is now, and the stage is set for all out war in which a lot of people will presumably die.

The Last of the Starks analysis

Like episodes 1 and 2, in The Last of the Starks most of the narrative is centered around battle preparations. Dany wants to march on King’s Landing right away, and though Sansa rightly points out that the soldiers need time to rest and heal, Dany doesn’t really seem interested in entertaining the thought. She helped the North repel the dead, now she wants what she traveled to Westeros for: The Iron Throne. 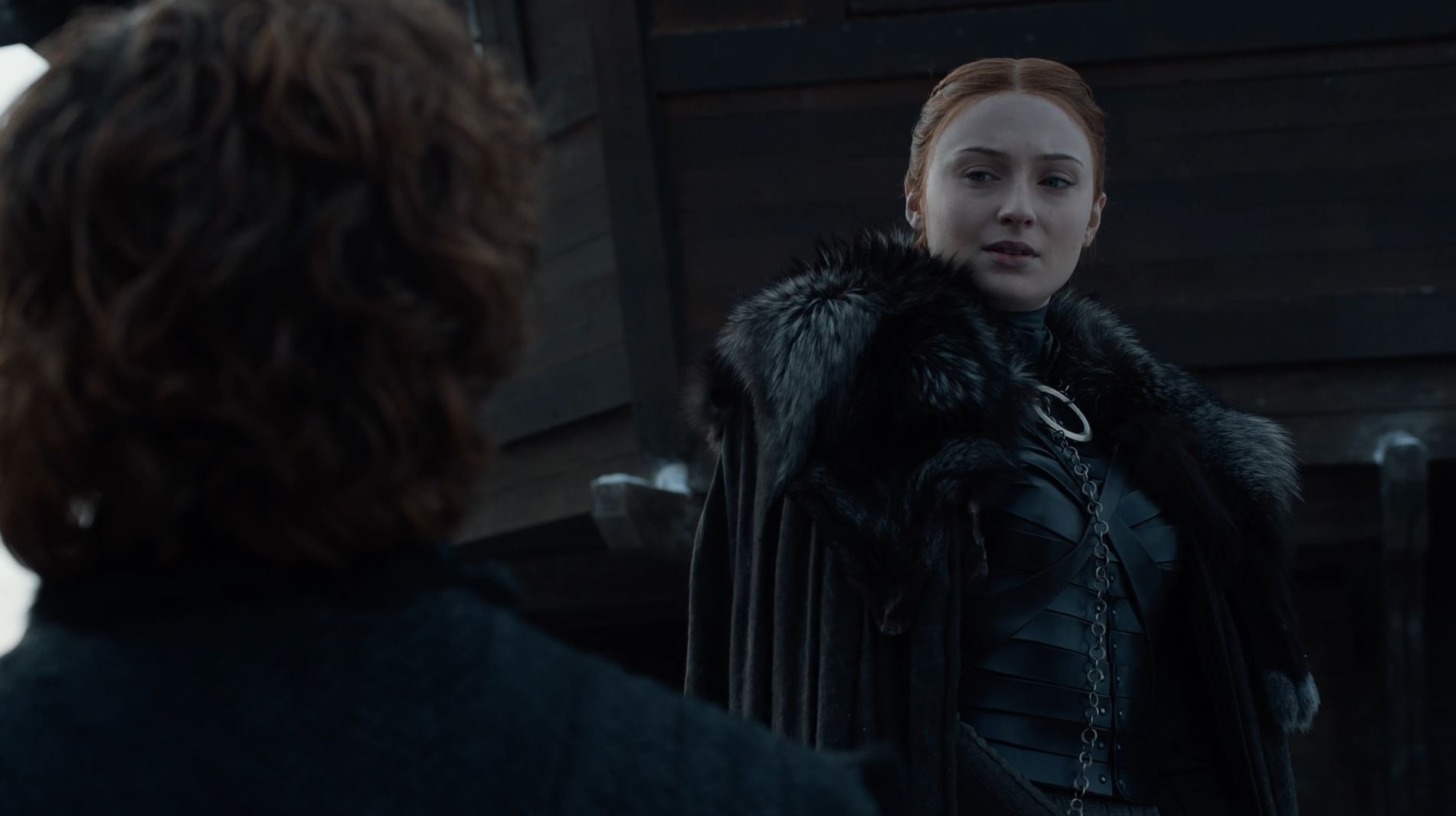 We’re seeing more of that Targaryen tyranny come to the surface again, and throughout this episode, Dany’s “my way or the highway” attitude definitely seems to be rubbing some people the wrong way. Her advisers are losing faith in her – though Tyrion attempts to either get people on her side or convince them to stay on her side throughout the episode, there are moments where even he seems to doubt what he’s saying.

For instance, in his final conversation with Sansa in Winterfell, she points out that he’s actually afraid of Daenerys. Perhaps this is a realization to him as well, or maybe Sansa is just bringing deeply held emotions to the surface, but regardless, the look on Tyrion’s face when she says that tells us that he is indeed afraid of her and that’s at least a little alarming to him. 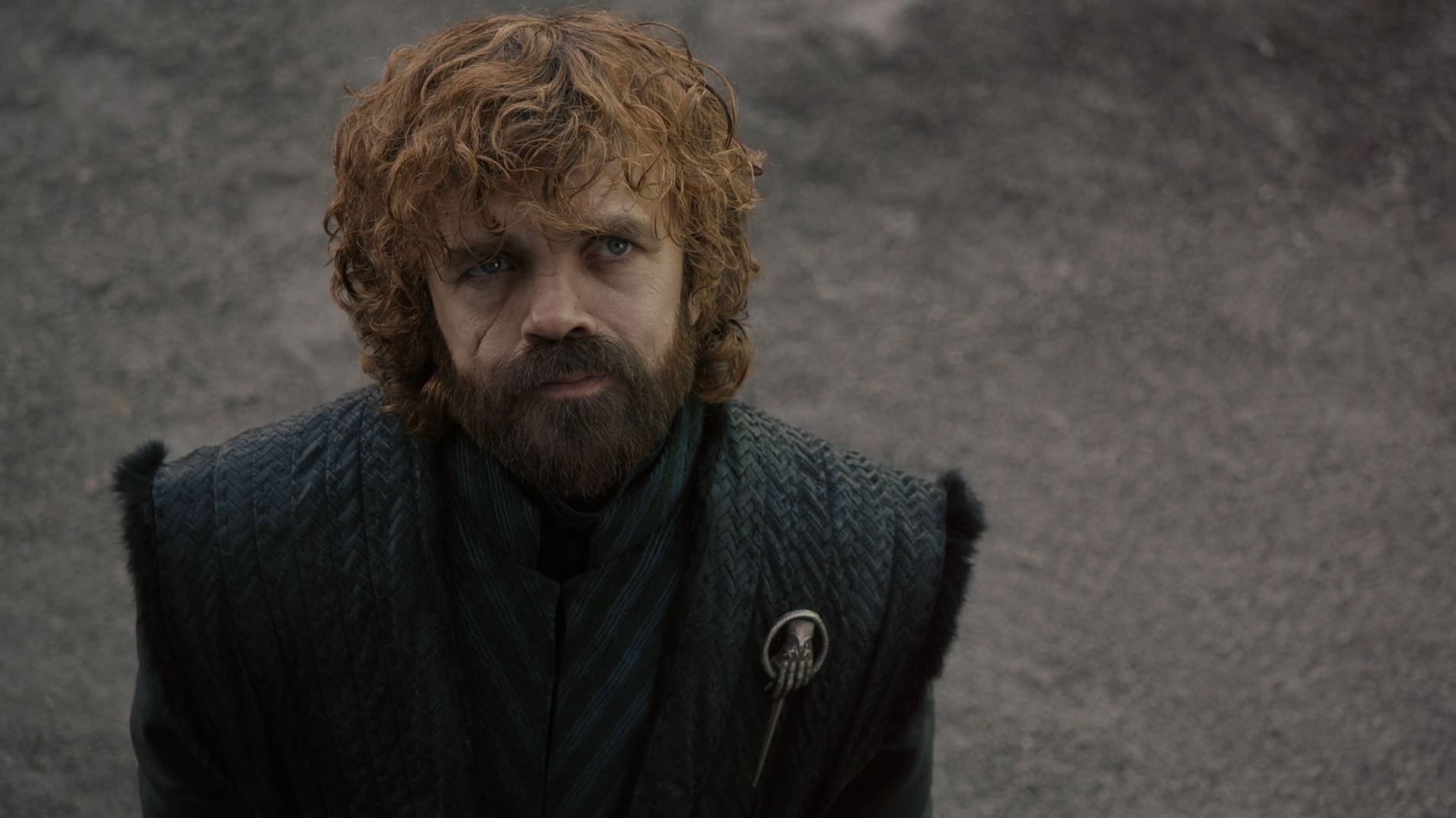 After this episode, it’s clear that when Dany feels she’s losing control of a situation, she becomes cold and almost authoritarian. When she has that conversation with Jon about keeping his true parentage a secret, she makes that turn in the blink of an eye. The only acceptable solution is the one she puts forward, which isn’t a very desirable trait in one who wants to rule.

Unfortunately for Dany, others are starting to take notice. Sansa and Arya have never trusted Daenerys, but now it seems that Varys is beginning to turn on her as well. Once Varys finds out that Jon is actually the son of Rhaegar Targaryen and thus has the better claim to the Iron Throne, he seems to immediately align in Jon’s camp. Jon doesn’t even want the throne, so as long as the secret stays hidden it shouldn’t be a problem, but Varys knows that when the secret gets out, the people will rally behind Jon and will likely make him king anyway. 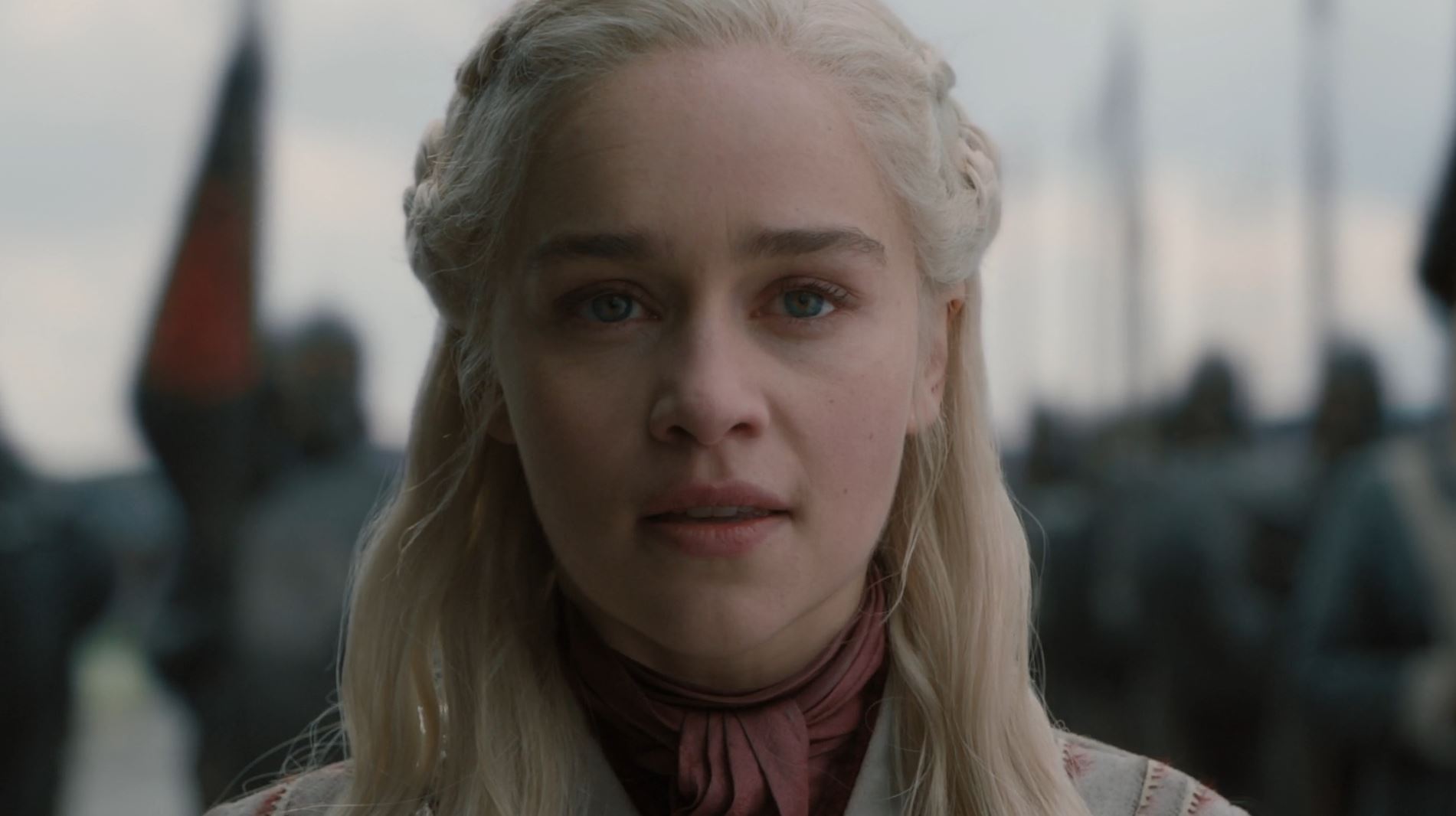 Varys, in other words, sees this situation getting away from Dany quickly – regardless of what Jon says, and when that happens – he worries about what her reaction will be. Cracks are beginning to form in Dany’s council, and that isn’t going to be a good thing in the coming conflict. The fact that she even considers destroying King’s Landing in response to Cersei’s surprise attack means that she’s treading a line many of the rulers before her haven’t been able to stay on the right side of.

Not only that, but Cersei has now evened the playing field a bit, though I don’t know that she exactly has the upper hand. With Rhaegal now dead, Daenerys only has one dragon left. Some of the Dothraki and Unsullied survived the Long Night, but not enough to keep the odds overwhelmingly in Dany’s favor. Her victory is no longer the sure thing it once was, and that may make her spiral further into despotism. 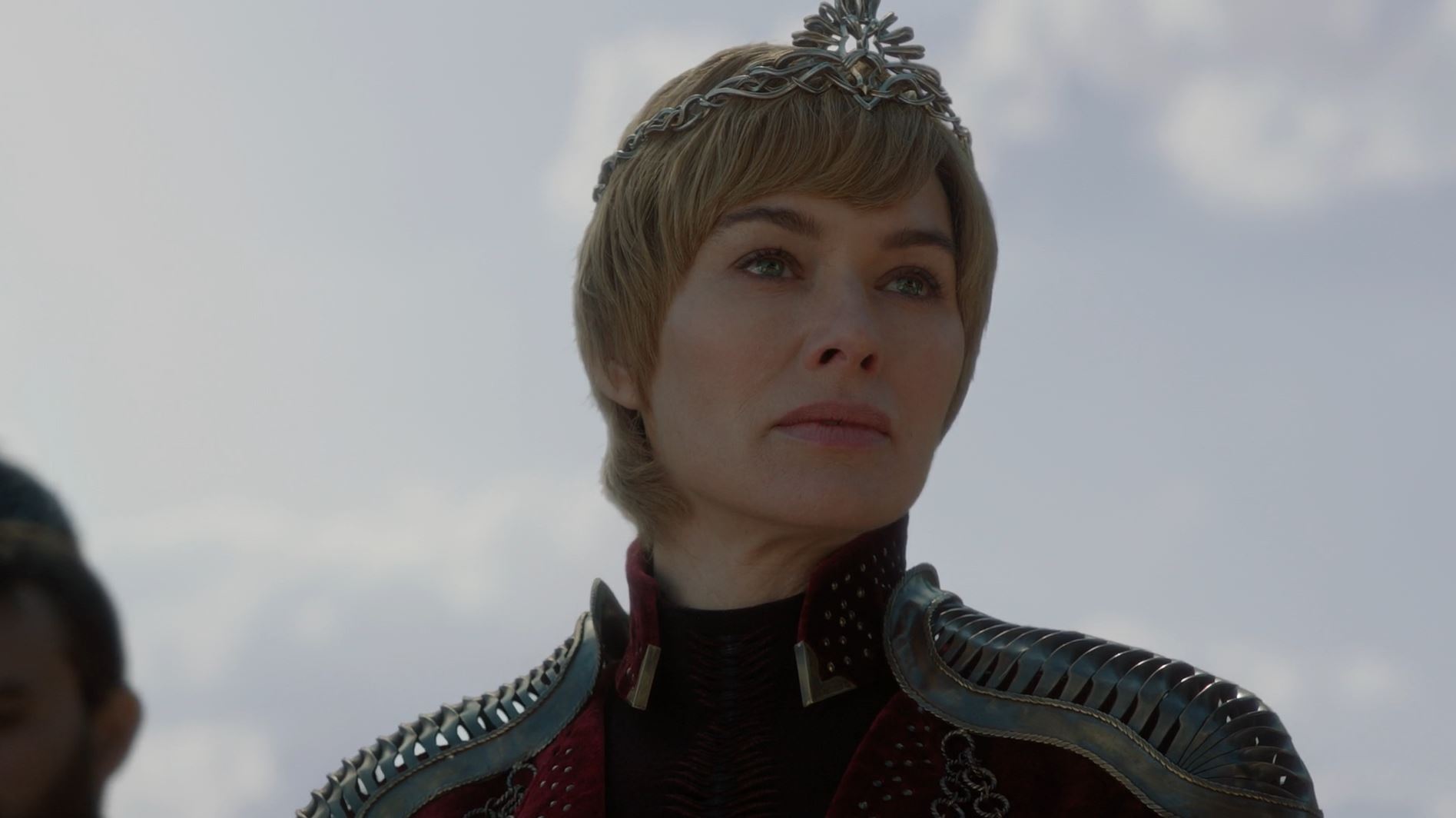 There is, however, a wild card in the coming conflict: Jaime. At the end of The Last of the Starks, he left Winterfell to head south for King’s Landing, much to the dismay of Brienne. Jaime believes that he’s just as horrible as Cersei is, and though his intentions in departing for King’s Landing aren’t totally clear, it’s likely that he’s going there to try to talk her into surrendering and sparing King’s Landing from the wrath of Daenerys. Fans have long been predicting that Jaime will be the one to kill Cersei, and the wheels are now in motion for that theory to play out.

So, at the end of the 4th episode of season 8, we’re a little bit closer to this final confrontation, but we’re not quite there yet. Cersei seems willing to sacrifice many of the people living in King’s Landing to keep her crown, and Dany is dangerously close to burning them all anyway. Then we have the problem that Jon’s true identity tosses into the mix, and we’re left with a big mess where heroes could very well become the villains as they vie for power.

No one really knows how this is going to end, but if Dany continues down this path, she’ll need to die along with Cersei. It looks like things are finally coming to a head in the next episode, and who will come out on top is really anyone’s guess.