Very few will probably deny that the new Samsung Galaxy flagships are beautiful, but that beauty came with hidden costs. As exposed last week, the Galaxy S6 edge was a tough nut to crack, figuratively of course, when it came to repairing the smartphone with the fancy dual curved edge screen. Now it’s the main flagship’s turn. The Galaxy S6 is practically similar to the Galaxy S6 edge, but with less gimmicks inside. Will that slight difference be enough to give it a higher repairability score? Apparently yes, but only so slightly.

Samsung’s decision to go with high quality materials, like aluminum frames and Gorilla Glass backs, seems to have resulted in a very tightly closed device. This meant that the very first step of removing the back cover was already a huge chore. And here, the Galaxy S6 doesn’t stray much from its sibling and requires a good amount of coaxing with heat and a suction cup to convince it to yield.

Once the cover has been removed, the lone difference between the two smartphones is revealed. Due to slight differences in components, there was enough room for the battery cable on top of the motherboard. On the Galaxy S6 edge, this cable was partly hidden underneath the motherboard, requiring that to be removed first before you can actually remove the battery. Fortuntely, on the Galaxy S6, there is no need for that. 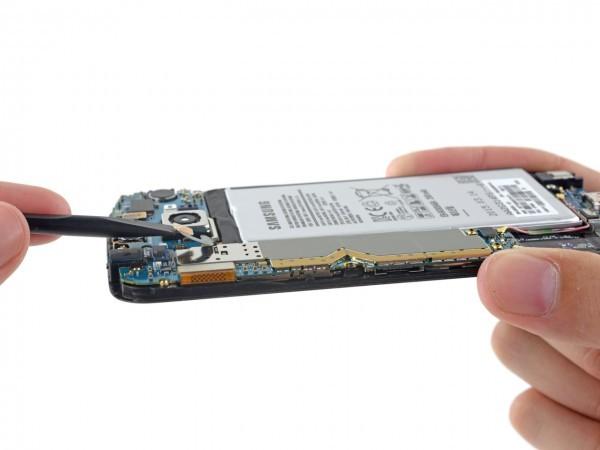 Unfortunately, that’s just about the only positive difference between the two. The rest of the smartphone betrays the same solid, glued build of the edge version, which meant having a harder time taking things apart, which means a possibly more difficult repair process. The glass on the front and back makes accidentally cracking them during the repair process even more probable. Replacing the front glass might also damage the display.

The Galaxy S6 edge scored a very dismal 3 out of 10 on iFixit’s repairability index. And how did the Galaxy S6 fare? It got a 4 out of 10, which is disappointingly still low but only better by virtue of an easier to pull out battery. Considering these factors, Samsung’s two new smartphones will be a pain to repair and will probably require even more care than usual. 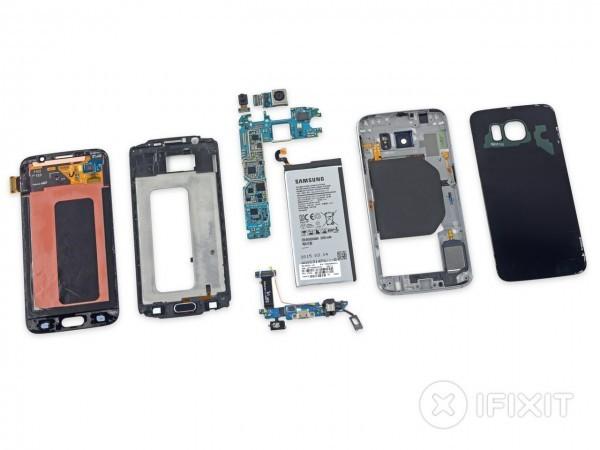