The team behind CyanogenMod have just opened the doors for Samsung Galaxy S III users to test our their newest software build in “nightly” mode this week. The software known as CyanogenMod 9 is by far the most popular 3rd party “unofficial” build of Android on the web, and now that it’s hit the Samsung Galaxy S III in what’s essentially the equivalent of a Beta mode, it’s about to get a whole lot more popular once again. This software will bring you much closer to a vanilla version of Android 4.0 Ice Cream Sandwich than Samsung‘s own TouchWiz UI allows, this being one of the main draws for all CyanogenMod-laden devices on the market today.

This software is currently being released in “nightlies” – this being downloads that have been worked on each night (and each day, incidentally) and released for download by intrepid early-build users and software testers across the web. This process allows the makers of CyanogenMod to get beta test reports quickly, easily, and en masse while software developers out in the “real” world must either do said testing themselves or pay for such a convenient situation. Of course there’s always the chance that a tester from the public will spill the beans, but with CyanogenMod there’s no worry: it’s already free to download and sharing is the name of the game! 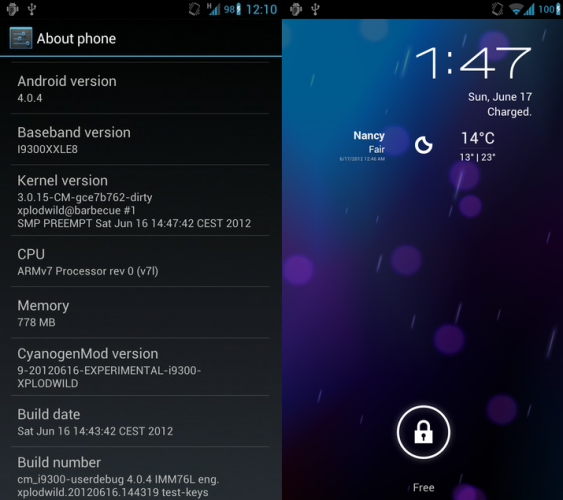 So head on over to XDA-Developers and make sure you’re not squeamish: this is indeed a piece of a hacking puzzle, so plenty could potentially go wrong. This software is not guaranteed in any way not to wreck your hardware, but if you do take the risk, your rewards with a lovely bit of user interface made by magicians will be well worth it. Have a peek at our full review of the Samsung Galaxy S III in its international edition, then stick around as we eventually get our hands on the USA-carried Galaxy S III models as well!