It seems that Samsung has been busy with more than just figuring out how to get the S Pen unstuck when pushed in the opposite way. A USPTO filing, made in the third quarter last year, reveals one idea to turn that stylus into more than just an input stick. Because, after all, you won’t be using it to watch a movie. Instead, the S Pen can be folded and inserted in a such way that it doubles as a stand for propping up the Galaxy Note for some much needed video binging.

On paper, the idea has some merit even though strange at first. If you insert the S Pen into its silo half way through and fold it at a specific angle, the exposed half of the S Pen acts as a stand in two possible configurations. The one show above shows the phone supported by the end of the S Pen, the “cap” at the opposite end of the writing tip itself. The other setup has stylus on the lower edge of the smartphone resting almost flat on the surface. 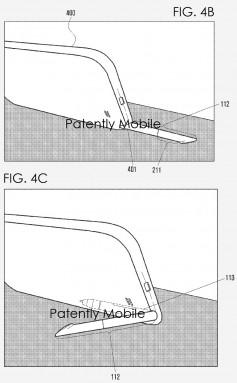 On paper, it sounds nice, but implementation could be tricky. The patent indicates a locking mechanism to keep the stylus in place, perhaps to prevent it from straightening up and slipping in or out accidentally. But given the small holes or slots involved, it might be something a tad difficult to match up precisely.

And then we have Samsung’s recent S Pen fail on the Galaxy Note 5. That incident might have caused a few to wonder about the design genius that the Korean OEM employs. A folding stylus and stand is bound to be a more complex mechanism than a simple, retractable S Pen. There might be a few doubts if Samsung can implement it cleanly and without hitches like the last time.

Then again, this is simply a patent, and a relatively new one at that. It’s more an IP protection strategy than a show of intent. If Samsung does push through, however, it could give the Galaxy Note line another edge. Then again, if Samsung indeed plans on making an “S Pen Case” like in another patent, that advantage might be available on most if not all of Sammy’s handsets.