Galaxy Note 8 gets a built-in VPN in latest update

Samsung hasn’t exactly been the most religious OEM when it comes to rolling out updates, but when it does, sometimes include some unexpected treats. Take, for example, the Galaxy Note 8, which has just gotten an update that adds a new feature to the phablet, new to the Galaxy Note 8, at least. That feature is the Galaxy J’s “Secure Wi-Fi”, which is just a fancy pants name for Samsung’s VPN service that promises secure and private browsing, even and especially on unencrypted Wi-Fi networks.

The recent KRACK vulnerability has many questioning even the security of encrypted networks, especially those using the WPA2 protocol. How much more those using less sophisticated encryption and security systems? One of the most common ways to make sure of that is to use Virtual Private Networks, more popularly known as VPNs.

Although now more associated with less innocent uses, VPNs have always been about security and privacy. It has been used from the beginning to allow employees to access office networks even when outside the premises. Recently, it has also become a favorite in fighting rampant spying and hacking.

VPNs have also been traditionally complicated to set up, which is why there has recently been a rise in easy to use VPN solutions. Samsung’s Secure Wi-Fi, powered by McAfee, is one of those. You simply turn it on when you want your Internet comings and goings encrypted and masked. Or you can even set it to automatically turn on for selected apps. 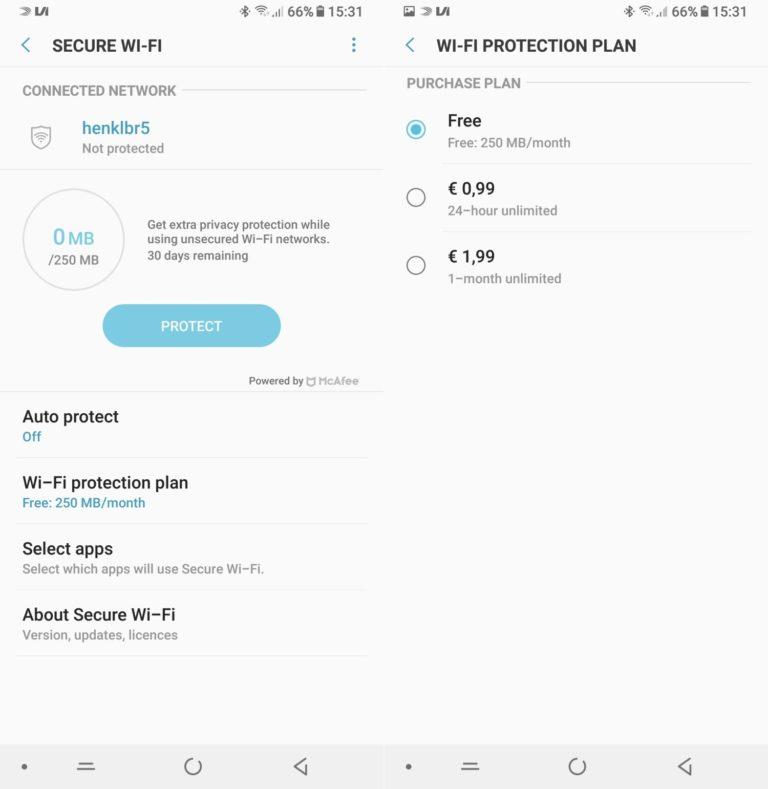 It doesn’t come without a price though, and a literal one at that. VPN services cost money, and Samsung’s free offer only covers 250 MB per month. Unlimited 24-hour coverage costs 0.99 EUR ($1.20), while a month-long protection goes for 1.99 EUR ($2.40). It also isn’t available in all countries, even if your Galaxy Note 8 gets updated to include it.