NVIDIA is proud once again to team up with the folks at Fuhu to reveal a tablet device that’s not just for adults – here with the nabi XD for the “tween” audience. This device packs the same NVIDIA Tegra 3 quad-core processor that some of the most powerful tablets on the planet work with, here bringing a $249 pricetag, this making it the least expensive 10.1-inch tablet with a Tegra 3 on the planet.

This device’s processor also appears in the ASUS Nexus 7, the Google 7-inch tablet you’ll find on the Google Play store now – here with the nabi XD you’ll be getting Android too, but not as you’ve ever seen it before. This device has a user interface that “dynamically updates the gadgets, widgets, and apps that appear based on time and location.” Rather futuristic-sounding stuff!

The Fuhu-made nabi XD works with 10 hours of battery life for a full day of fun and is able to run what Fuhu notes is a “suite of productivity apps and console quality games.” This machine can be paired with a patent-pending optional pad-folio with integrated silicone keyboard cover for a “traditional typing feel” as well. You’ll be reminded of another rather popular device on the market today when you see it – but rest assured, this solution is Fuhu’s own. 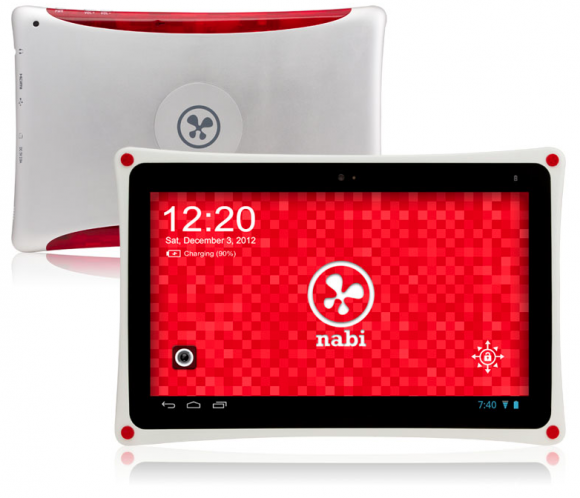 The tablet also works with NFC, able to work perfectly with the nabi exclusive battle-ready figurines the team is revealing that’ll in turn work with the upcoming Battle KINABIs game – we’ll find out more about that soon!