Fortnite’s next item is the Chiller Grenade

We find ourselves at the beginning of a new week, which means that the next Fortnite patch should be coming up quickly. The content of these weekly patches is mostly kept a secret until they’re live, but sometimes Epic likes letting a teaser or two loose in the lead up to them. Epic has done precisely that this week, as it’s currently teasing a new Fortnite item called the Chiller Grenade.

The teaser appears in Fortnite‘s in-game news section, which pops up when you first start the game. As always, the teaser doesn’t really tell us much, simply saying that you can use the Chiller Grenade to “give your enemies cold feet with this winter blast!” 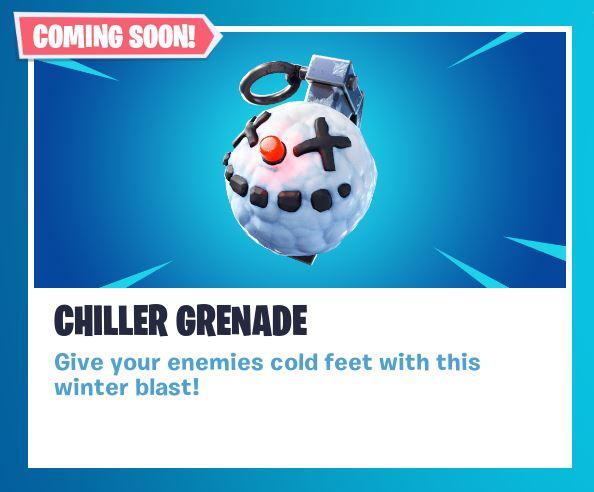 What that means is up in the air at the moment, but we can make an educated guess. It’s possible that the Chiller Grenade will function like Chiller Pads, which freeze the feet of anyone who walks over it. That means you’d be able to throw it at an opponent, freeze their feet, and force them to slide around the battlefield, making it difficult to properly aim a shot.

That seems like the most likely function of the Chiller Grenade, but of course, Epic could always surprise us by giving the Chiller Grenade previously unseen capabilities. Maybe it’ll root enemies in place? Freeze them altogether so that they can’t defend themselves? That last possibility seems a little overpowered, but you never know.

We’ll just have to wait and see what Epic says about the Chiller Grenade when it delivers this week’s update. We should see that update land in a couple of days, with Epic publishing patch notes for it when it’s live. We’ll update you when those patch notes are available, but in the meantime, head down to the comments section and let us know what you think the Chiller Grenade will be capable of.