Ford has just debuted its new prototype headlight technology that can detect and warn drivers of people, animals, or other hazards on the sides of roads at night. The system uses infra-red cameras to identify things such as people walking their pets or cycling, and then adjust the direction of the lights so they are easier to see. In addition, the lights will widen their beams automatically when the system detects intersections or other hazardous turns, improving drivers’ visibility.

The system for detecting pedestrians and other things is called Spot Lighting, and Ford says it’s still in development, so don’t expect it on the next Fusion or Explorer just yet. When something is detected up ahead, the system highlights the people/animals on the navigation display, framing them in yellow or red, depending on how much of a danger they might be. Then, special LED lamps next to the car’s fog lights will swing to the right or left, making the hazards easier to see.

Meanwhile, the Camera-Based Advanced Front Lighting System is based on Ford’s development of the Adaptive Front Lighting System and Traffic Sign Recognition technologies. This uses a forward-facing camera that’s attached to the rearview mirror, and detects things like lane markings, traffic signs, and road curvature to better illuminate the road. 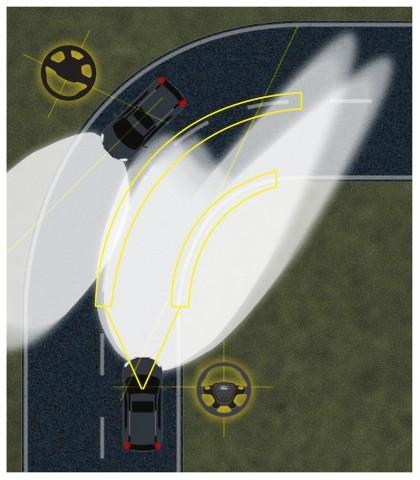 This makes things like sharp turns, roundabouts, bends, and dips easier to see, as well as expect ahead of time. The lighting system also works with GPS, both to identify road characteristics for the driver, as well as record the information for the next time the driver uses the same route.