Ford’s Mustang Mach-E isn’t set to reach dealerships until late 2020, but with prototypes already on the streets we didn’t say no when the automaker asked if we wanted a ride. Still wrapped in its design-diluting camouflage, the test-mule isn’t ready for drivers outside of Ford to get behind the wheel, but it was still enough to get a taste of what the Mach-E’s all-wheel drive powertrain is capable of.

While – like most people – I’m eager to see how the Mustang Mach-E GT performs, with its 459 horsepower and 612 lb-ft of torque, it was actually the Mach-E Premium that Ford had lined up for me. That will be offered in RWD and AWD forms, and with either the Standard Range battery or the Extended Range battery.

Power will vary from 255 hp through to 332 hp, and torque from 306 lb-ft to 417 lb-ft, depending on configuration. This particular test mule was AWD with the Extended Range battery, so delivered the maximum numbers. 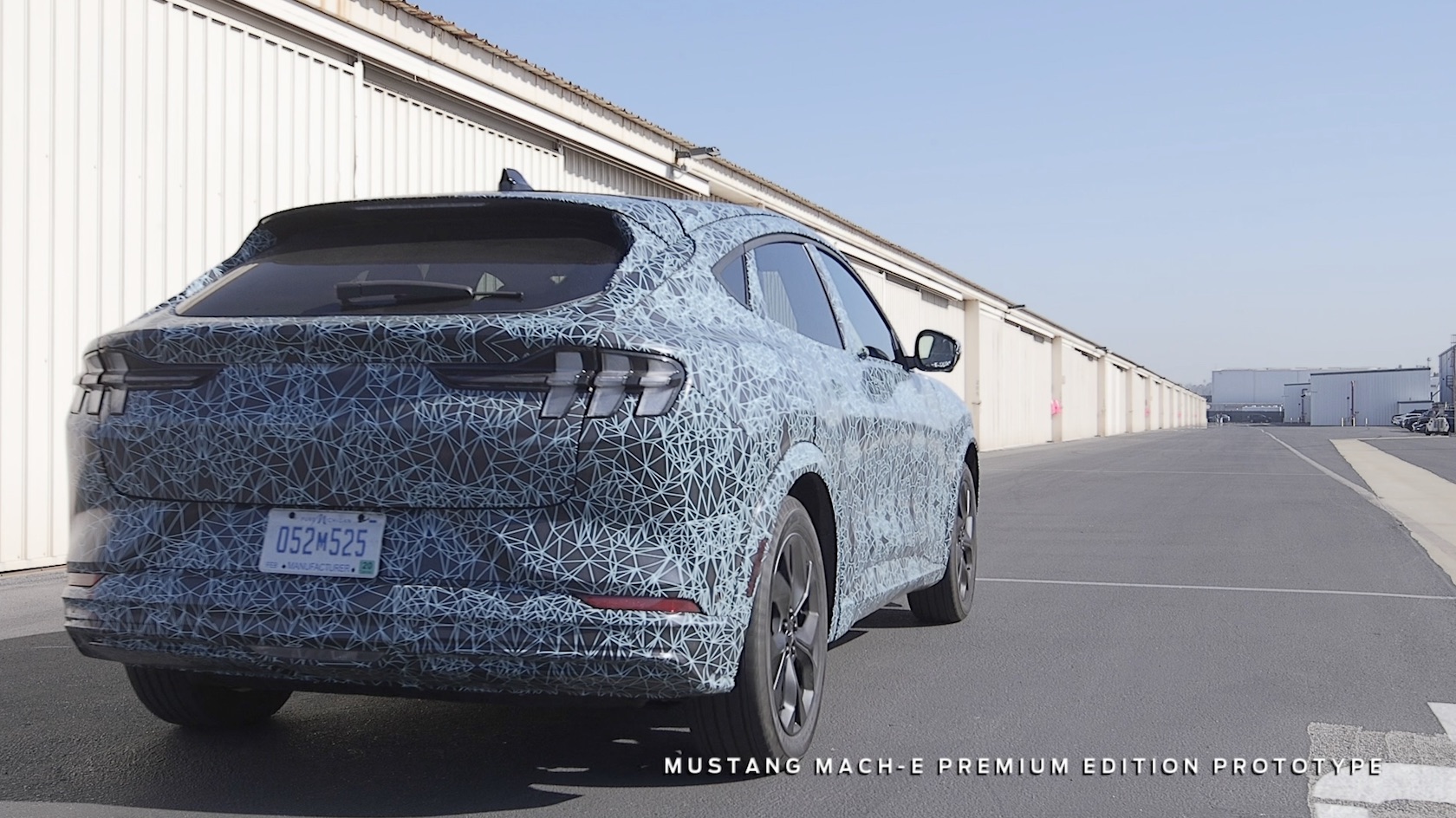 Rather than take the usual approach of putting the bigger motor at the front and then a smaller one at the rear, Ford flipped that around for the Mustang Mach-E. The car is predominantly rear-wheel drive, with most power going to the back wheels. How that power is laid down, meanwhile, depends on which of the three drive modes you have selected.

The default is Whisper, dialing down the urgency of the accelerator pedal and allowing the EV to coast more when you lift off, rather than slow dramatically under regenerative braking. Engage is the next step up, leaving the Mach-E to drive “the way you would expect a Mustang to drive,” Ford says. Power arrives swifter as you hit the pedal, and “everything is little bit tighter.”

Finally, there’s Unbridled – though I prefer “Stampede” which was, going by the earlier version of the software that the test mule was running, Ford’s first name for the mode – for maximum performance. That’s the most aggressive setting, with the pedal map designed to bring out the speed as soon as possible. It also offers the most aggressive regenerative braking, and indeed the Mustang Mach-E can bring itself to a complete stop without you hitting the brake. 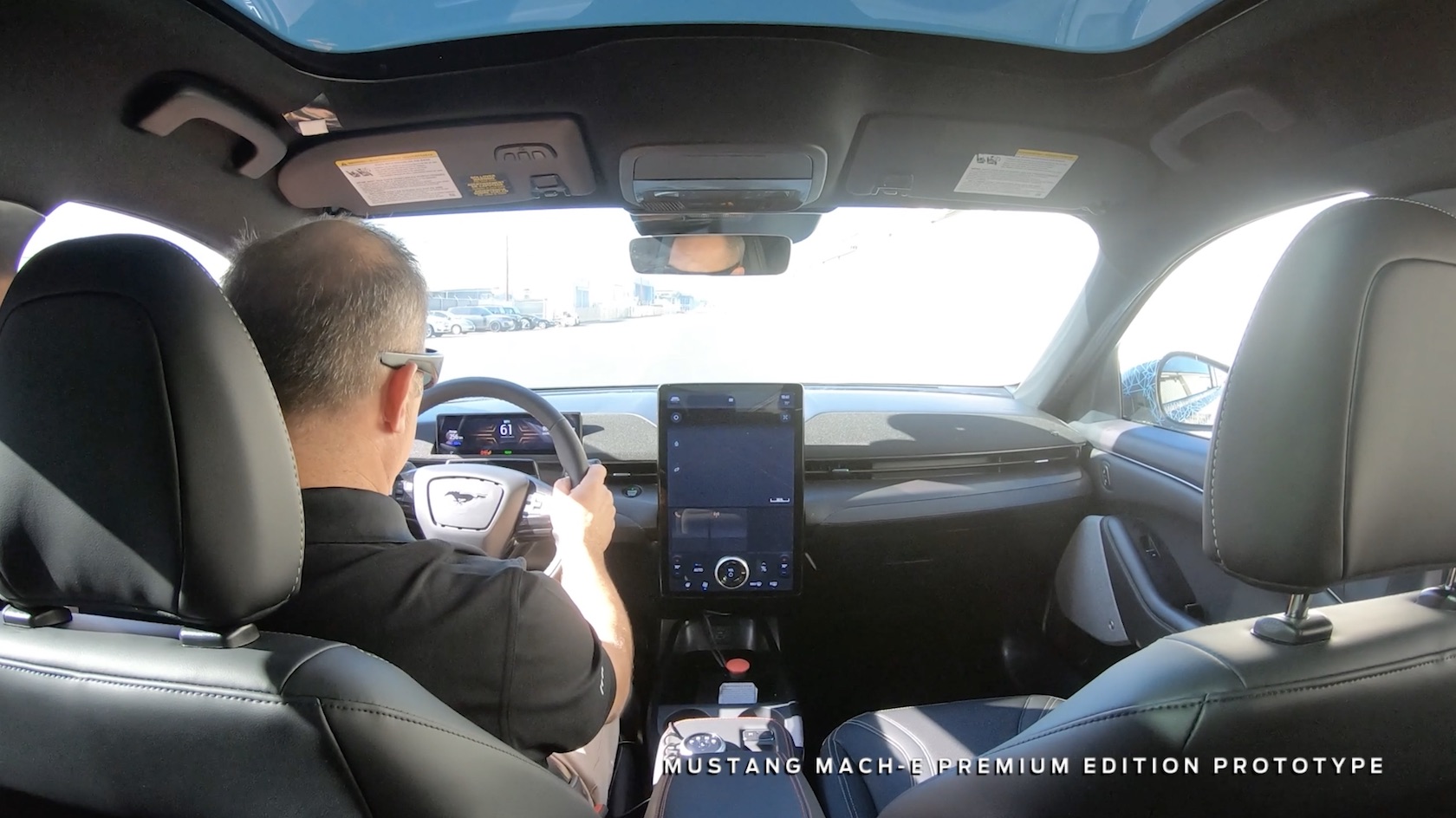 All three support some tweaking through the SYNC 4 interface. You can turn on one-pedal driving for Whisper mode, for example, if you want the more casual power delivery but still prefer stronger regenerative braking when you lift off.

The other difference between the three is the noise. Ford auditioned a huge number of sounds to pipe through into the cabin when the Mustang Mach-E is being driven in a spirited way, settling on a feisty whine that falls short of trying to ape a gas-engined car. You don’t hear it in Whisper mode, but Engage and Unbridled add progressively more of it when you lean on the accelerator.

Artificial noises in EVs are a controversial topic. Aside from the mandatory sound they have to play outside at lower speeds, to warn pedestrians that there’s a car approaching, there’s no clean consensus on what, exactly, an electric vehicle should sound like inside. Ford’s soundtrack is inoffensive and doesn’t seem out of place, but the good news is that you can turn it off altogether if you prefer. 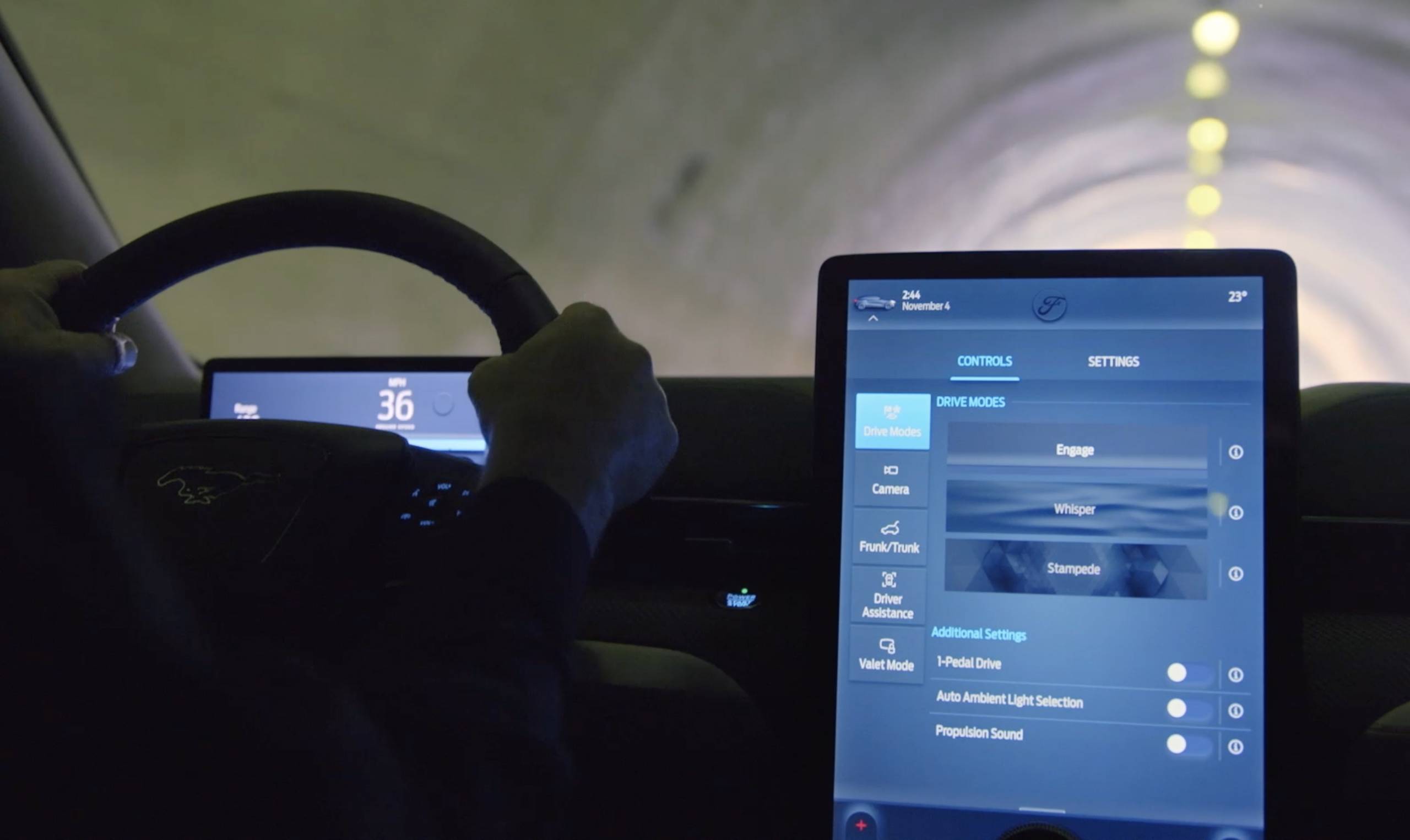 The test route set up was a microcosm of what the modern EV faces. A spin through Los Angeles traffic – including some opportune squirts of power to take advantage of gaps and make it through just-about-to-change signals – then a slalom course to represent more entertaining back roads. There’s no “Launch Mode” unlike in a Mustang Shelby GT500, but we did end the route with a 0-60 run.

Left in Unbridled mode for the whole (admittedly short) course, the Mach-E held itself well. The Premium may not be the most potent of the line-up, but the fact that – like all electric cars – the torque arrives instantaneously means it’s pleasingly nippy. Once into the slalom, what I noticed was how flat the car corners despite what weight it has to carry.

Ford isn’t talking exact numbers for the Mustang Mach-E’s curb weight yet, but like any BEV that battery pack takes its toll. It is, at least, mounted down under the cabin, keeping the center of gravity low. There was, unsurprisingly, some body roll still as a result; only the GT gets the MagneRide Suspension option. Nonetheless, it felt tight for a crossover SUV.

As for the final run to 60 mph, Ford is quoting something in the mid-five-second range as its target. I didn’t time it – and Ford wasn’t allowing recordings of the test ride – but it seemed somewhere in line with that. Top speed is an electronically limited 115 mph. Again, the GT will have the pace for true speed-addicts, with the automaker targeting somewhere in the mid-three-second range. 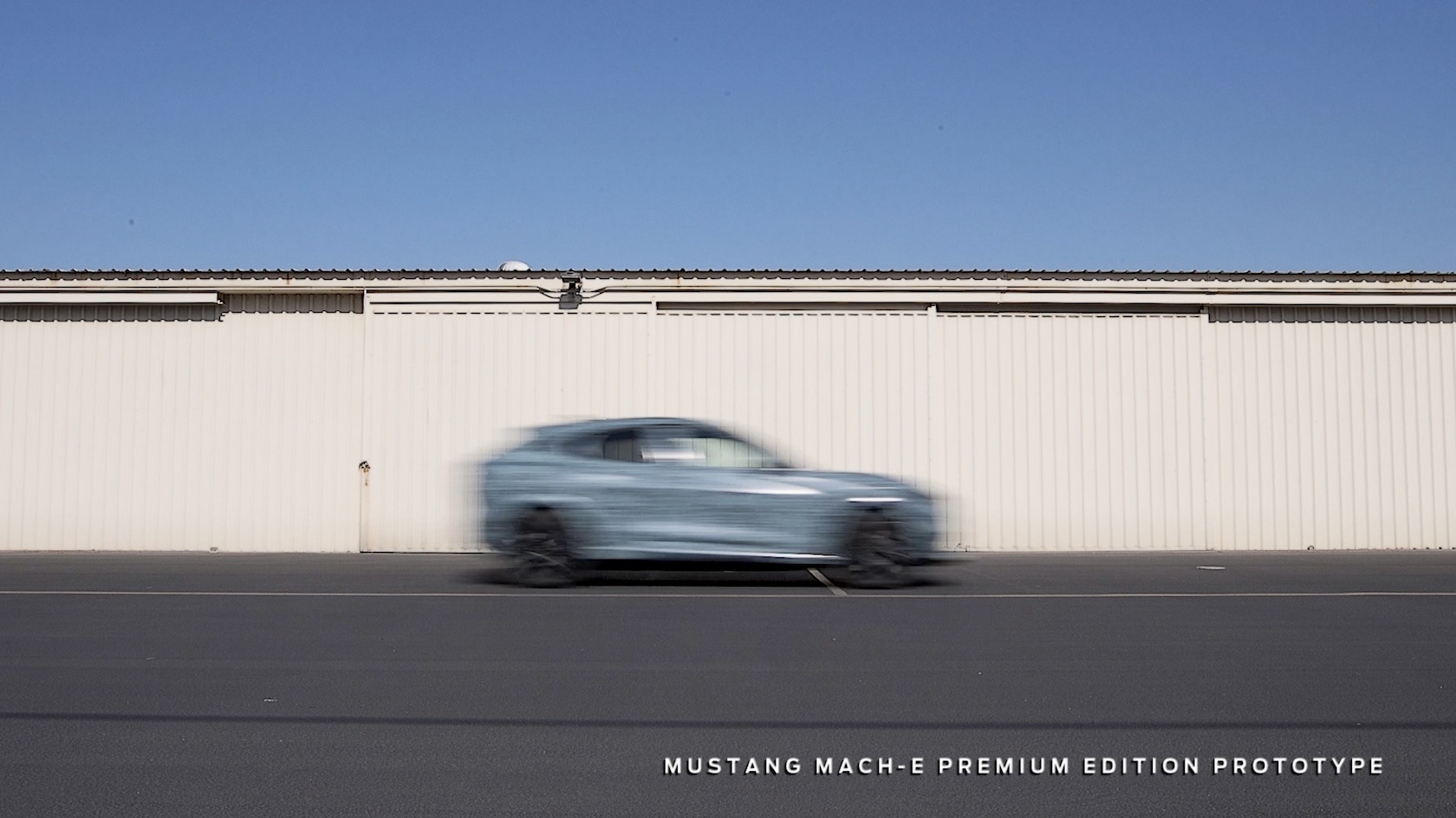 Given it was a test mule, I wasn’t expecting silence from the cabin when it came to squeaks and rattles. What was impressive, though, was how airy it felt with four adults inside. I’m 5’8 and, in the back seat, there was plenty of headroom under the panoramic glass roof. My seat mate, a more profligate 6’2, still had a couple of inches between the top of his head and the glass. Even with the batteries under the floor, you don’t feel lacking in legroom, either, or like your knees are up around your ears.

Clearly, there’s only so much you can tell from a short jaunt in a far-from-production car. It’ll also be interesting to see how the Mustang Mach-E holds up next to the Tesla Model 3, and the Model Y crossover which it’s a closer competitor to. That will have to wait a little longer, however.