Autonomous cars might count avoiding hurting pedestrians as a core safety skill, but Ford’s latest patent application covers what happens when it’s the vehicle at risk instead. Among the automaker’s most recently published filings is a system for “Detecting physical threats approaching a vehicle,” with the same sensors used for driverless navigation on the roads turned into a proximity alarm system. Indeed, Ford envisages the car even being able to deploy countermeasures.

The car could use 360-degree cameras to monitor what was going on around it, Ford suggests. That data could be fed into a neural network, specially trained to identify possibly aggressive or threatening behavior. That might be somebody wearing a mask or holding a weapon like a knife or a gun, or a dog baring its teeth.

Combined with tracking whether the potential threat is moving closer to the car or simply near it, Ford would be able to either act on the danger or simply monitor it. The countermeasures it envisages aren’t exactly James Bond-style hidden weapons or electrified door handles, mind. Instead, think along the lines of a more aggressive alarm system. 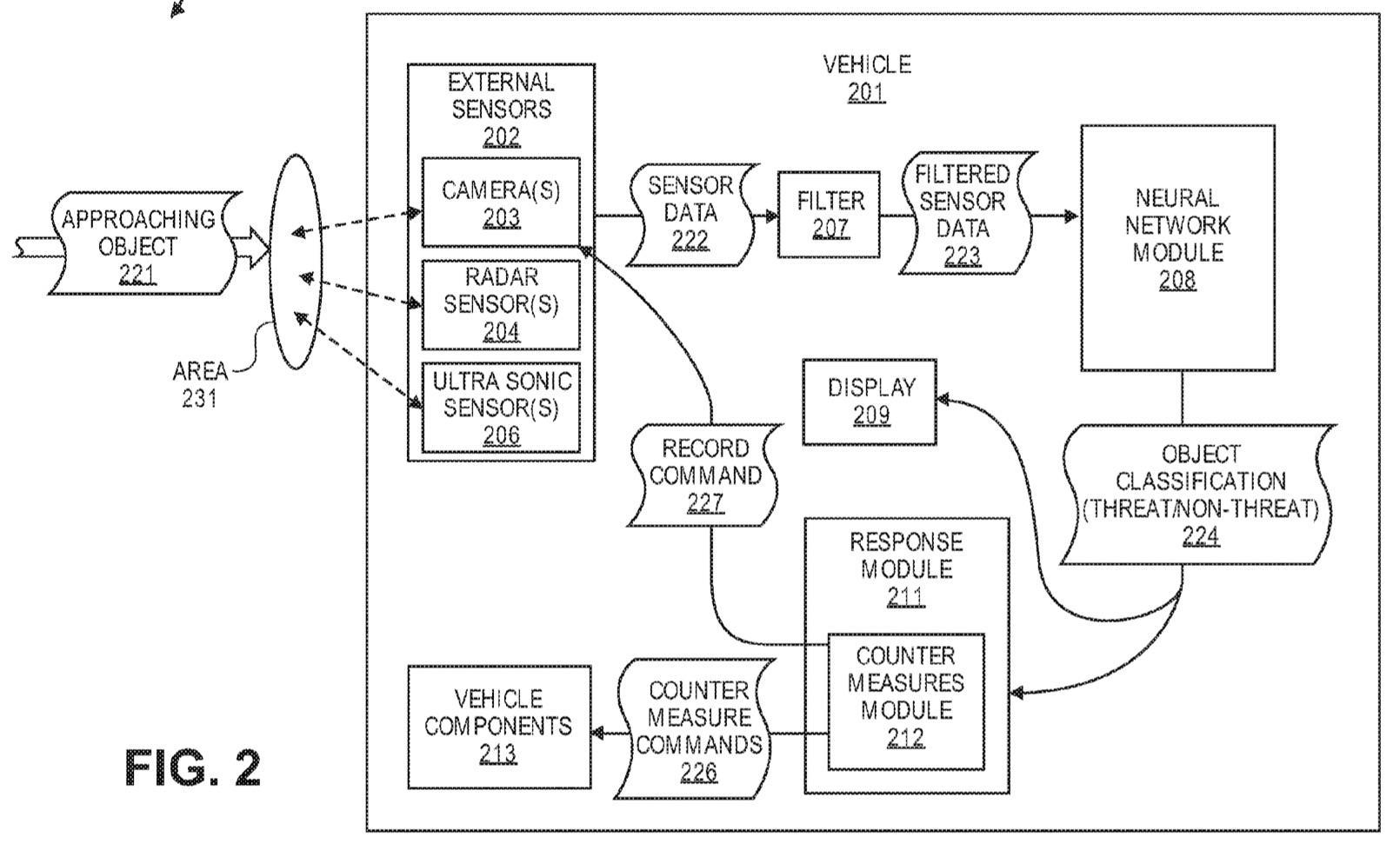 So, the car could act as discreetly as by locking its doors and issuing some sort of warning within the cabin to alert any occupants, or be more vocal in its alerts by flashing its lights and honking the horn. Video recordings of the hazard outside could be stored, too. “When a vehicle includes autonomous driving capabilities,” Ford explains, “the vehicle can automatically attempt to drive away from an approaching threat.

Ford doesn’t see the technology as solely useful for driverless cars, mind. The patent also explores how regular vehicles – with humans behind the wheel – might also benefit from their car keeping a watch on what’s going on outside. As Ford explains it, “when a vehicle is stopped or moving at a slow speed (and even if the vehicle is not near a roadway), external dangers to the vehicle and/or occupants are still present.”

It’s an interesting – and probably little-considered – aspect of road use, as drivers become less important to the operation of vehicles but the car themselves must coexist in urban spaces. Road rage is unlikely to go away any time soon, even if self-driving vehicles begin to rise in number. Moreover, as occupants of such cars grow comfortable in allowing the artificial intelligence to handle the driving, and use their time inside for other activities or even simply sleeping, there’s the possibility of an increased risk of things like car-jacking and kidnapping.

Ford’s patent application doesn’t necessarily mean an auto-evading driverless car is on the roadmap. However, it does highlight the potential for such systems beyond simply replacing flesh & blood at the wheel for trips from A to B.