Ford’s Active Drive Assist, its hands-free highway cruise control and lane-keeping system, has been priced up for the new Mustang Mach-E and 2021 F-150, though you’ll need to be patient. The Tesla Autopilot and Cadillac Super Cruise rival aims to best Elon Musk with more user-friendliness, while simultaneously putting the tech within reach of far more drivers than GM has managed so far.

Announced earlier this year, Active Drive Assist builds on Ford’s existing driver-assistance tech by encouraging drivers to take their hands off the wheel. Unlike most active cruise control offerings, which rely on some degree of contact with the steering wheel to reassure the system that the driver is poised and ready to take over should the need arise, Ford’s approach relies on eye-tracking.

A camera mounted behind the steering wheel tracks the driver’s gaze, to make sure they’re looking at the road ahead rather than sleeping or doom-scrolling Twitter on their phone. Assuming you’re on the 100,000+ miles of pre-mapped divided highway in North America that Active Drive Assist will launch with support for, the Mustang Mach-E or new F-150 will be able to keep pace with the vehicle ahead, and remain centered in the road. More roads that enable the system will be added over time, Ford promises.

It’s not the first eye-tracking technology we’ve seen in this segment, with Cadillac Super Cruise taking a similar approach when it launched several years ago. Still, it remains a rarity in the market, despite independent testing rating it more strongly than the alternative “torque on the wheel” approaches. The biggest problem with Super Cruise is that until now it’s only been available on one model, the discontinued CT6 luxury sedan; while GM is talking about expanding it to more than 20 models across its range by 2023, for the moment it’s both rare and expensive to get hold of.

Ford is looking to take a different approach. Active Drive Assist will be standard or “a relatively affordable option” on the new 2021 F-150 and 2021 Mustang Mach-E electric crossover, when they arrive later this year. The automaker estimates that it’ll sell over 100,000 so-equipped vehicles in the first year, based on its internal projections. 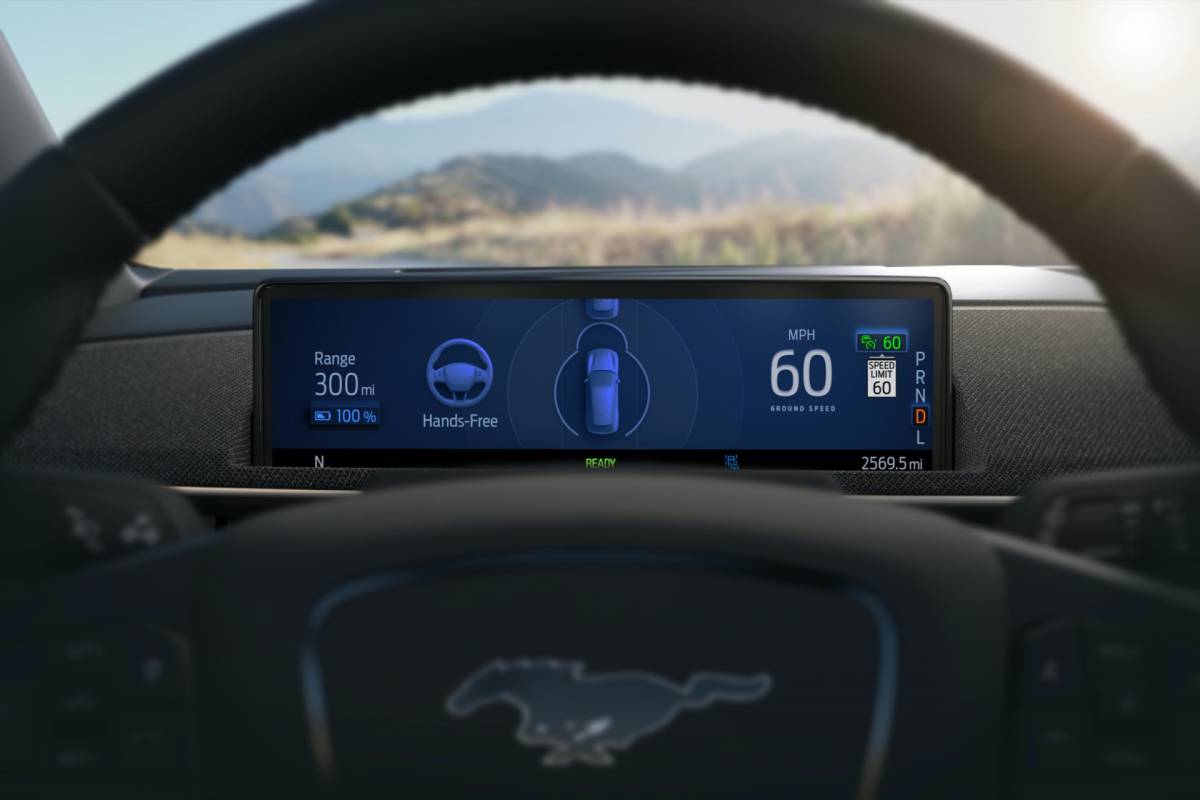 As for the Mustang Mach-E, Active Drive Assist will be standard on the CA Route 1, Premium, and First Edition versions of the electric SUV. The Mustang Mach-E Select trim will be able to add it as part of the Comfort and Technology package; that’s priced at $3,200, but also includes things like a 360-degree camera, and heating for the front seats and steering wheel.

The downside is that, while the two vehicles may be arriving this year, the software for Active Drive Assist won’t be ready in time. Instead, Ford will be selling cars before that point with the necessary hardware, then releasing the software as an OTA update later on. The current timeline for that is Q3 2021.

Early F-150 and Mustang Mach-E buyers will able to add the Ford Co-Pilot360 Active 2.0 Prep Package to their cars, and to sweeten the deal the automaker is offering discounts on that. F-150 buyers, for example, will get a $100 reduction on the hardware package, bringing it to $895. The software will then be $600 when it’s released, including three years of subscription to Active Drive Assist. Pricing after that three years has not been confirmed yet.