For Zero Motorcycles, a Tesla-sized opportunity to redefine EVs

Zero Motorcycles may not be the first electric vehicle company that comes to mind when you think of California transportation start-ups, but there’s more to the firm than just Tesla on two wheels. Founded back in 2006 in Santa Cruz, CA, the trajectory from passion project to internationally respected bike company has been a rapid one. With a new CEO at the handlebars, and more attention than ever on EVs and the future of transportation, I stopped by to take a tour of the production line and find out more.

Electric drive makes a lot of sense for motorcycles. In Zero’s case, the heart of each of its models is the Z-Force powertrain, a sealed and air-cooled unit with 116 lb-ft. of torque, comfortably more powerful than most 1,000cc gasoline bikes. It’s more high-tech than an internal-combustion engine, too, with Zero offering a smartphone app that, over Bluetooth, can adjust torque delivery, regenerative braking levels, and other parameters, as well as install new firmware. 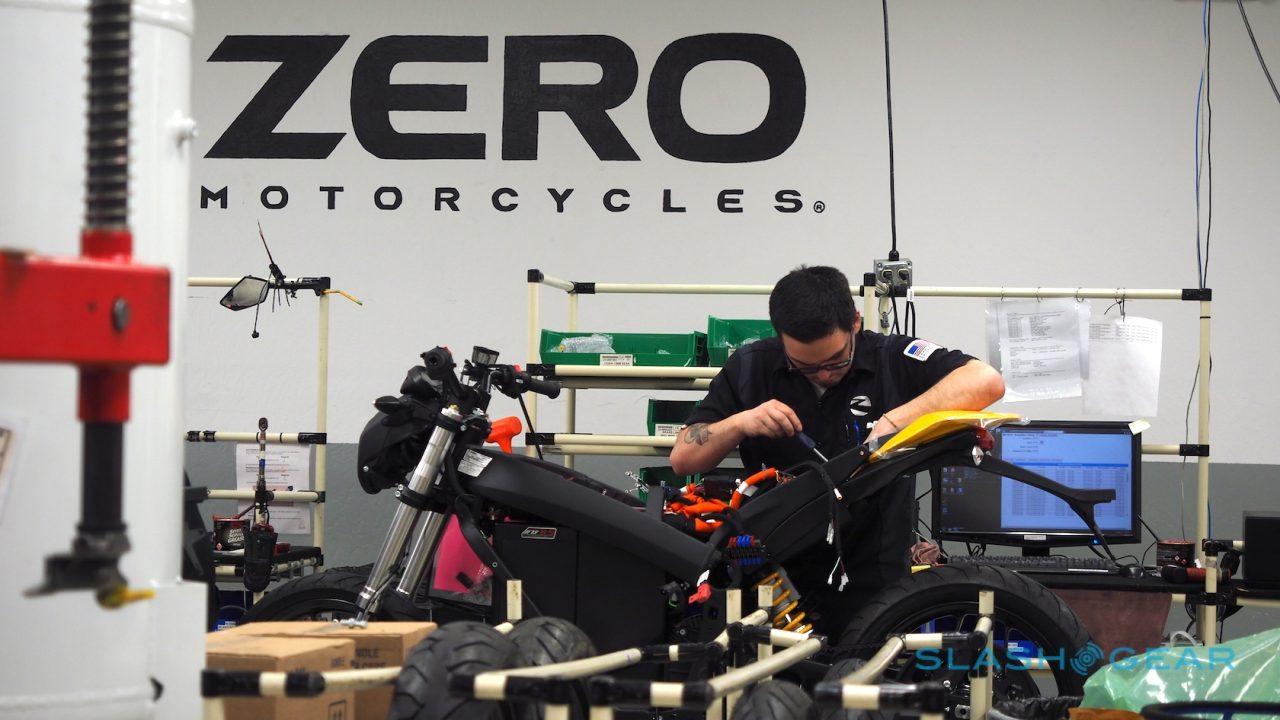 Initial criticism of the company’s bikes focused on range, and sure enough with roughly 40 miles to a charge those early models were only really niche commuter machines or weekend playthings. With the advent of its latest battery packs, however, some Zero models can go as far as 200 miles on a single charge. One or two of the company’s modular batteries can be fitted, depending on bike; some are hot-swappable, so you can quickly slide out an empty battery and push in a charged one.

Indeed, as the Z-Force powertrain has been refined, interest has spread beyond just Zero’s own motorcycles. The company now offers it as a turnkey solution for those who want their own full powertrain, as well as just the batteries, or only the motor and its controller. All are made in the same location, in a quiet retail park in California. 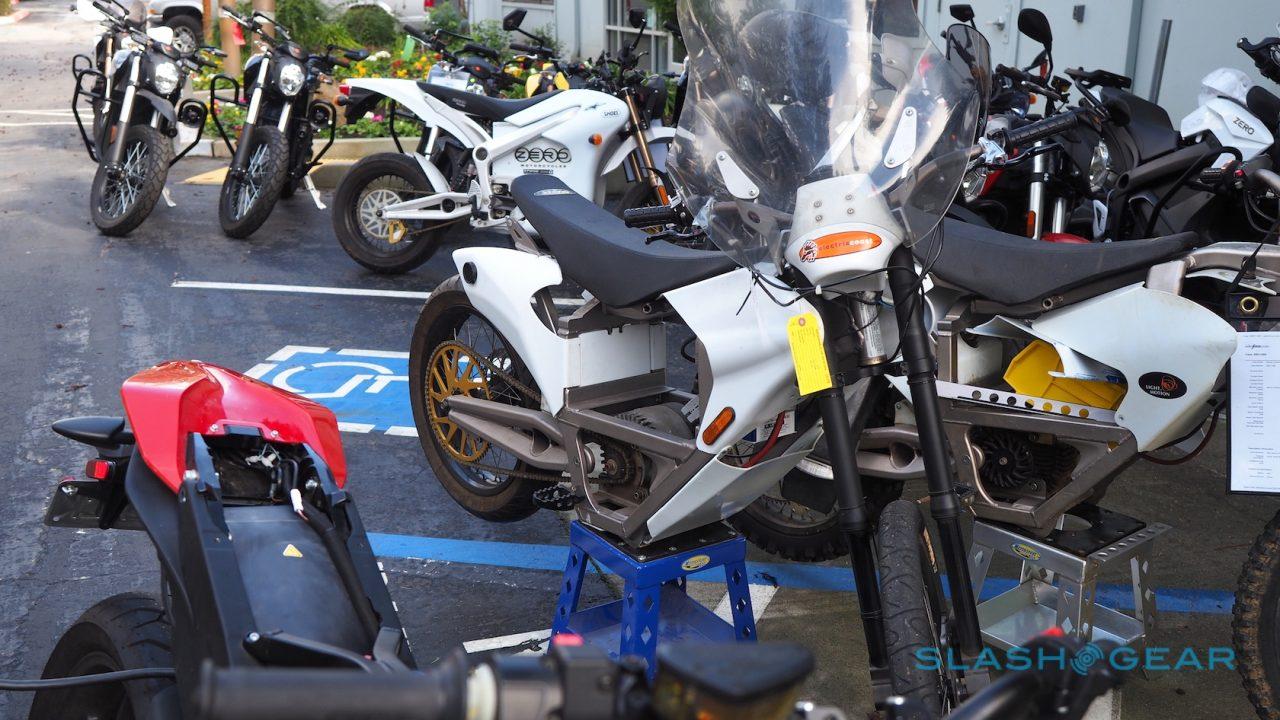 It’s an unassuming facility. Outside there are clusters of bikes, some dating back to Zero’s earliest models, looking little more than electrically retro-fitted dirtbikes. The company has expanded into the building next door, its production and office facilities sprawling as sales increase along with its range.

Pass through the beige cubicles of the open-plan office, however, and things take an turn for the technological. One of Zero’s proudest boasts is just how much it does on-site, and how well organized the production line is.

First come shelves of components, each logged into a computerized inventory system. Zero builds its bikes to order, each a custom creation, and each dealer’s request is logged into the system. As the motorcycle ticks its way through each station – first little more than a bare frame to which an electric motor is fitted, then gaining wheels, faring, and the rest – displays for each worker lists not only the parts involved but the process by which they’re installed and checked. 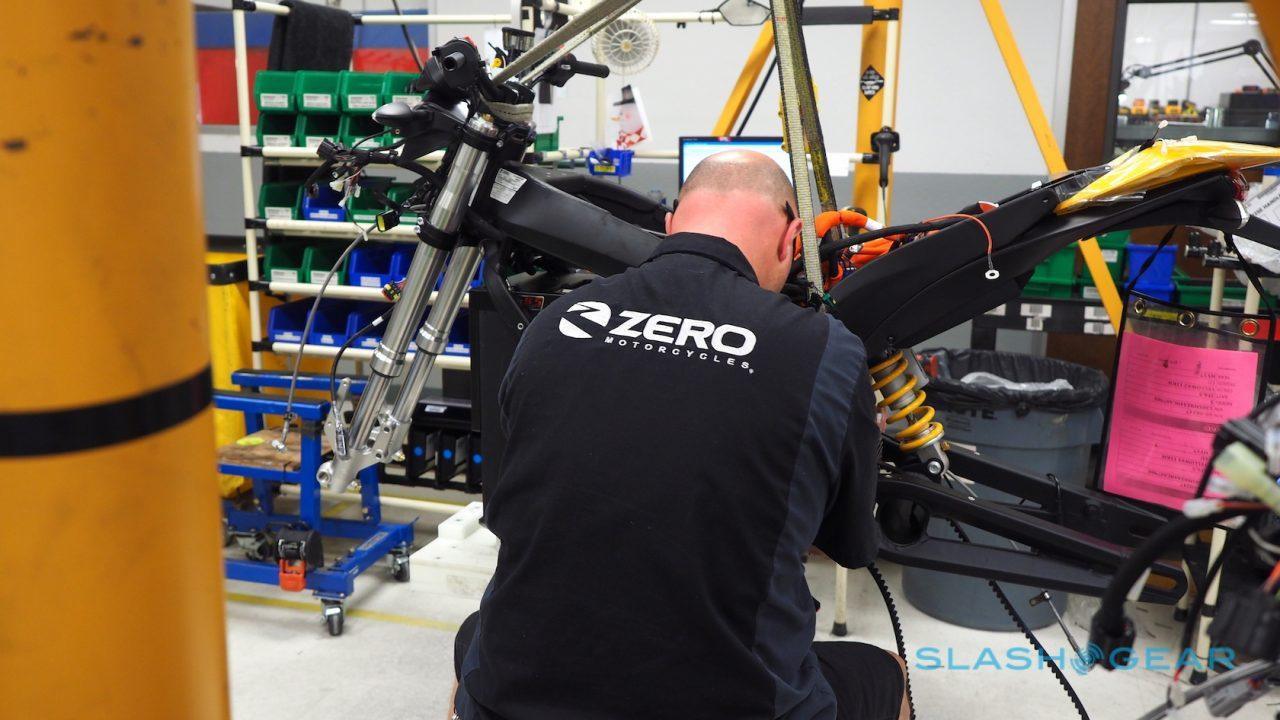 The promise, Zero tells me, is that the construction should be effectively foolproof. Electronic tools like socket wrenches and screwdrivers report torque and other metrics back to the system, which won’t allow the build process to move on unless everything has been assembled correctly. If a bolt is over-tightened, or not tightened enough, that has to be corrected before the all-clear is given to progress. At a time when “hand made” is fetishized but machine production appreciated for its consistency, Zero’s system is an impressive balance of the two.

Taking up space across one wall is the charge/discharge equipment. Zero buys li-ion cells but assembles them itself into its own power packs on-site, though in a separate building in respect of potential battery fires. After being charged up, hosed down to simulate inclement weather, and then checked to make sure they’ve held their power as expected, they’re moved into the main facility. There, they run through charge/discharge cycles on the calibrated chargers. 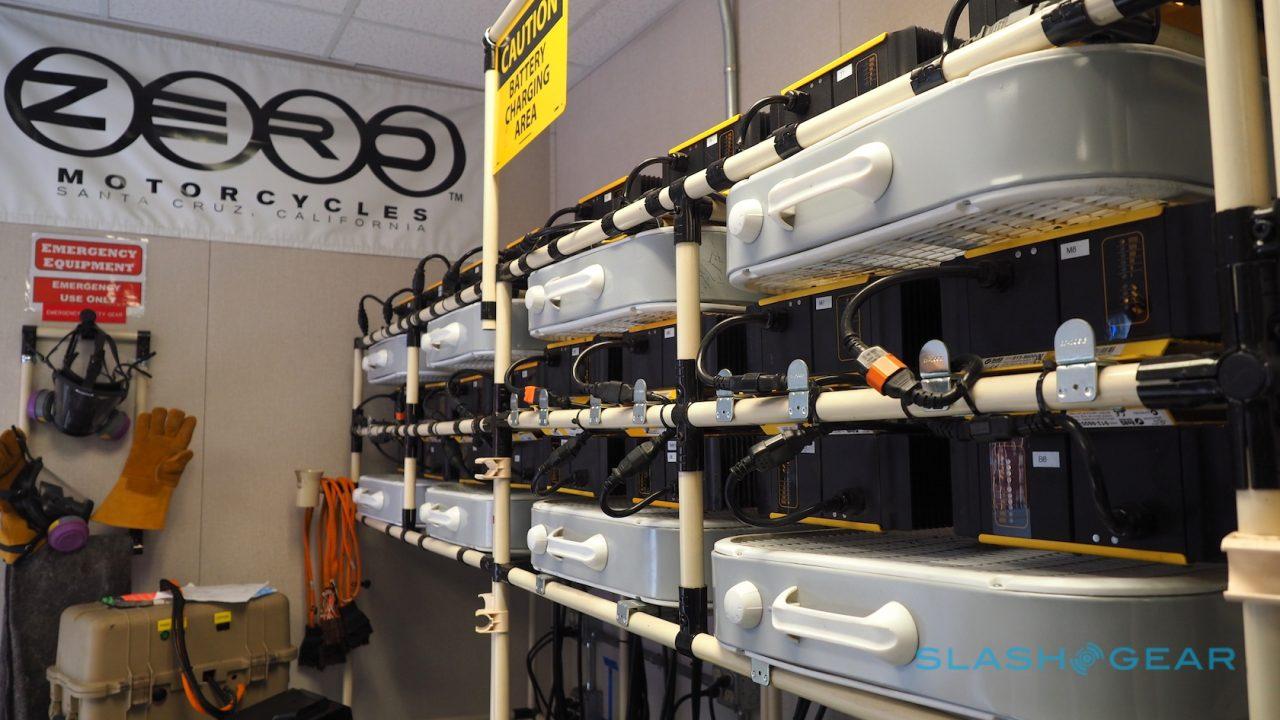 At the center of the workshop, surrounded by row upon row of completed bikes, there’s Zero’s own dyno rig. It’s there the team can do in-house testing of each model, with the system capable of simulating many different road routes to challenge the hardware. That’s part of a final test process that can see the motorcycle given the all-clear for shipping out, or alternatively sent back into the build process for checks, tweaks, or wholesale reconstruction. Since each one is safely logged in the computer, not only the model but each of the components that have gone into it and the people that have worked on it, the diagnostic process is much simplified.

Zero’s primary goal, the company says, is to address any potential issues before the bike meets its owner. After all, since all repairs are done in Santa Cruz, it’s a time-consuming process to bring a faulty model back after it has already been delivered. Should the worst happen, mind, the system stores every detail of each bike’s production, a valuable log which can be reopened and allow the returned vehicle to be slotted back into the line at the appropriate point. 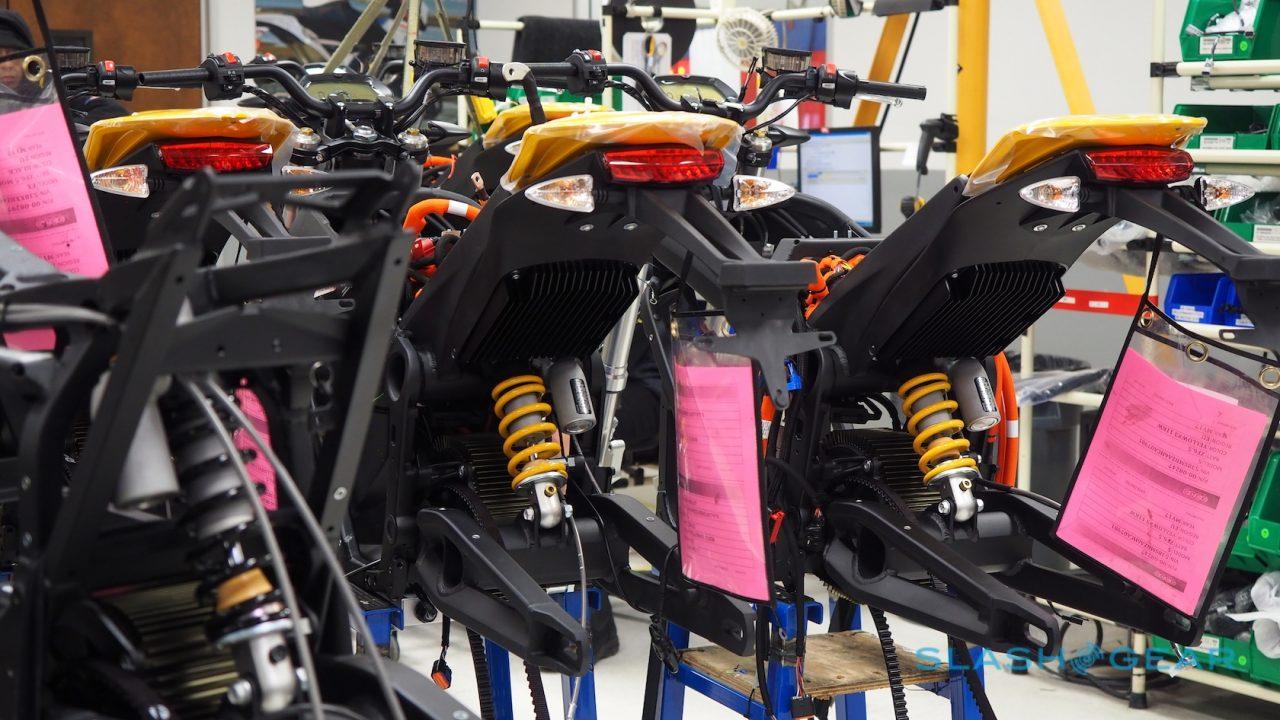 Private customers are, unsurprisingly, a big part of Zero’s clientele. Repeat business is significant, too. Yet there’s also a growing interest from government agencies: there’s a police bike package, for instance, which adds lights, sirens, storage bins, and crash bars as well as the appropriate livery. According to Zero, feedback has been strongly positive, both from police riders who appreciate the extended comfort and convenience of the EVs, and those in the locations they operate, where the lack of exhaust fumes and noise are appreciated.

What Zero has found, indeed, is that its bikes are a deeply experiential product: it can take just one ride to win even the greatest skeptic over. On the one hand there are the obvious benefits to electric powertrains that many are familiar from cars. Instantaneous torque and no gears to flick through. No need to line up at gas stations. 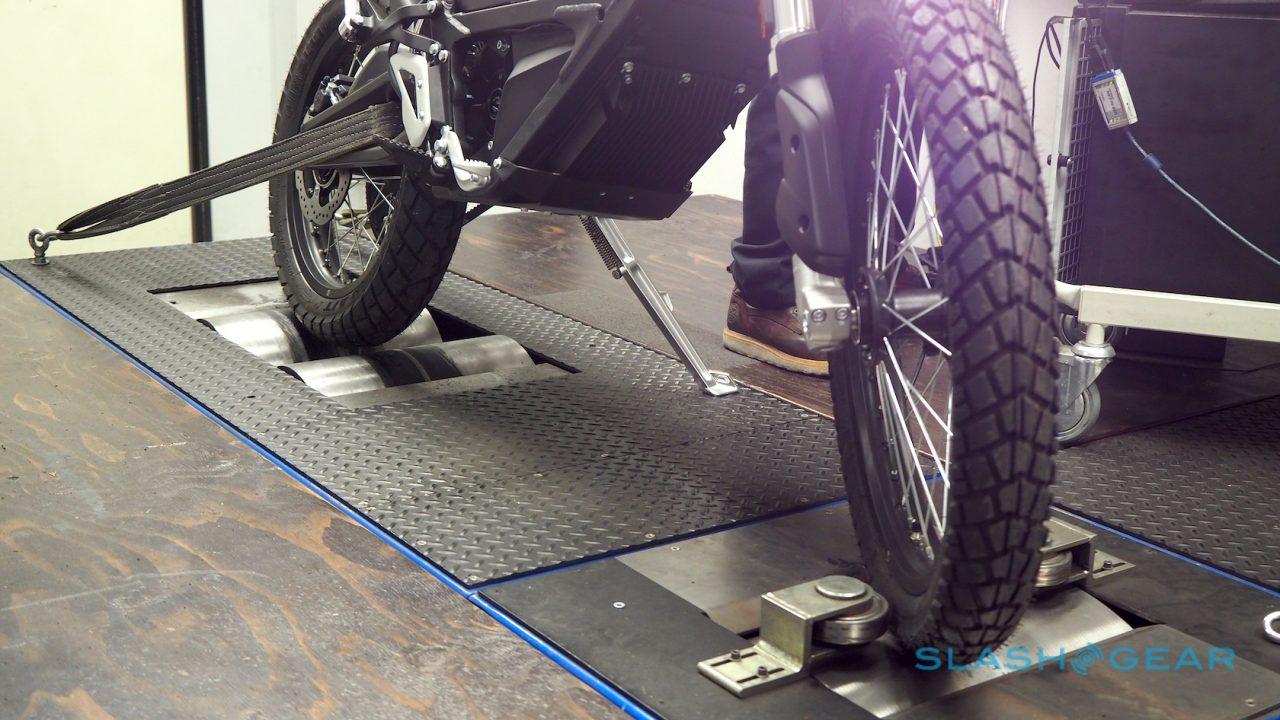 However, what often comes as a bigger surprise to established riders is how quickly Zero’s bikes highlight issues they have with their current, gas-powered models, yet hadn’t realized. The absence of noise and vibration, for instance, leaving little but the thrum of the motor and the rush of wind. Road trips of hundreds of miles or more, which might need to be punctuated with regular rest stops on a traditional motorbike, are far less strenuous and tiring on an electric version. Your hands don’t get numb from the vibrations, and your clothes don’t get sweaty from the heat of the engine.

As new Zero CEO Samuel Paschel explained it to me, only days into his new job, it’s all about “the things you didn’t know you didn’t know about internal combustion engines, laid bare.” That goes for his own encounter with the company’s product, as the former Skullcandy and Burton Snowboards exec rode the EVs for the first time. “I had the experience of riding the bikes,” he told me, “and that’s what sold me.”

“No heat, no noise, no vibration,” he listed. “All these things stripped away, it felt like what a motorcycle should be.” As Paschel sees it, Zero’s way forward is convincing would-be riders that the company is making “nothing more or less than the coolest way to get from A to B.” 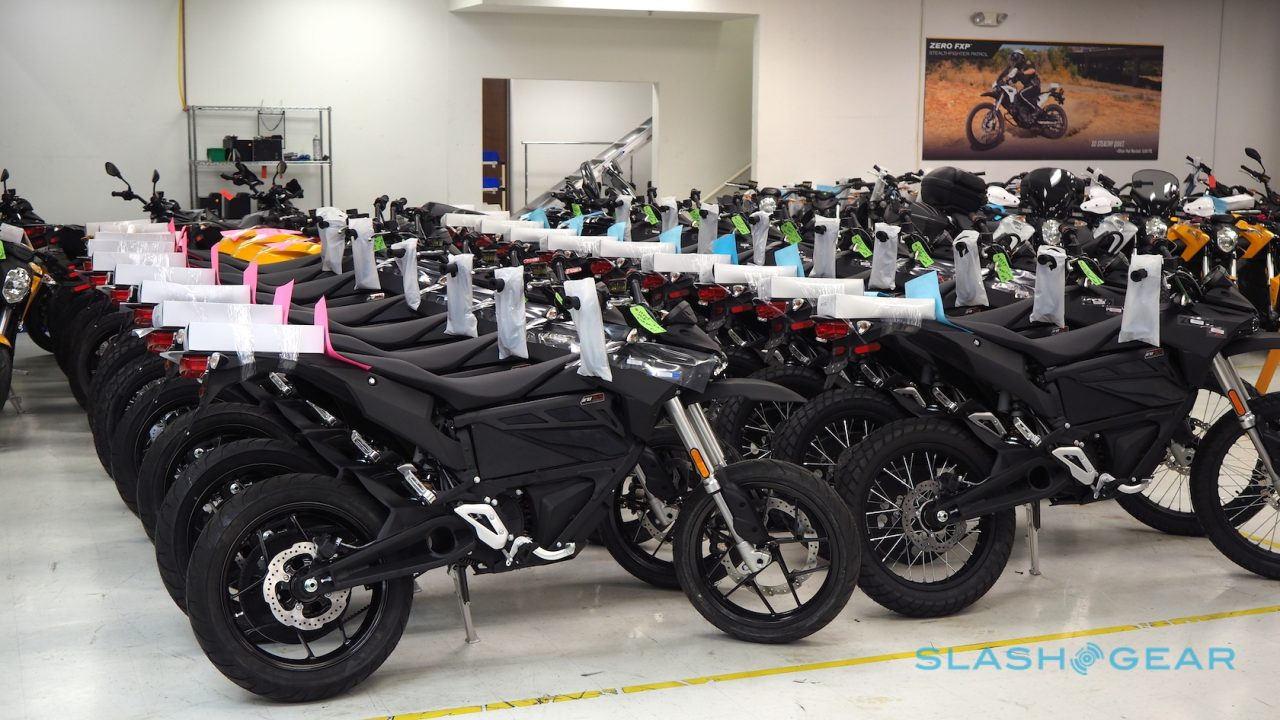 It struck me as strange, then, that Zero hasn’t taken the “last mile” of the retail experience into its own hands. Unlike Tesla, which has frustrated car dealers – and, it’s worth remembering, delighted buyers – by bypassing the typical model of vehicle distribution and opted instead to sell direct, Zero leaves that to a network of dealerships. For a company so focused on bringing as much of its production and engineering expertise in-house, that seemed a weirdly hands-off decision.

“We have about no control over that [dealership] experience,” Paschel conceded. “What we have is influence,” over education and passion. Zero Motorcycles may not have the same brand recognition right now as Tesla does, but the enthusiasts it counts among its owners are just as dedicated – some might say obsessional – as those worshiping at the Temple of Elon Musk. 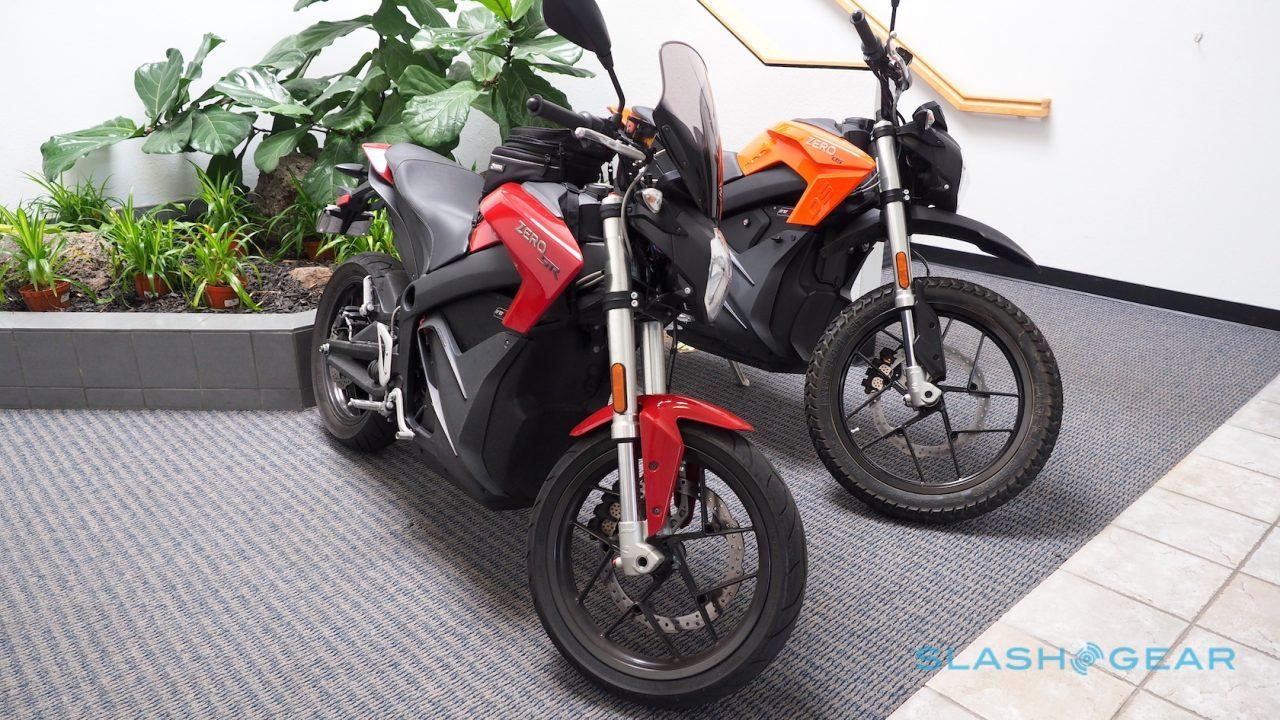 While you might think that makes Zero a Tesla competitor in the EV space, if only obliquely, Paschel is less concerned about such dynamics. “A lot of companies get caught up in this metaphor for competing to win, of war metaphors,” he argues. “Really, it’s the performing arts.”

If that’s true, it’s a performance with a fairly empty stage right now. Tesla may have just exceeded the market cap of General Motors, but the electric vehicle segment is still in its relative infancy, particularly if you’re limiting your scope to pure-electric rather than hybrids or fuel-cell models. 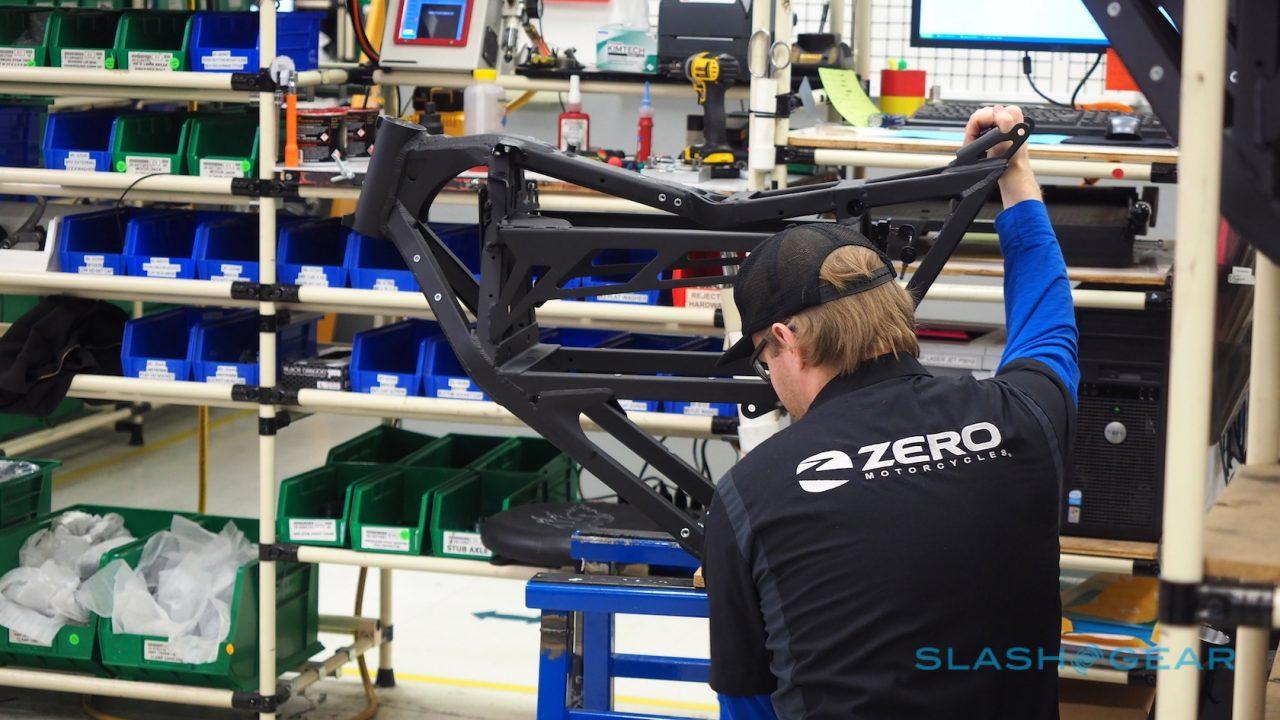 You’d be forgiven for expecting Paschel to have aggressive range-broadening plans for Zero as a result, building on the success of its current bikes with more variations. One possibility I asked about was trikes, with three-wheelers opening the door to carrying more batteries and thus achieving greater range for extended trips. That, the CEO says, comes down to consumer demand.

Though the number of options in Zero’s line-up may be fairly small, the company already has a “surprisingly broad range of customers,” Paschel points out. Clearly, it’s doing something right: as a private company, Zero doesn’t make its sales figures public, but demand is apparently up according to its new CEO and that makes the path forward clear. “The product plan today is obsessing about two-wheel vehicles.”