FloBi Shows Robots Can Have Feelings Too

No, not real feelings. Thankfully. But, at least they can try. Meet FloBi, a robot head that’s specifically designed to show a wide range of emotions, just by the doll-like features put upon it. Unlike a lot of robots out there that have “human-like” features, where testing for one particular reason or another is paramount to the robot’s very existence, that’s not necessarily the case with FloBi. As far as we can tell, it’s just a fun experiment for some students and researchers.

FloBi is being created out of a university in Germany, the Bielefeld University to be exact. What it does do, oddly enough, is not absolutely terrify us by its doll-like looks, and non-human appearance. Sure, despite the fact it’s showing some kind of expression, the robot still looks overall expressionless, but that may just be because of the design, and not the expression itself. The researchers are even able to change FloBi’s perceived gender by switching out some pieces here and there, thanks to clips and magnets. 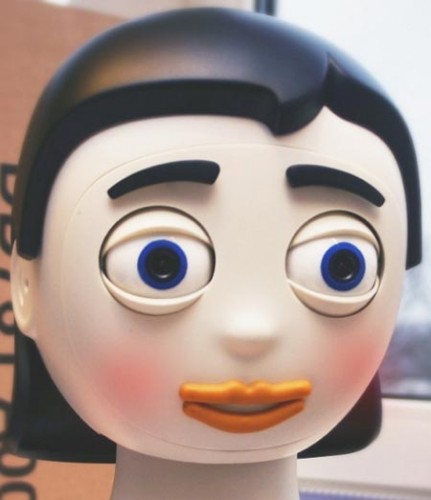 Between its head and neck, there are 18 movement points. There’s also a magnetic actuator inside the robot’s head that will move the lips. (If it starts talking on its own, we might have to call shenanigans.) The eyebrows, lips, eyes, eyelids, and neck can all move independently of one another, so that should add just a bit more lifelike behavior to FloBi, if that’s what you’re looking for. There’s cameras in each eye, and probably best of all, there are LEDs inside the robot’s cheeks that will help it reproduce a “blushing” feature. Yes, that’s right. FloBi can blush.