If headsets like Glass are pushing the wearable computing boundaries, then fitness monitors like the new Fitbit Flex are entry-level cyborg tech for the mass market. Announced back at CES 2013, and taking on Nike’s stylish Fuelband and Jawbone’s twice-refined UP, the Flex promises to track your performance whether you’re awake or asleep, along with real-time data transfer to your smartphone without a big hit on battery life. That’s even though the Flex is cheaper than UP, falling just under that all-important $100 boundary. Is this the health tracker we’ve been waiting for? Read on for the full SlashGear review.

Like both UP and Fuelband, Flex is intended to be strapped to your wrist. Unlike its counterparts, however, the logging dongle itself is actually separate from the band: a narrow, tapering lozenge of mostly white plastic, it slots into the rubberized strap leaving nothing but a row of five LEDs visible along the upper edge.

The strap itself is stretchy but Fitbit will still offer two sizes depending on how big your wrists are. By making the two parts separate, it means you can change strap color depending on your mood or outfit, if you so prefer, though it does introduce a little extra bulk. Nonetheless, the shape of the band is less annoying than that of Jawbone’s UP: the springy arms of UP get all too easily caught on clothes, for instance, and while the band looks good, it can be frustrating to wear. 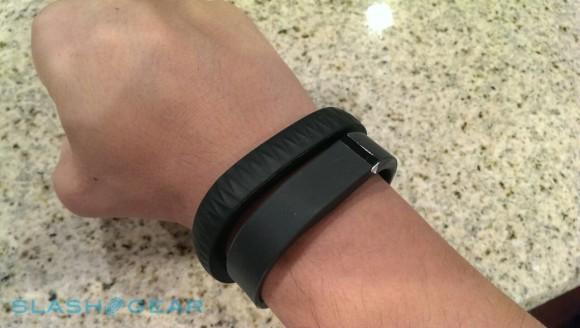 In fact, out of the three, Flex is the most comfortable and the most discrete. It’s water-resistant, too – as is UP – which means you can wear it in the shower or the pool, and the row of LEDs is a convenient, but low-power, way to keep an eye on your progress toward your daily goal. Each lit LED shows 20-percent progress; you tap the band with your finger twice to wake the LED display. 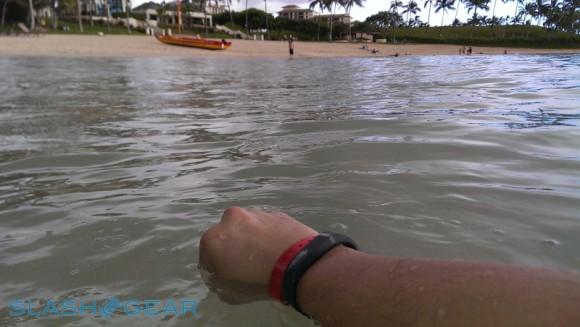 Bluetooth 4.0, however, is the key to the full data Fitbit is collecting. The latest iteration of the short-range wireless standard, it promises significantly lower power consumption than before, meaning devices like Flex can remain connected without sucking through their battery in a matter of hours. If the LED indicators aren’t giving you enough feedback, you can open up the Fitbit app on your phone or computer and see all the data there. Fitbit includes a Wireless Sync Dongle – basically a low-profile USB Bluetooth 4.0 adapter – for you to hook up your PC or Mac.

Flex’s criteria for activity tracking are pretty much in line with what UP and Fuelband record: steps taken, distance traveled, active minutes, and calories burned. Inside the Flex dongle are a battery of sensors and gyroscopes to figure out when you’re moving, along with what sort of movement you’re making. 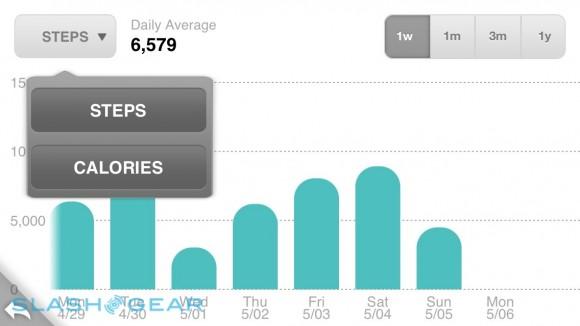 It’s worth making sure you’ve got the Flex strapped tightly to your wrist first, however, as we found a little extra play in the band was enough to throw off the accuracy of the tracking. After a day with it more loose around our wrist, we found we’d apparently done significantly more activity – at least, according to the Fitbit logs; the outlier day is outlined in the graph below – than had actually taken place.

There’s also food recording, though as with other platforms it’s a largely manual process. Fitbit claims to have more than 50,000 foods in its database, or you can add your own custom meals complete with nutritional information. The end result – if you’ve also set a weight goal – is a daily estimate of how many calories you’re allowed in order to stay on track, as well as an estimated date for when you should reach that goal, assuming you don’t cheat.

However, just as we’ve found with other fitness trackers, actually taking the time to punch in your diet can be frustrating, especially if you’re not eating the sort of easily-quantified foods Fitbit has in its database. If you’re making your own meals from scratch – sensible, if you’re trying to lose weight, since you know what’s actually going into them – then every mealtime will be a patience-trying session of calculations and figure-input.

Even when you’ve done all that, Fitbit’s recommendations are limited to suggesting you cut your calorific intake, rather than anything more comprehensive like a custom diet plan with attention to the various food groups. Until we can wave our smartphone camera at a plate and have it automatically assess that exact meal, we’re not confident food tracking will catch on in any great numbers.

Like UP, the Flex band promises to watch you while you’re sleeping and tell you the next morning exactly how well your night went. Repeatedly tapping the band for 1-2 seconds kicks it into sleep tracking mode – two of the LEDs light and then slowly fade to show it’s set correctly – at which point it monitors how long you sleep and how much you moved around. 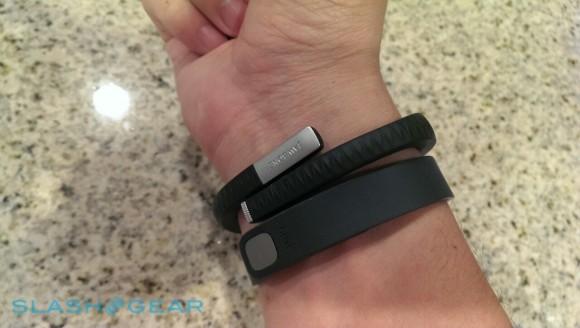 Unfortunately, sleep tracking is where we encountered the most issues with Flex. The band would consistently under-track our total sleep, on some nights recording as little as two hours of rest (and nine or more waking periods) whereas in fact we’d been sleeping for considerably longer. Where UP differentiates between light and deep sleep, Flex only sees resting in black and white, and while you can go back into the app and retroactively add sleep details (useful if you forget to turn sleep mode in in the first place) the general inaccuracies don’t exactly encourage you to use it. 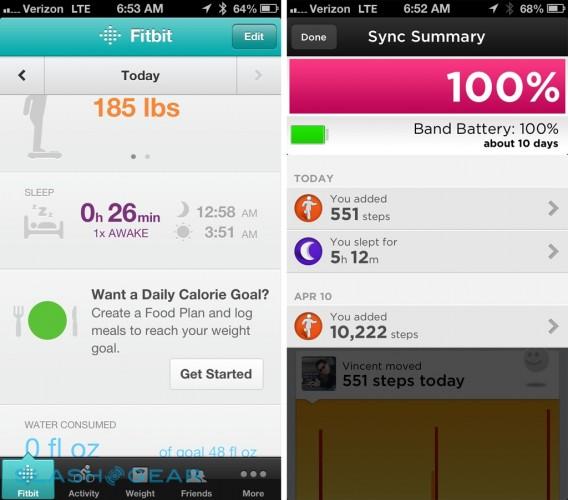 We ran a direct comparison between Flex and UP, wearing them both overnight. As you can see from the results above (Fitbit on left, Jawbone on right), the Flex counted considerably less sleep than the UP: an incorrect 26 minutes, compared to the more accurate 5hrs 12m on the UP.

Real-time updating is the big advantage Flex has over its wearable rivals, and you’re most likely to access those from a smartphone display. Fitbit does support desktop sync, but to really get the benefit of knowing exactly where you’re up to with your goal, the mobile apps edge ahead.

Fitbit has apps for both iOS and Android, though if you’re a user of Google’s platform you’ll need to have one of a fairly limited number of phones in order to actually use it. While the iPhone 4S, iPhone 5, 5th-gen iPod touch, iPad 3, and iPad Mini all support the Flex sync app, currently only the Samsung Galaxy S III and Galaxy Note II work with the Android app. We tried it with the Galaxy S 4, for instance, and the option to synchronize simply wasn’t present; Fitbit tells us that’s down to the different Bluetooth 4.0 implementations between Android manufacturers. 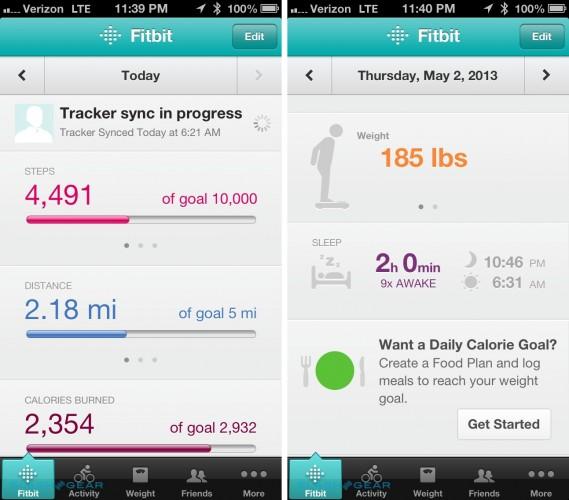 Assuming you have a compatible device, you see a timeline of your weight, sleep, and activity, as well as details from any friends who also use Fitbit and who have shared their progress with you. A public record is published online, though you can choose to pare back any of the specific activities, goals, and other information if you don’t want them to be generally visible. Each of the progress made toward your step, distance, and calorie goals is shown on a progress bar; it’s worth remembering, though, that Flex is only really tracking steps, and then calculating the probable distance and calories from that.

The app is also where you set silent alarms, with up to eight supported at any one time. Rather than a blaring notification from your phone on the nightstand, the Flex band vibrates and flashes its lights to tell you to get up. There’s support for one-off alarms and for repeating ones, such as on weekdays at a certain time, but still letting you sleep in at the weekend.

Unlike with UP, you don’t get the sleep-related alarm option (which promises to wake you when you’re in the phase of sleep most conducive to feeling bright), though it’s worth noting we had mixed results with that anyway. However, whereas UP must be plugged into your phone to set its alarms (or, indeed, sync its data) Flex can be controlled remotely over Bluetooth, a less fiddly affair that meant we made greater use of the alarm functionality.

Fitbit may be trailing UP and Fuelband to the market, but it arrives with a price advantage. The Flex is $99.95, $30 less than the Jawbone version, and 50-percent less than Nike’s premium-priced Fuelband. That’s despite it using low-power Bluetooth; the Fuelband has Bluetooth too, but it sucks down battery life unlike the Flex. 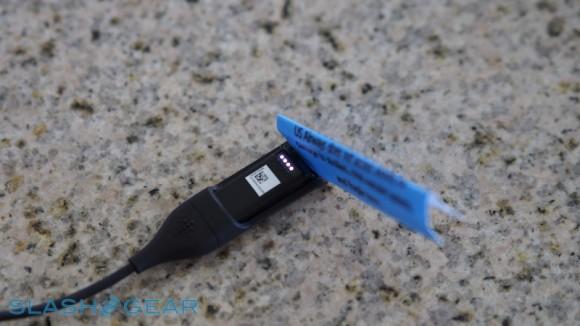 In fact, Fitbit’s battery estimates of 5-7 days turned out to be reasonably accurate in our experience, with the Flex lasting 5-6 days of average use. Fitbit supplies a special charging cable to refuel the Flex, though it quickly proved a frustration. The dongle is held in place against the charging contacts by a clip, but we found it was insufficient to actually keep the Flex in place. The only way to actually get it to charge consistently was to wedge a piece of paper or something similar in the gap too, pressing the Flex against the pins.

In some ways, the Fitbit Flex is the best mainstream health tracker out there. It’s the most comfortable, has the best balance of wireless connectivity and battery life, and – for daily fitness recording, anyway – does exactly what you want to to, assuming you’re wearing it properly. The addition of Bluetooth 4.0 addresses one of our biggest complaints about the Jawbone UP: that there was basically no feedback about our performance during the day, until we plugged the band into our phone. 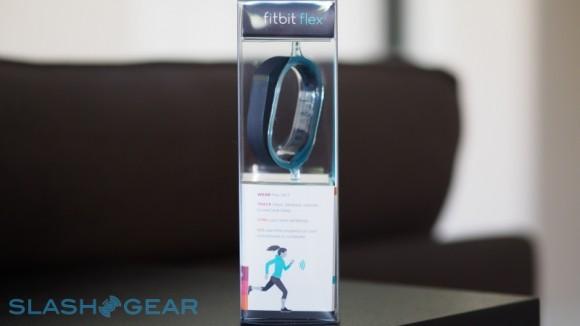 Nonetheless, the Flex isn’t perfect. Like all of these trackers, it calculates much of its data – calories, distance traveled – from a few fundamental factors, which means they’re not infallible. More disappointing is the poor sleep tracking functionality, which pales in comparison (and accuracy) with other models.

If you’re keen to measure your sleep routine, we’d still recommend the UP. However, for everything else, the Flex has the advantage. It’s more comfortable and easier to use than the UP, and considerably cheaper and with better Bluetooth implementation than the Fuelband. If you’re looking to get into wearables, that makes it a great place to start.