Scientists have reportedly known that lightning emits radiation within it for quite some time, but unfortunately for those scientists they have been unable to take any kind of x-ray photographs of the event. It simply moves too quickly, and up until recently, there simply hasn’t been an x-ray camera that was able to take the necessary shots to capture lightning in mid-strike. That is, until now. A giant x-ray camera, which was created by a graduate student named Meagan Schaal, has been the first ever to capture a lightning strike with an x-ray camera.

The photograph was taken during a batch of recent thunderstorms at Camp Blanding, in Florida. The lightning bolt streaked down from the sky at almost one-sixth the speed of light, but the camera was able to capture it. Joseph Dwyer, who is a lightning researcher at the Florida Institute of Technology in Melbourne, said, “Something moving that fast would go from Earth to the moon in less than ten seconds.” Obviously, finding a camera on the shelf wasn’t going to cut it, so Dwyer turned to his students. One of his graduate students, Schaal, managed to create the x-ray camera. It weighs in at 1,500 pounds, and it is made of an x-ray detector that’s housed in a box that resembles a refrigerator. It’s lined with lead, to make sure that the x-ray detector is kept safe from stray radiation.

How many images does this new camera have to take to capture lightning in its natural state? 10 million per second. Unfortunately, storage of so many photos meant that the images couldn’t be all that detailed. The camera can only take 30 pixels. Meaning, the results are images that are produced on a hexagonal grid. However, the researchers were able to learn that lightning carries the majority of its x-rays at the head of its strike, with barely any lingering radiation trailing away. Dwyer confirms that the lightning’s strike holds all of its x-rays at the tip, rather than through the entirety of its length. 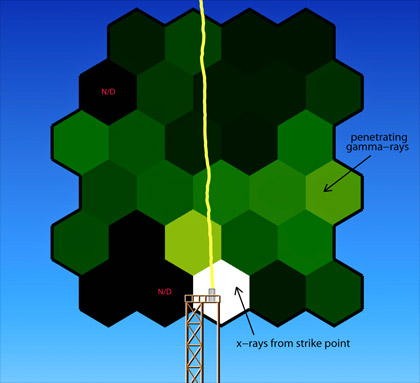 One thing to note, is that while these tests were being run during thunderstorms, the scientists had to make sure that the bolts struck where the camera could capture them. For that to happen, the researchers had to shoot rockets into the thunderstorm’s clouds, with wires trailing behind them, making sure that the lightning would streak down the wire and into the camera’s field of view. With that being noted, Dwyer points out that this artificial creation of lightning probably had no affect on the results, and if they could reproduce a truly natural strike, he is confident the same conclusion would be revealed.