Wait, what? You might be asking yourself what inspired a hacker by the name of George Hotz to build his own self-driving car. That’s what we wanted to know, too. It would seem that Hotz decided to kick out a self-driving car using a 2016 Acura ILX in “about a month.” He’s using Ubuntu Linux as his operating system and has an absurdly massive 21.5-inch display sitting in the middle. A flight navigator joystick rests between the front two seats which, when triggered, engages a fully operational self-driving vehicle system.

Hots spoke with Bloomberg earlier this year for a report this week, showing reporters what his vehicle can do out on the highway back a few days before Thanksgiving. The vehicle is nowhere near a production-level sort of setup, looking more like Hotz ripped the cords out of several machines and bashed them together inside his vehicle – but it works. It all works.

“Don’t touch any buttons, or we’ll die,” said Hotz to his guests before they hit the road. Watch the video below to see what’s going on:

The Hotz setup works with six cameras, two near the rearview mirror, two on the sides, one on the back, and one fisheye camera up top. He suggests he’s aiming to create a camera and software package for $1,000. To automakers. And consumers. 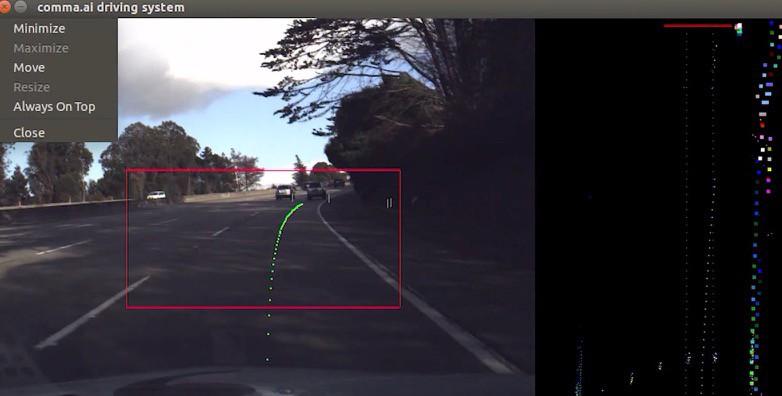 Hot also suggests that he’s met Elon Musk and has spoken with him at length about AI technology and Tesla’s self-driving technology. “There was a proposal that if Hotz could do better than Mobileye’s technology in a test, then Musk would reward him with a lucrative contract,” said the Bloomberg piece, “Hotz, though, broke off the talks when he felt that Musk kept changing the terms.”

“Frankly, I think you should just work at Tesla,” Hotz says Musk wrote in an email, “I’m happy to work out a multimillion-dollar bonus with a longer time horizon that pays out as soon as we discontinue Mobileye.”

“I appreciate the offer,” replied Hotz, “but like I’ve said, I’m not looking for a job. I’ll ping you when I crush Mobileye.”