First iPhone 7 Lightning to 3.5mm adapters spotted in the wild

It’s long been rumored that the iPhone 7 will be losing a big feature when Apple announces it later this year. It may prove one of the most controversial changes that the company has made to the smartphone, as people have already been up in arms about it. After all, nearly every pair of headphones uses a 3.5mm jack, so what will customers do if Apple takes that port away?

The most obvious answer is to simply pay for new headphones that use a Lightning connector. Of course, if you really like your existing headphones, or you just don’t feel like spending money unnecessarily, then that isn’t really an option. But a couple of companies in China are already preparing for the seemingly inevitable change. And they want you to keep using your old headphones.

A few devices have been spotted that promise to let your old 3.5mm headphones play nicely with Apple’s future phones. While the devices may only be prototypes, they give us an idea of what we might expect.

The first accessories look a lot like the smaller portable phone chargers that you can buy almost anywhere these days. They have a Lightning connector to plug into your phone, and what appears to be a pass-through Lightning port, so you can actually charge your phone while listening to music. Aside from that, there is a 3.5mm port, and a three buttons that appear to be for power and muting the line. 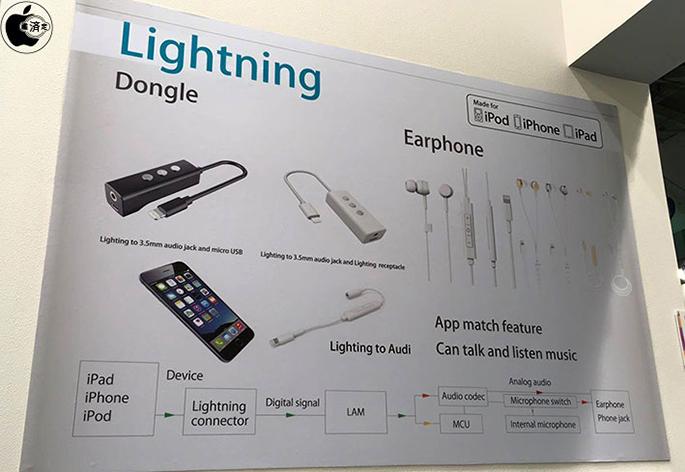 These look terribly bulky, and hopefully other manufacturers take note of what not to do. The boxes look too big to stay plugged into your phone without being held onto. Otherwise, they would just unplug themselves with little more than gravity at work.

Another adapter was spotted that looks more like what I would expect. It’s just a cable with a Lightning connector at one end, and a 3.5mm port at the other. Three buttons in the middle appear to control volume and muting your mic. The only downside to this one is the lack of a Lightning pass-through.

Also pictured are some Lightning earbuds, which are pretty basic, and probably similar to what Apple will end up pairing with their next iPhone.

These are the first adapters that we’ve seen, so they give us an idea of what sort of accessories that we’ll see, to allow us to use our existing headphones, instead of buying brand new ones just for our phones. Of course, there’s always the possibility that Apple could include or sell an adapter themselves. Only time will tell, however.