Kia has shown off the first official images of the next-generation Sorento SUV ahead of its official public debut. The public debut of the SUV will happen at the 2020 Geneva International Motor Show. Kia says that its designers used a concept of refined boldness to design the SUV.

The designers were aiming to keep the robust, tough-looking aesthetic of earlier models while applying more refinement and elegance to the design. The result is a Sorento that is more sculpted than its round-edge predecessor. Kia describes the vehicle as having contemporary geometric details and more swept-back, elongated proportions than its predecessor.

The new Sorento gets a new interpretation of the Kia “tiger nose” grille that wraps around the integrated headlights on each side. The headlights have a new “tiger eye” LED daytime running light. The new running light gives extra focus to the design.

Kia also worked on the inside of the new Sorento as well with what the designers term a “sophisticated” new design. The design uses a new upscale style with an improved infotainment system and premium materials. Kia says that the Sorento will get one of the highest quality interiors in a Kia so far. It features embossed wood-effect surfaces. 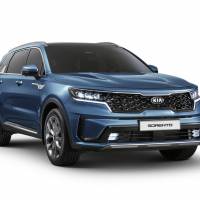 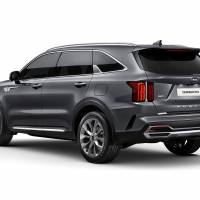 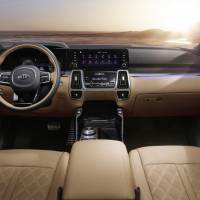 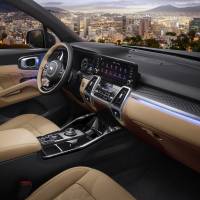 The infotainment screen is a 10.25-inch unit with AV navigation. It also has a 12.3-inch digital instrument cluster. Kia says that the overall design of the new Sorento is the result of a collaboration of its design network in Korea, Europe, and North America. Sorento is based on an all-new platform that promises to raise standards in the midsize SUV segment. The official debut of the new Sorento will happen on March 3, 2020.