Mozilla has just rolled out version 35 of the popular Firefox web browser and it is bringing in a handful of new features. Highlighting this release, however, is something that they have been working on for quite a long time now. Leveraging the power of what is called WebRTC (Real Time Communications), Firefox Hello lets users create and share video chats without the hassles of third party accounts, services, or plugins. All you need is a Firefox browser, and sometimes you don’t even need that.

You will need Firefox to start a Conversation, which is Mozilla’s term for a specific video chat thread, and that’s about it. The person on the other end of the line doesn’t even need to be a Firefox user. All he or she needs is a browser that supports WebRTC, which at the moment only includes Chrome and Opera aside from Firefox. Oh, they might also want to have a computer with a webcam and mic as well, of course.

Firefox Hello revolves around ease of use, especially in setting up a Conversation. All a user has to do is to start one and then email or copy the unique URL of that conversation to people she wants to invite. One can even name a conversation for easier identification later. Any time those conversation partners want to strike up a conversation again, they can simply reuse that same link to open up that conversation. No need to create a new one every time.

When upgrading to Firefox v35, the Hello button might still be hidden in the Customization panel, so users will have to first explicitly add it before they’re able to use it. No user account is required to use Firefox Hello, though it does support signing into your Firefox account (which you probably also use for Sync).

Version 35 also brings other new features aside from Hello. A shortcut to the Mozilla Marketplace (labeled Apps) has been added and is also initially hidden in the customization panel. A new button on the toolbar does appear by default after an update. Following the trend of mobile browser, Firefox v35 now also has a share button, but you will have to activate the services, like Pocket, Gmail, Facebook or Twitter, first before being able to use them. 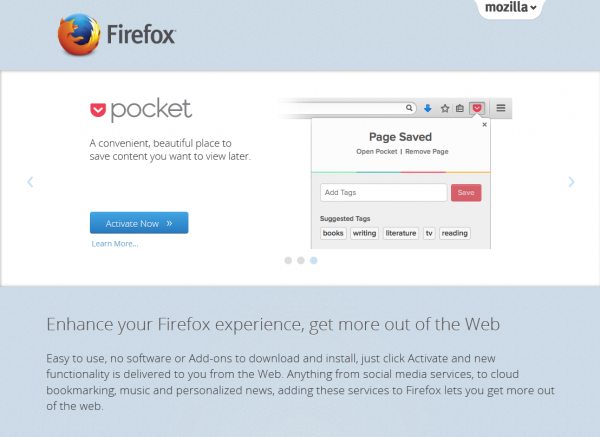