Firefox “Enhanced” Tiles are here, but there’s a way out

For some, the dreaded day has arrived. Mozilla‘s attempt at monetizing the browsing experience by subtly injecting some ads into Firefox‘s New Tab page has finally landed and, at least for now, it seems here to stay. But Mozilla has a few last words to say about it to placate its worried users. And fortunately, it isn’t forcing the new way down everyone’s throat and has the left the door open for users to come and go as they wish.

Tiles have been an optional feature in Firefox’s New Tab page for quite some time now but Enhanced Tiles adds the element of ads into the mix. These ads aren’t exactly the same type of in your face ads you’d see in websites these days but they are still the same in essence: sites/content that you didn’t ask for but which others (advertisers) paid for to bring to your attention. That said, these new type of tiles won’t all be paid for ads. Mozilla notes that those can also be used for the organization to voice out important advocacies that it feels users need to know about.

The tiles, of course, won’t be a static collection. As previously reported, the tiles will change over time, adjusting to the user’s “frecency” (frequency and recency) of visit. Whether or not that means the user’s own visited tiles will eventually completely drive out sponsored tiles needs to be seen. But in any case, users can still opt out of the Enhanced Tiles feature entirely. All they have to do is to click on the gear settings icon on the upper right hand of the New Tab page and select either Classic or Blank depending on taste. 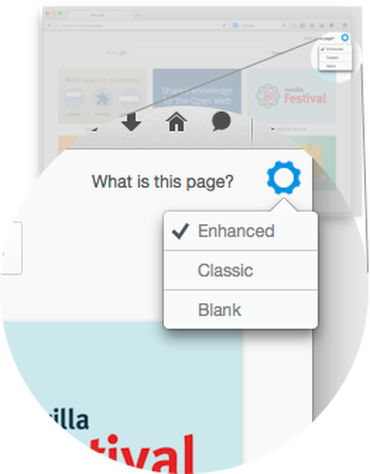 The advent of ads naturally brings up questions about privacy, since ads are, more often than not, individually targeted. Mozilla isn’t denying that there is some amount of data collection involved, but it’s saying that it isn’t harvesting much. At the very least, it only collects the country the user is from, not the specific location, the number of impressions the tile received, and the number of times the user pinned and unpinned the tile.

Just as with the initial reaction to the feature, the official launch of Enhanced Tiles is sure to ruffle some feathers. Whether or not the backlash will be enough to displace Mozilla’s standing in the web browser market remains to be seen. For now, things seem to be calm, with users either simply ignoring the arrival of the feature or immediately turning it off. What remains to be seen is whether it will bring in the revenue that Mozilla is hoping for, enough to risk the ire of its community.