Andriasang says that the Final Fantasy Ultimate Box will cost ¥35,000 in Japan, which works out to right around $447. That’s assuming that it even makes it to the United States, as at the moment, the Final Fantasy Ultimate Box is only confirmed for Japan. There’s no word on if it will launch in other regions yet, but it wouldn’t surprise us to hear that Squeenix wants to keep this Japan-only.

The first nine Final Fantasy titles will be offered on PS1 discs (with Final Fantasy VII through IX spanning four discs each) except for Final Fantasy III, which is included as a PSP game. Final Fantasy X, XI (Vana’diel Collection 2 to be specific) and XII are on PS2, and finally, we’ve got Final Fantasy XIII on PS3. It wouldn’t be much of an “Ultimate Box” if it only included games though, so Square Enix has added a number of extras, including an anniversary video, an art collection dubbed “Crystal ArtWorks,” a two-disc anniversary soundtrack, and a “mini replica of Amano FF 25th Anniversary visual.” 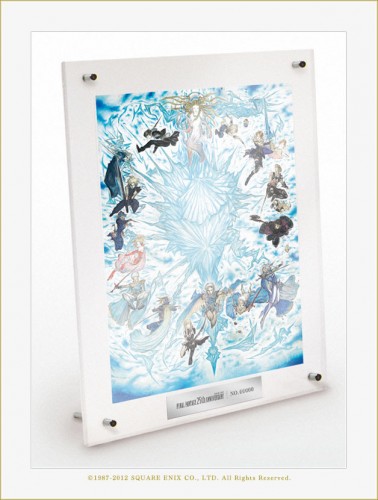 It definitely isn’t a bad collection, and it’ll be hitting Japan on December 18. It will only be available on the Square Enix e-Shop, which reinforces the idea that this is a very limited release. If that’s the case, then it isn’t looking good for a US or European release, but Square Enix might just surprise us – it is Final Fantasy‘s 25th Anniversary, after all. Keep it tuned to SlashGear, as we’ll have more information for you once there are new details to share.