Fiat has been teasing details around its next electric vehicle, the Fiat 500e, expected to arrive on Californian shores sometime in 2013. The new car – which will make its official debut at the Los Angeles Auto Show kicking off on November 30 – will feature some aesthetic differences from the regular gas-powered model, with the burnt orange of the promo car Fiat is using in its teaser being offset with matte white detailing around the mirrors and  lower front grille.

The electric car also has different sills, while inside there’s push-button drive selection and matching white and orange trim. Of course, the real differences are going to be under the hood, though Fiat is yet to confirm anything about the powerplant. 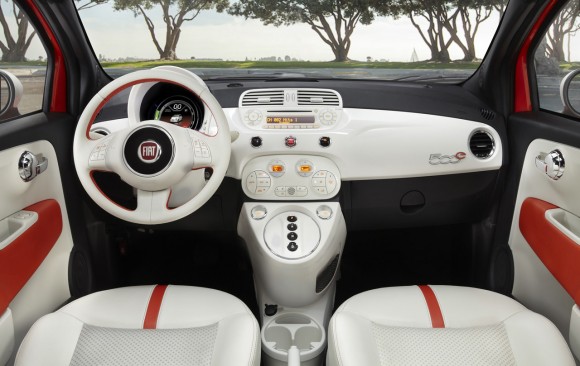 According to an announcement back in 2010, the 500e would use battery technology from shuttered firm A123Systems, which sold its assets to JCI back in October. Somewhat ominously, Fiat execs have previously suggested that they are only making the electric car because of California’s Zero Emissions Vehicle program, which demands EV options from manufacturers selling in scale in the state, and have admitted that they could well be taking a hit of roughly $10,000 on each car sold.

Fiat-owned Chrysler currently lacks an EV of its own, lagging behind rivals in the US market. The company’s efforts at frugal motoring have so far centered around refining gas engines, such as those found in the Dodge Dart.