Per the FDA’s latest update on the subject, “Methanol exposure can result in nausea, vomiting, headache, blurred vision, permanent blindness, seizures, coma, permanent damage to the nervous system or death.” The FDA warns that part of the issue is methanol exposure through the skin, but ingesting the product is just… the worst.

This March (2020), the FDA took drastic steps to get hand sanitizers on store shelves and in the hands of citizens of the USA again, after the first rush for COVID-19. In June (2020) the FDA started warning the public that certain hand sanitizers contained methanol, and should not be sold in stores or used by humans.

This is a new sort of situation

This situation is odd, as a product tested by the FDA in the past is still sold in stores today, marked with the FDA’s test results, but does not seem to constitute enough of an issue for stores to pull the product from store shelves – or, more likely: online store shelves.

We’re in a transition phase, right now, where inside the USA, the FDA now says that no hand sanitizers containing methanol can legally be sold in stores to consumers… but not all brands and/or store owners have gotten the message.

“We remain extremely concerned about the potential serious risks of alcohol-based hand sanitizers containing methanol,” said FDA Commissioner Stephen M. Hahn, M.D.. “Producing, importing and distributing toxic hand sanitizers poses a serious threat to the public and will not be tolerated. The FDA will take additional action as necessary and will continue to provide the latest information on this issue for the health and safety of consumers.”

How to know which hand sanitizers are bad

One company, Eskbiochem S.A. de C.V., has gone so far as to incorrectly claim that their products have been FDA approved, where in reality they’re manufactured in facilities with undeclared methanol and/or made with “improper manufacturing practices.” 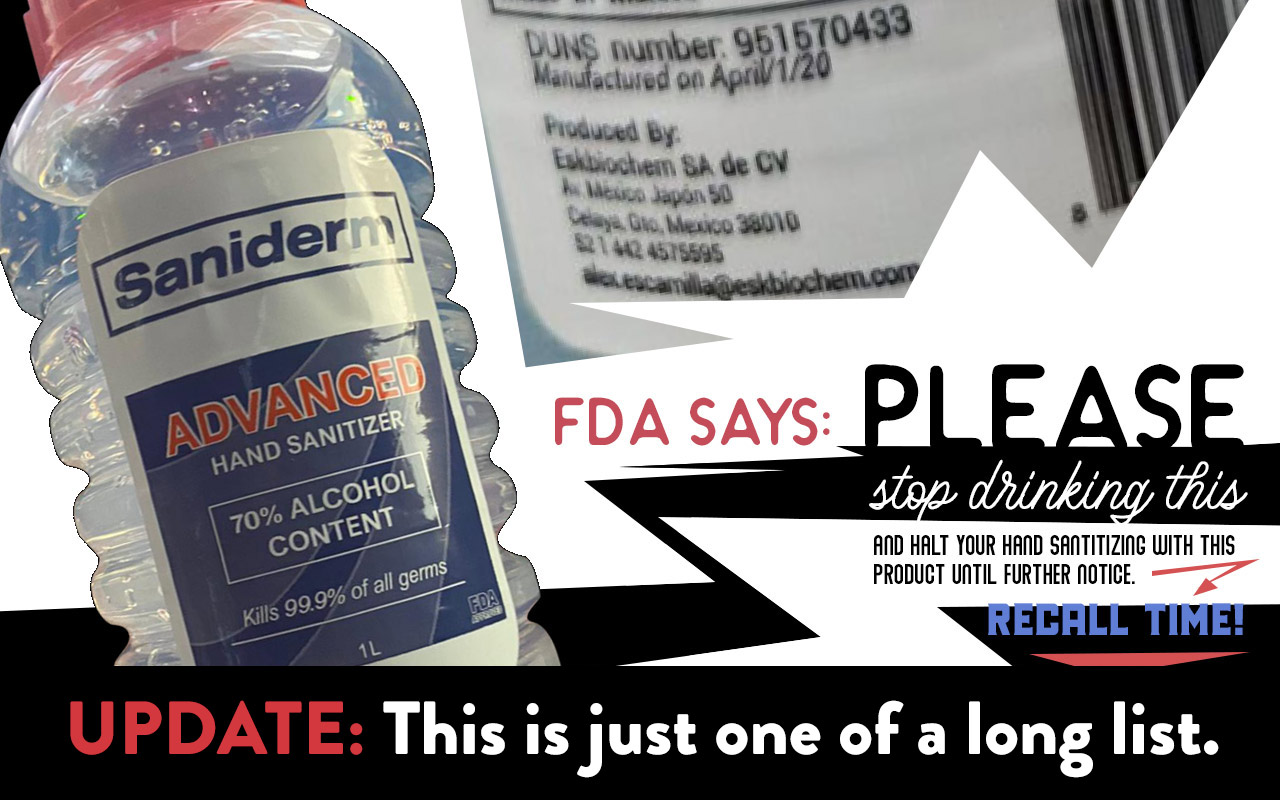 OF NOTE: The FDA noted that consumers that find products against which they’ve warned should AVOID pouring said hand sanitizers down their sink. Users should avoid mixing these sanitizers with other liquids, and should bring said sanitizer bottles to local waste management and recycling centers.