Google Glasses gave us a glimpse of what smart glasses could be but also dashed hopes they will generally be available any time soon. While the concept of always having a display in front of your eyes still needs time to mature, smart glasses seemed to be on the right track when it came to handling audio. Years after the Google Glass’ commercial demise, a new breed of “audio eyewear” devices have sprung up. Fauna Audio is one of the companies that jumped on that train, and we took its Spiro Transparent Brown Audio Glasses for a spin to see, or rather hear, what the fuss is all about.

Audio “smart” glasses are meant to be inconspicuous as tech gadgets, and the Fauna Audio Spiro Transparent Brown definitely fits the bill. You’d never guess the designer sunglasses would be hiding electronics inside it unless you actually start wondering about the bulky arms. Despite that size, the sunglasses were light and comfortable enough to wear for long periods, even for a kid. 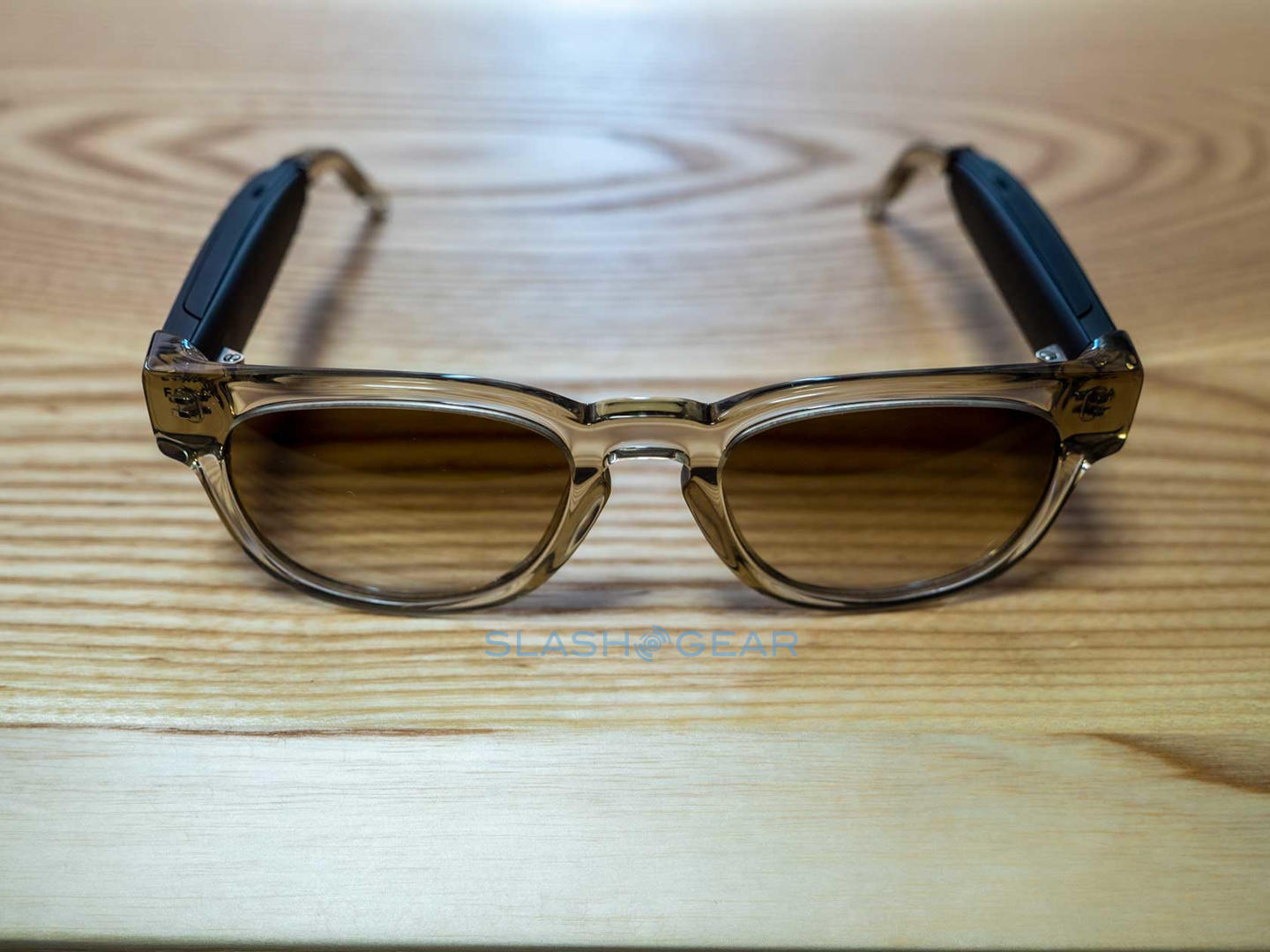 The lenses themselves are quite good, which shouldn’t be a surprise considering the Carl Zeiss Vision branding. The tint is graded and is almost completely transparent near the bottom, but you change those if you really need to. Fauna has instructions for how optometrists can apply some heat to change the lenses to a certain prescription or material.

The Fauna Spiro comes with a large case that matches the sunglasses’ designer style, except for the USB-C port and LED indicators on the front. Thankfully, there are no cables involved in charging the sunglasses themselves, so you just need to place them inside the case and ensure the charging contact points line up. 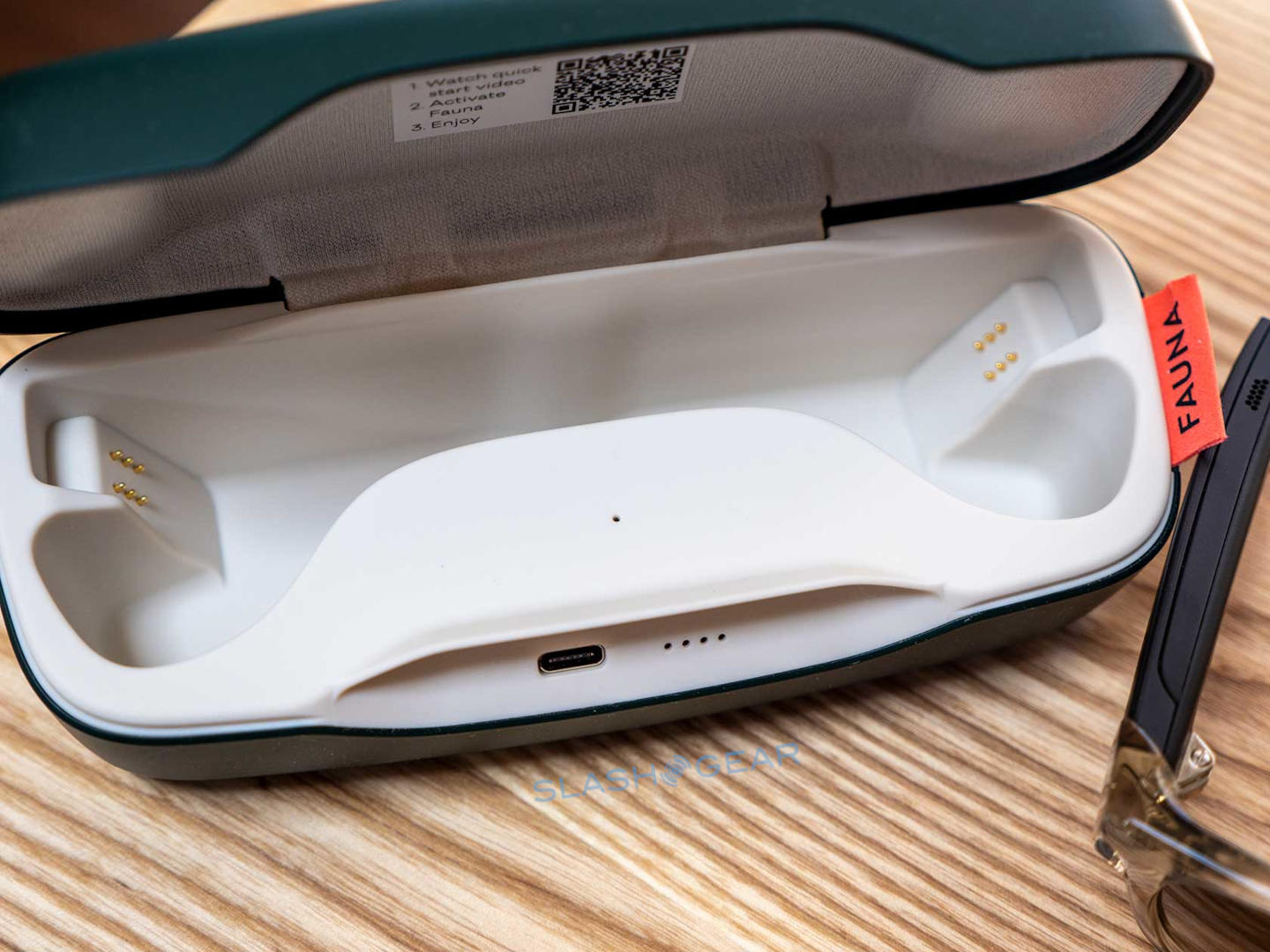 Of course, the Fauna Spiro Transparent Brown isn’t just a pair of designer sunglasses, it’s also an open audio Bluetooth headset. The latter part naturally comes with a few features that go beyond simply listening to music, but it all starts with pairing the sunglasses with an audio source. 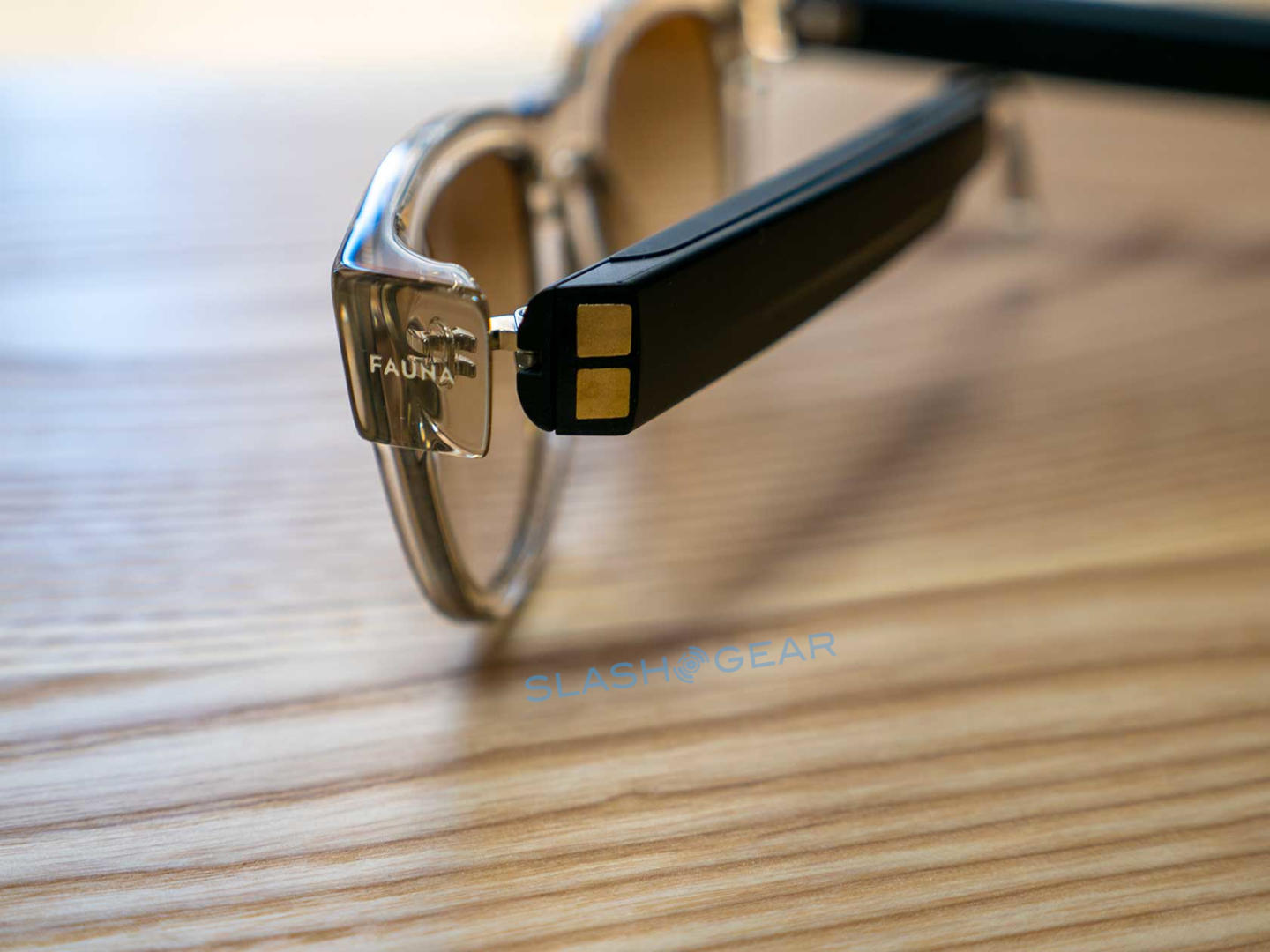 The initial pairing process can be a bit confusing if you didn’t watch the instructional video completely. When you first remove the glasses from the case, you’ll hear an audio notification that “Fauna is pairing.” It might not actually be pairing at that point, and you’ll have to tap and hold the right arm’s surface for four seconds to start the process.

The Spiro is completely controlled by fixed taps and gestures that you can’t customize to your liking. Double-tapping the right arm activates the default smart assistant on your phone. On the other hand, double-tapping the left arm controls playback and calls, and sliding across the surface controls the volume. 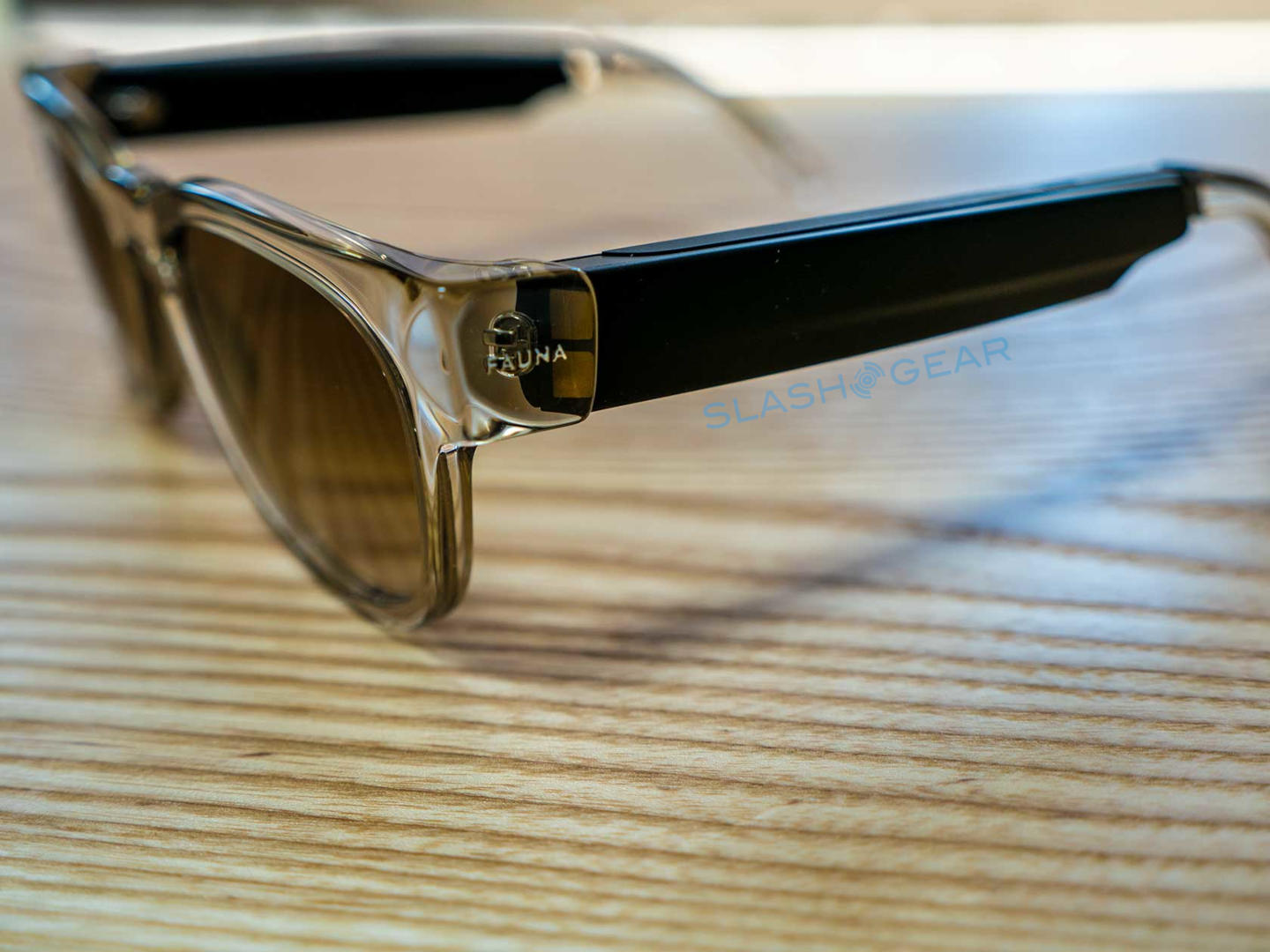 You probably won’t be buying the Fauna Spiro Transparent Brown for its looks alone, however, and audio performance plays the biggest role in its success. That audio is delivered through MEMS microspeakers sitting just beside the wearer’s temples and a woofer in each arm. There are also two microphones, both of which are located on the right side, something to consider when using the glasses for calls.

Audio glasses are designed with a specific context in mind, one where the wearer still needs to be immersed in ambient noise, whether for safety or practicality. That means that open audio speakers like these will never really be able to match headphones in terms of noise control or even volume, but the Fauna Spiro still does a decent job of it. Unfortunately, its maximum volume is lower than what we’d like, which can be a problem in noisy environments. 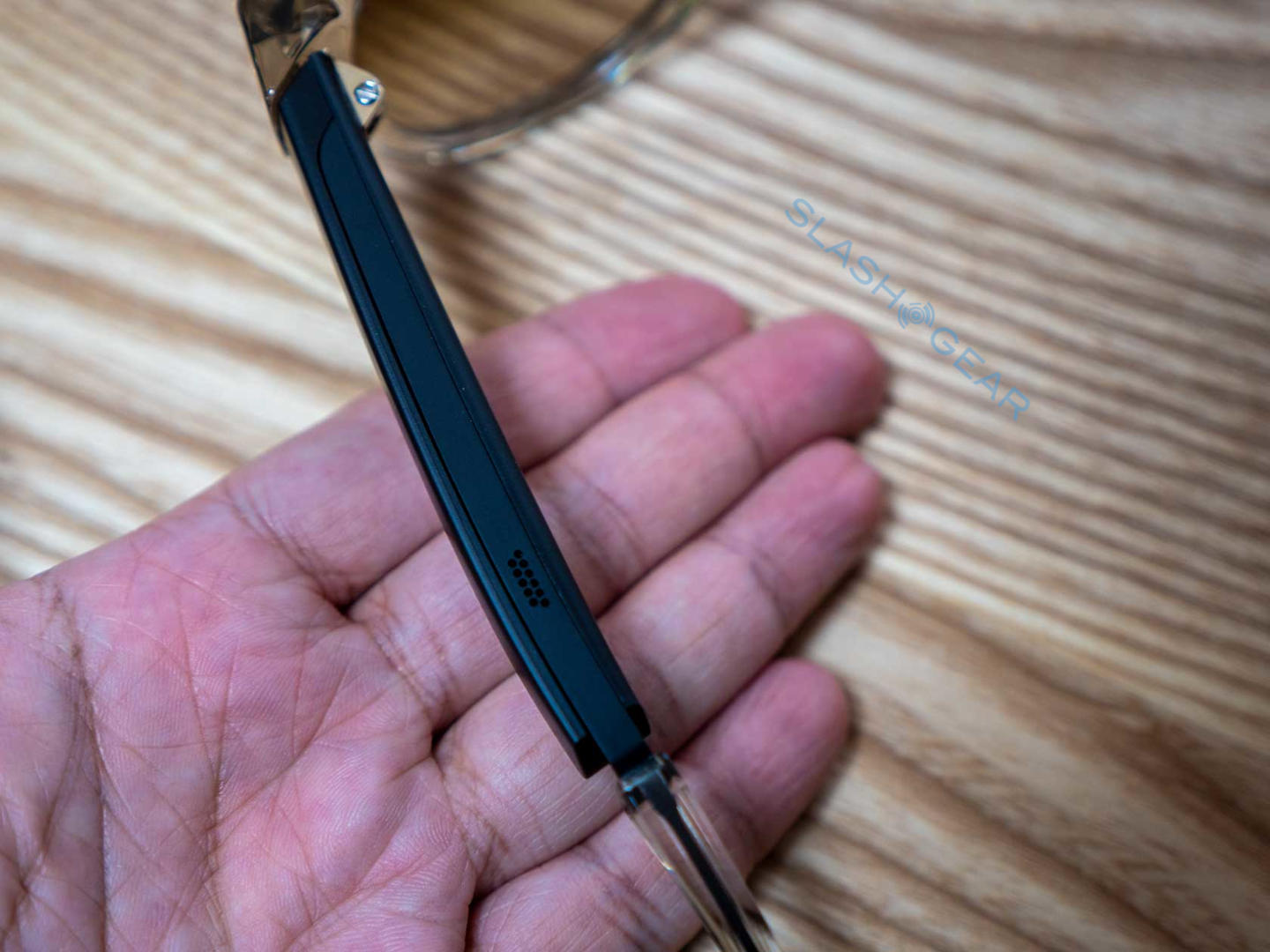 Audio output leans more on the highs and mids, with voices and vocals coming out clear and crisp. Unfortunately, it also lacks the depth to give emphasis to bass, making the overall output sound tinny, especially at max volume. This makes the audio glasses good for voice calls and podcasts but not so great for certain kinds of music.

Battery life is a rather low four hours, give or take, though the charging case tries to make up for it by juicing up the glasses at least four times more. Unfortunately, there is no way to manually put the audio glasses into standby mode, and you’ll have to put them back into the case to preserve battery life. Alternatively, it does fall asleep after 20 minutes of inactivity, but that means taking a large chunk out of an already small amount of battery life. 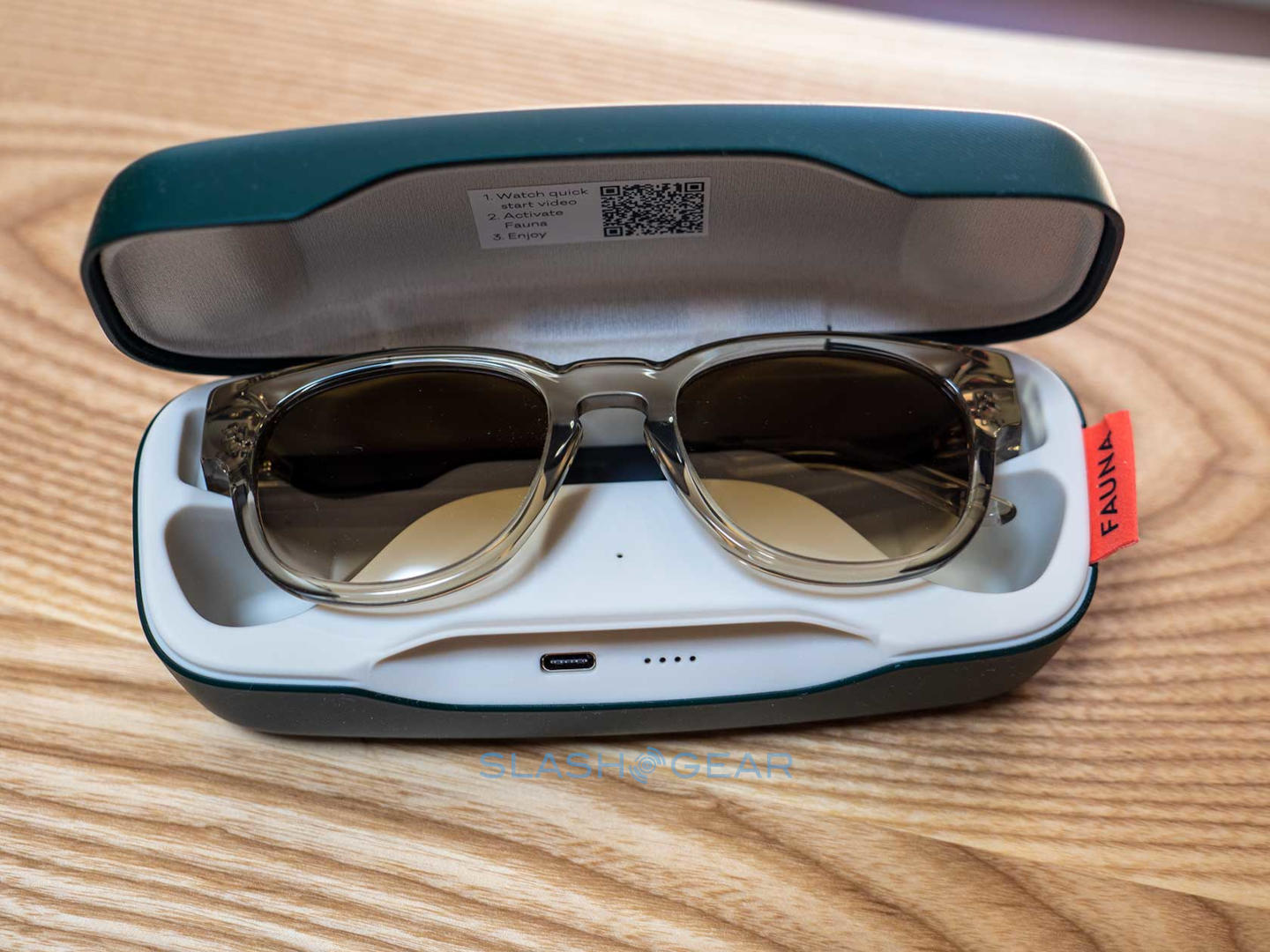 The Fauna Spiro Transparent Brown Audio Glasses is just the latest in a new breed of audio wearables that have taken inspiration from smart glasses but come with more practical uses in mind. It leans heavily on its designer looks, especially the Carl Zeiss Vision branding, and it’s an admittedly effective strategy.

Its audio performance, while decent, lacks a few things to make it great. At $299 (currently on sale for $200), the Fauna Spiro also leans more on the expensive side of its class, but the freedom to have the lenses replaced by your own optometrist makes it one of the more flexible choices in the market as well.