If there’s one thing we love about the current state of mobile devices, it’s the innovation that’s being ushered in by forward-thinking brands like event-specific handheld device group FanVision. With the FanVision Controller, these folks are bringing in in-depth information about the event they’re covering with a device that’s interactive, not just a tiny display, and connected to their data source via UHF. Believe it or not, the signals they’re working with are an older technology than the mobile data your smartphone uses, but here at each live event they work with, it works one whole heck of a lot smoother.

We had a chance to speak with FanVision’s VP of marketing mister Kevin Weinhoeft who was quick to tell us that the easiest way you can describe this device is to imagine you were at home watching the big race with a taste for all the data you could swallow in and around the track. You’d have to have your television, a computer, a radio, and maybe even your smartphone to get the same content you’re able to get sitting at the live event with a FanVision Controller. The first person he told this story to made the case: “you must have been in my living room last time I watched a race, that’s what I was doing exactly.”

This device has live statistics, live cameras, and replays of events on the track right after they occur. UHF connectivity makes the dedicated network at the track possible and isn’t interrupted by the massive amounts of data being blasted around with everyone else’s smartphone. Weinhoeft spoke on how the device was made also to be relatively rough and tumble, too, not fragile like a smartphone or a tablet.

“FanVision was designed to work in the elements. Whether it’s really cold weather or whether it’s really hot weather or whatever else. Now it’s not waterproof, by any stretch of the imagination, but – we’ve had a lot of races where there’s rain or moisture or whatever where of course we don’t have any issue with the device going down because it’s getting a little bit of rain on it.” – Weinhoeft 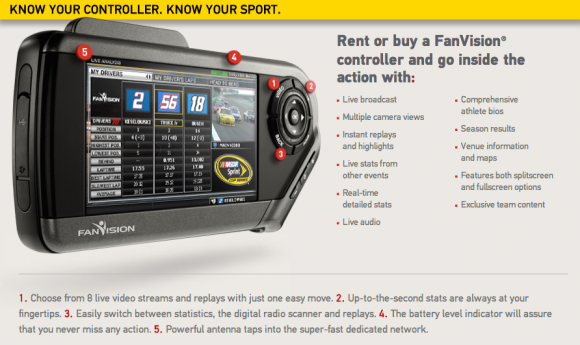 Everything you look at when you’re at a race on the FanVision device is curated by the dedicated FanVision staff at the race. FanVision works with the cameras that are on-site and the information that comes direct from the source, updating every statistic and element as it changes.

“We’re not doing any kind of production, we don’t have people with cameras that are in the pits or in the garages or anything like that. We’re taking content directly from, as an example, in Phoenix, we’re taking the SprintVision content that’s being fed to the track. So we’re not – in essence – taking ESPN’s content. And as a matter of fact, the radio broadcast for this weekend will be MRN. So if we’re at an IFC track, it’s MRN radio, and if we’re at an SMI track, then it would be PRN radio.”

Then there’s the video – from the on-track cameras to the in-car cameras, you’ll be getting more up-close-and-personal than you’ve ever been before, right on the FanVision Controller device. Weinhoeft makes it clear that the content they’ve got here is everything you’ve ever had on your television at home, the smart device in your pocket, and more – and right as it happens.

Another thing that would change is on the Twitter Feed. We have specific Twitter feeds on the device, but as we move from track to track: this weekend it would be the @PhoenixRaceway handle. as opposed to a track from earlier in the season.” 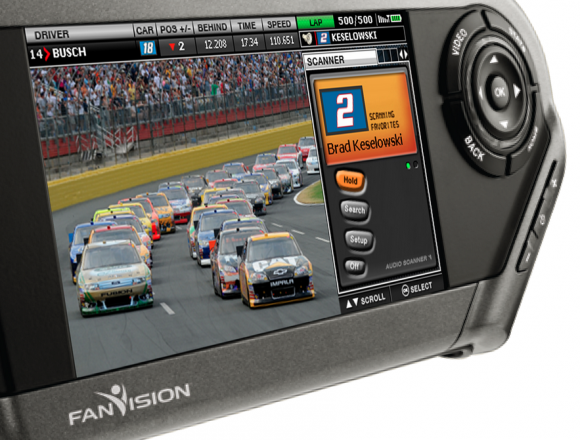 Then there’s the digital scanner – made to let you in on the radio feeds that are blasting back and forth across the track between crew chiefs and racers. Right out in the open, there for you to catch. If you’d love to get in just about as close as you possibly can without literally being in the pits (like SlashGear’s own Vincent Nguyen will be this weekend, mind you, at the Advocare 500 Sprint Cup Series race), you’ll need to listen in to the words being spoken by the crews using your own lovely radio scanner – built right in to the FanVision Controller.

“One of the biggest features on the device is the scanner. Because it’s digital, there’s no frequencies the fans have to program in. So they just select their drivers and they go. 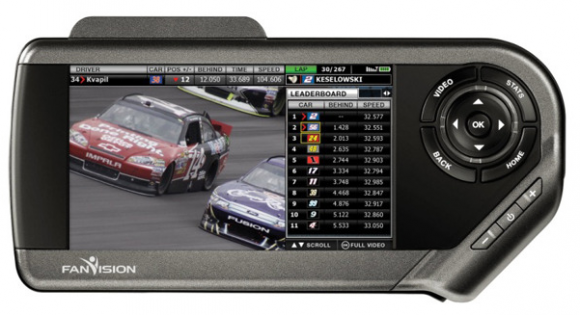 We’ll be having a look at this device when we’re live at the Advocare 500 NASCAR Sprint Cup race this Sunday as well as the following schedule of in-person events:

Be sure you check out the SlashGear main news feed and our Twitter as well @SlashGear to stay up-to-date on all things technologically awesome in the automotive universe! Have a peek at our brand new NASCAR tag as well to keep crusing on this particular track! 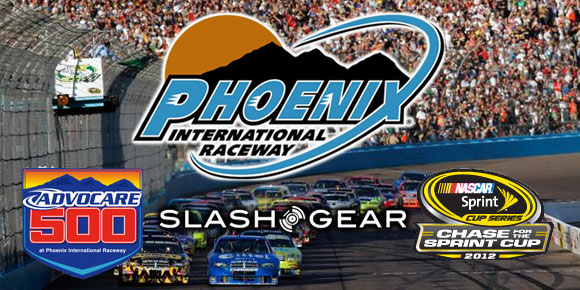