Researchers at Harvard and MIT have developed a new facemask that features a wearable biosensor able to detect the SARS-CoV-2 virus and other pathogens or toxins accurately. Researchers on the project devised a method of embedding synthetic biology reactions in fabrics to create wearable biosensors that are customizable to detect pathogens and toxins to alert the wearer.

The team integrated the technology into a standard facemask with the ability to detect the presence of SARS-CoV-2 virus in exhaled air from the patient’s lungs. The mask is activated by a button and gives results within 90 minutes at accuracy levels comparable to standard nucleic acid-based diagnostic tests like polymerase chain reactions. Researchers say they have essentially stuck an entire diagnostic laboratory into a small, synthetic biology-based sensor that works with any facemask.

The sensor combines the accuracy of polymerase chain reactions tests with the speed and low cost of antigen tests. The programmable biosensors can be integrated into other garments to detect dangerous substances, including other viruses, bacteria, toxins, and chemical agents. The sensors result from three years of work on what the research team calls wearable freeze-dried cell-free technology. 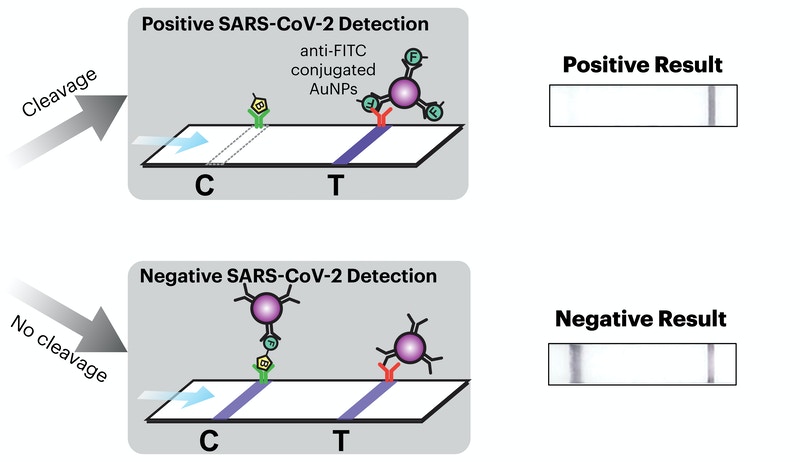 The technique extracts and freeze-dries the molecular machinery that cells use to read DNA and to produce RNA and proteins. The biological elements in the sensor are shelf-stable for long periods of time, and activating them only requires the addition of water. Synthetic genetic circuits can be added to create biosensors able to produce a detectable signal in response to a target molecule.

The test indicates negative or positive test results using lines, similar to a pregnancy test. A negative result has two lines, while a positive result has a single line. The team is clear that their technology can be integrated into other products able to indicate the detection of a target molecule with high levels of accuracy.