Facebook has opened up a new option to advertisers: fullscreen advertisements. The ads are part of its “Canvas” offering, which is limited to mobile and promises to better engage users than regular (read: smaller) ads. The user must click on an advertisement for it to go fullscreen — once they do, it could offer up more than one type of medium, for example embedding an advertisement video within a larger image. These advertisements will show up on users’ timelines.

These are so-called immersive advertisements, which immerse the user into the ad by blocking out all other content and providing more than one type of advertisement, such as a video within an image surrounded by descriptive text, for example. Fast food restaurant Wendy’s is one of Facebook’s early Canvas users.

According to the social network, users are better engaged with immersive ads than other options — more than half the users who clicked a Canvas ad view more than half of it, and they stick around for an average of more than half a minute, which is fairly substantial. This may have partly to do with the fact users must click the ad to go fullscreen; if someone clicks, they’re likely interested enough to stick around for a bit. 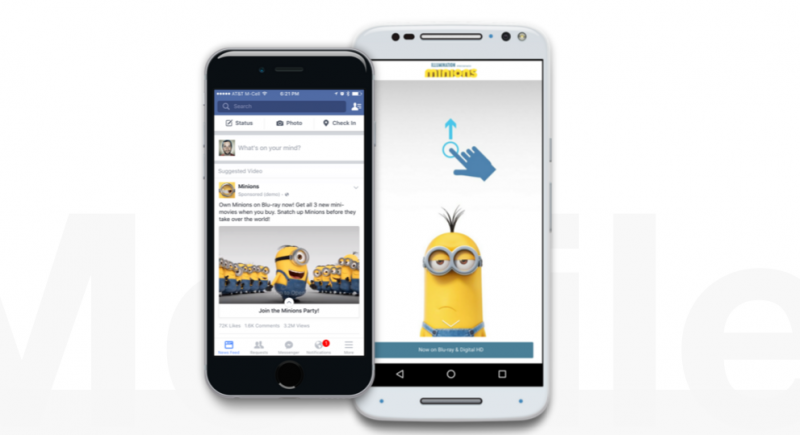 These Canvas advertisements are popping up for users on the iOS and Android mobile app, and the social network promises it won’t increase the advertisement load users are subjected to. This full-page system could also one day start showing up on other products Facebook owns, including Instagram.

The Canvas website calls these ads “a new space for big ideas,” showing off a demonstration of how the ads work. According to that site, Canvas loads up to 10 times faster than the ads would otherwise load on “the standard mobile web.” The website lists Kit Ace, Target, Carnival, Universal Orlando, BMW, Mr Porter, Macy’s, and Marvel’s Jessica Jones as already utilizing the platform.

Some users have had a knee-jerk reaction to the news, but the worry is largely unnecessary. While the fullscreen ads could be annoying if unwanted, you’ll only ever see them if you deliberately (or accidentally) tap the smaller regular ad — the image above shows how the Canvas ads look pre- and post-click. If a user purposely clicks on the ad, they’re likely interested, and so more informative ads would be welcomed in those cases.