Depending on how many friends you have on Facebook, your News Feed might be a fairly crowded place, filled with stuff you may not necessarily want to see. In an effort to let us manage what we see and what we don’t, Facebook is testing a new feature called “Snooze.” This allows you to temporarily mute your friends for a pre-determined amount of time, giving you a little more flexibility when it comes to hiding posts you don’t want to see.

As reported by TechCrunch, Snooze is meant to be a not-so-harsh solution when you need a reprieve from what your friends are posting. As it is now, we have the option to either deal with the posts or unfollow friends, which hides their posts from your News Feed entirely while keeping them on your friend list. This, of course, is a more attractive solution than cutting them loose and unfriending them entirely, but it also banishes them from your sight until you decide to follow them again.

The problem (for me at least) with unfollowing friends is that it’s really easy to forget who you’ve unfollowed. Snooze does something to solve that problem by letting you choose whether you want to hide posts from a particular person, page, or group for 24 hours, 7 days, or 30 days. 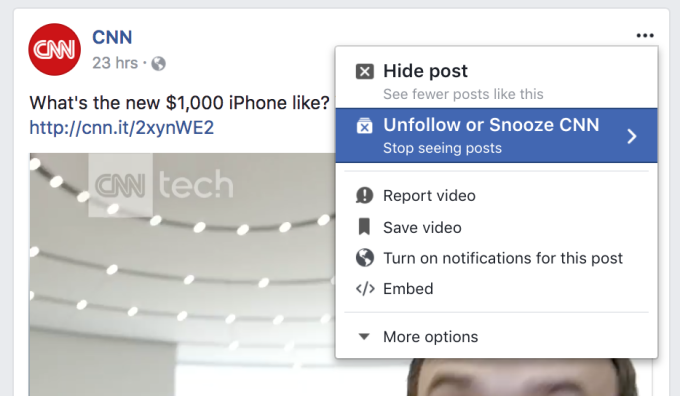 So, if you’ve got a friend who has an issue keeping their mouth shut when it comes to spoilers for your favorite show, you can Snooze them for a certain period of time so you don’t risk encountering those spoilers while you’re browsing Facebook. If, on the other hand, you’re following a page that’s going a little heavy on advertising for a new product, Snooze allows you to silence them without unfollowing – a benefit for both the company and the end-user.

TechCrunch has already spotted the Snooze button and taken it for a test spin, but it hasn’t appeared for me just yet. It seems, then, that this is a limited roll out that’s meant to put Snooze through its paces before launching to a wider group of Facebook users. We’ll update you once Facebook makes this feature official, but for now, head down to the comments section and let us know if you’re seeing Snooze pop up in your own News Feed!