This week Facebook reached a milestone, one that includes 1-billion people having used the social network in a single day. This isn’t an average number – as Mark Zuckerberg said in an announcement today – but it is rather important. Facebook has millions of users log in every day, and billions of people using the social network every month, but here for the first time in the website’s history 1-billion people used Facebook in a single day.

“When we talk about our financials, we use average numbers, but this is different,” said founder and CEO of Facebook, Mark Zuckerberg, this afternoon. “This was the first time we reached this milestone, and it’s just the beginning of connecting the whole world.” 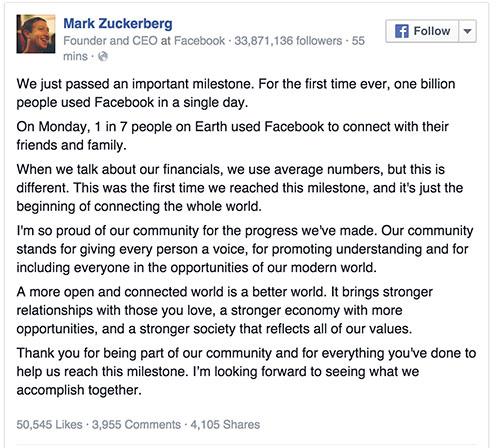 At this moment we’re at around 7.3-billion people alive at one time here on Earth. As Zuckerberg suggests, this means that approximately 1 out of every 7 people on Earth used Facebook this Monday. Have a peek at the video below to see what this means to the Facebook staff and global community.

Below you’ll see a set of recent large announcements from Facebook, each of them showing how the social network is expanding. Not just by changing their layout, but by sending internet satellites into space and creating virtual reality experiences for everyone.