It’s time again to take a peek at your Facebook Privacy Settings and see if you’re still on-board with sharing everything and anything with the public – or if you want to hide it all down deep inside your hidden account. Of course there’s no one real way to hide everything you’ve ever added to Facebook, but the changes made this week make it one whole heck of a lot easier to do some mass-sweeps for your dirty, dirty past.

Facebook has announced this week that they are, first and foremost, improving their privacy protections. This includes “Privacy Shortcuts” that you’ll be able to change-over across the board for masses of people. In short, this means that there’s a one-button-link for most of the different ways you can block someone or block everybody – if that’s what you want to do.

Facebook has broken this all down into three Privacy Shortcuts that make it simple to understand for all: “Who can see my stuff?” being the first. Next is “Who can contact me?” and “How do I stop someone from bothering me?” This set of links is designed to help alleviate some of the massive amounts of stress Facebook feels on the daily from users new and old looking to stopper up the leaky ship that is their Facebook account. 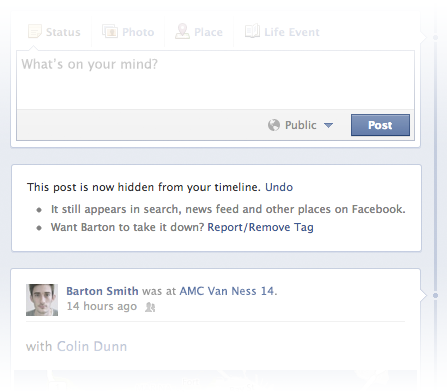 In addition to these quick-links there’s also a set of updates for apps inside of Facebook – starting with the permissions workflow. Where before there was one box, there’s now two, with Facebook splitting up permissions for reading and writing. It’s clearer now, or Facebook hopes it is, what you’re allowing each app to do. You can allow the app to read your public profile now without also allowing it to post on your behalf.

“Decoupling these requests gives people greater control when deciding what personal information they want to share with the app. For example, a person can grant an app the ability to read their public profile and friends list in order to sign up for the app, but decline to allow it to post to Facebook on their behalf.” – Facebook’s Alex Wyler

In-product Education has been ramped up with messages appearing now near every action you take: for example if you hide a post from your timeline, you now also get the option to undo, but also get a message about how the post may still be available for viewing in search, news feed, and other places on Facebook – clarity!

The Facebook Activity Log has been updated for you to see your own activity on Facebook from top to bottom . You can get to this list by entering the following in your URL bar: http://www.facebook.com/YOURUSERNAME/allactivity or by going to your profile and finding the “Activity Log” button to the right, under your header image.

The Request and Removal tool will likely be the most-used element added to this privacy masterpiece Facebook has whipped up. You’ll soon be able to go to the “Photos of you” tab, select a massive amount of photos, and hit a button that asks your friends to take the photos down. You can also mass-untag photos if you want out quicker. The only thing that doesn’t rock about that is the fact that, per Facebook, “while untagged photos don’t appear on your timeline, they can still appear in other places on Facebook, such as search, news feed, or your friends’ timelines.” 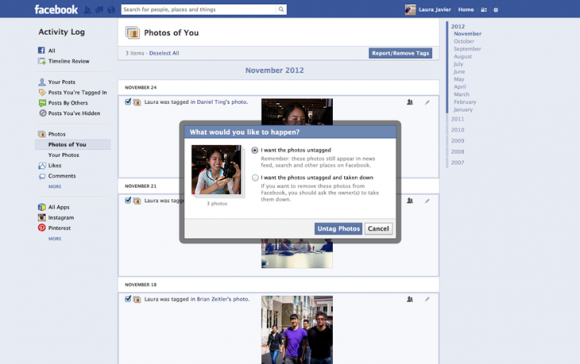 All of these changes will be unleashed gradually with the massive amount of them being revealed for the full Facebook universe starting near the end of 2012 – see them soon!