Facebook posts can now be exported to Google Docs, WordPress

Depending on how you look at it, Facebook may have surpassed Google in being the poster child for harvesting personal data on the Internet. Considering how much of people’s online lives and information it has in its possession, the social media giant regularly gets pushed, mostly through laws and regulations, to take certain steps to secure and unlock users’ information. Part of that is allowing users to move their data outside of Facebook and a new export tool will let them do just that to transfer their posts to other online services.

The ability to export Facebook data has actually been around for a few years now. It’s part of the Data Transfer Project, an agreement among some of the Big Tech companies to allow users to move some of their data across different and competing services. Last year, Facebook made it possible to transfer photos to Google Photos and now it’s doing something similar for posts themselves.

According to the blog post, Facebook users can go to their account’s “Your Facebook Information” Settings to select Transfer Your Information. You can select either Photos or Notes (but not both at the same time) and have them copied over to Google Docs or WordPress. You will then be asked to log into those external accounts before the transfer begins. 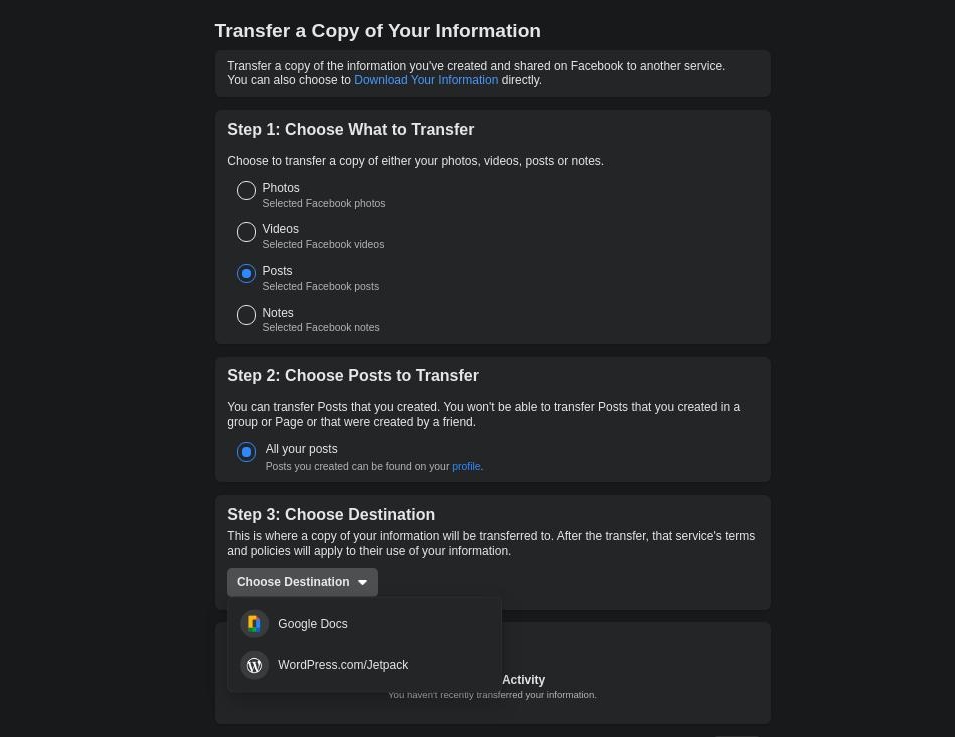 Facebook promises that the tool is secure and private and that data is encrypted as it moves between services. Comments to posts are not exported, however, since they’re associated with someone else’s Facebook account.

It’s a small but important step for Facebook users to have their data unshackled from the social network’s walls, at least when they need to. Facebook is, of course, simply complying with regional laws and probably doesn’t expect most users to utilize them, anyway.