Facebook has been rolling out a lot of updates for iOS recently, but it isn’t about to leave Android out in the cold. Facebook Messenger for Android is scheduled to be updated today, and it brings with it a few new features that users will undoubtedly find handy. As if that wasn’t enough, the regular Facebook app for Android is being updated too, so those who use Facebook apps regularly on their Android device are in for a slew of new features.

With this new update for Facebook Messenger, users can now swipe their finger to the left anywhere in the app to bring up a list of available contacts. This lets you see who is online quickly, and for even faster access to your close friends, you can now add contacts to the top of your favorites list. While these new features are definitely nice, perhaps the biggest added feature in this update is a tweaked UI, which makes it easier to see who said what while chatting. 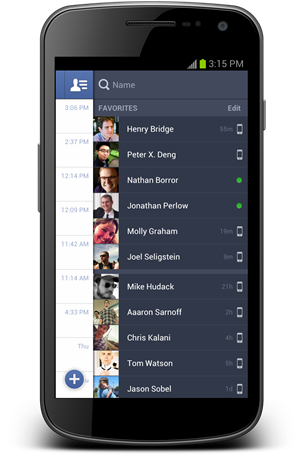 Finally, the Messenger update adds the ability to text your Facebook friends directly, and it keeps all of your texts and Facebook messages in one clean list. This feature is only available on select Android phones, but Facebook hasn’t actually clarified which handsets support it. We’ll likely be finding out which Android phones are supported when the update hits later today, so we’ll be keeping an eye out for those details. 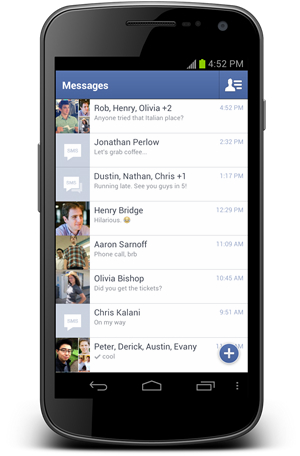 Now onto the Facebook app update. This update doesn’t bring too much in the way of extra features, but it give users a new button in the upper right hand corner of the news feed that can be used to see who’s available for chat. The new chat UI the Messenger app is receiving also appears to be present in this latest update, and now Facebook will tell you which of your friends are active, meaning that you’ll know if someone is using Facebook right when you send them a message. Of course, the update also includes a number of bug fixes that will improve stability, with Facebook saying that the update fixes “errors during multi-photo selections, device restarts, and push notifications.”

Both of these updates are expected to hit at some point today, but at the time of this writing, neither update appears to be live on the Google Play Store. They’ll be coming soon, however, so just sit tight. In the meantime, have a look at our story timeline below for more on Facebook Messenger and Facebook for Android!