Facebook Messenger dark mode is here: How to unlock it

After months of talking about it, it seems that dark mode is finally rolling out to Facebook Messenger users. Facebook is playing a little game with this release, as dark mode isn’t initially available as a toggle in settings. Instead, users need to unlock the feature through an emoji Easter egg before they can turn it on.

Thankfully, unlocking dark mode is a straightforward process. All you need to do is send the crescent moon emoji to someone on Messenger. This can be done in one-on-one conversations, group chats, or – if you don’t want to bother anyone with emoji spam – you can even send it to yourself.

Once you’ve sent the crescent moon, you should see a shower of moons on your screen, along with an alert at the top of the page telling you that you’ve unlocked dark mode. That alert includes a shortcut you can tap to head to your settings page, where the dark mode toggle will be front and center. Obviously, you’ll want to make sure that your Messenger app is updated before you try this, lest you end up sending crescent moons with no reward. 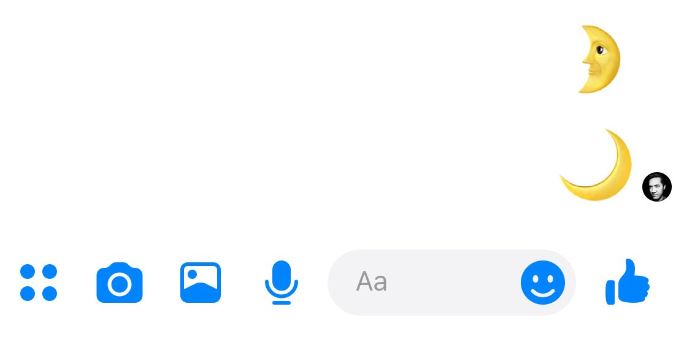 There are a few different moon emoji to pick from, including a crescent moon with a face that you’re likely to encounter first while scrolling through all of the available emoji. That isn’t the one you want – instead, you’ll want to find the second crescent moon emoji you see in the image above, which is the only one that will unlock dark mode.

At the moment at least, Messenger’s dark mode only seems to be available in the mobile app on iOS and Android, as the settings page on desktop makes no mention of it. It’s also worth pointing out that it may not be rolling out to everyone at the same time, so if you send a crescent moon and don’t unlock it right away, you might need to keep trying for a day or two.

Facebook Messenger’s dark mode was first leaked back in October and entered small-scale testing in January. Now that it’s finally arriving for the larger Messenger user base, it’s possible we’ll see it spread to other Facebook apps as well. We’ll keep an ear to the ground for more on that, but in the meantime, head down to the comments section and let us know if you’ve managed to unlock Messenger’s dark mode.