Facebook is making it easier to handle your post-death digital footprint, introducing a new Legacy Contact feature which allows a pre-determined contact to turn a profile into a memorial. Legacy Contact builds on an existing option that converts the profiles of deceased Facebook users into stable shrines to their memory, allowing a trusted person to be nominated and that individual to then have some basic editing rights after a death has been confirmed. Alternatively, however, there’s the option to have your Facebook account self-destruct when you yourself pass away.

Previously, once Facebook received proof that the user had died, it would “memorialize” their account, effectively freezing it in its current state.

With a Legacy Contact nominated, however, there’ll be more flexibility in what that page will look like. For instance, they’ll be able to write a post that’s pinned to the top, perhaps announcing details of a service or simply explaining that the user has passed away.

They’ll also be able to see and respond to new friend requests, and update the profile picture and cover photo. 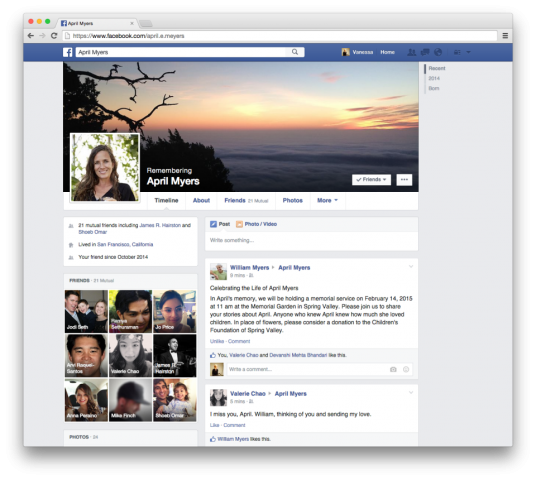 Optional will be permission to download an archive consisting of all the photos, posts, and profile information left online. Or, if you don’t trust anybody to tend your virtual grave, you can have everything auto-destruct.

Deciding what to do with online information once a user has died has been just one of the headaches Facebook – among other social networks – has faced over the past few years. Back in December, the company’s automatically-generated “year in review” video feature came in for criticism for including photos of dead friends, children, and pets, forcing Facebook to apologize.

Nominating Legacy Contacts will be done through the settings page, and US Facebook users will get the option first, though the social site plans to expand it to other countries in time.