Facebook has announced that users in the United States, including those on Instagram, can now opt out of seeing certain types of advertisements on the social media platforms, including ones related to politics. Users may still see some of these types of ads even if they opt out, but Facebook is giving users the ability to tag advertisements that made it past the filters.

Last month, Facebook announced that it would enable its US users to opt out of seeing certain ads including ones related to political topics and social issues. Only a small group of people were given access to this option, however, as a test before the feature went live for everyone. The feature would first roll out broadly to users in the US, then to those in many other countries.

We've completed the US rollout on Facebook and Instagram of the option for people to stop seeing all ads with disclaimers, that are about social issues, elections or politics. You can get there from any of these ads, or from the ads preferences screen 1/2 https://t.co/e7dTFMptpw pic.twitter.com/vMRi47sO4E

The big day has arrived for all Facebook and Instagram users in the US, Facebook’s Director of Product Management Rob Leathern announced on Twitter today. Users can directly access these controls on the “Sensitive Topics” section of Facebook’s Preferences settings. Ads that can be opted out of are: 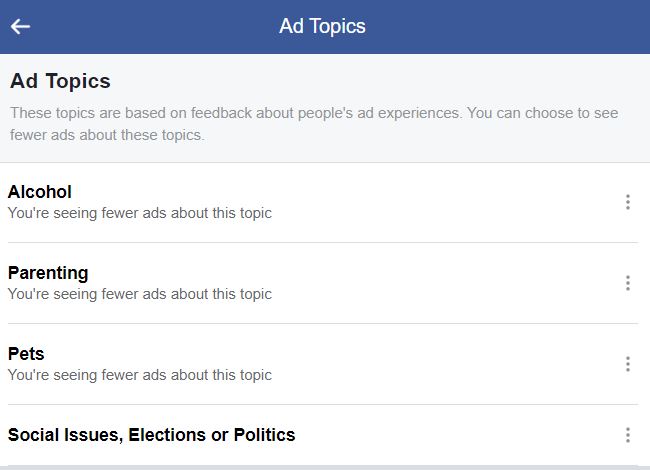 To opt out of seeing these ads, you’ll need to click on the new “Social issues, Elections or Politics” option in Ad Topics. Select “See fewer ads about this topic.” Alternatively, users can click on the small information on one of these advertisements to pull up the menu for it. At the bottom of the menu is this same option: to see fewer of the ads.

If you opt out of these ads but happen to see one on your account, you’ll be able to click the top corner of an ad that isn’t labeled to report it. Select the “Political Candidate or Issue” option to flag it for Facebook. With this new ability, Facebook ultimately still shows political ads on its platform — something that remains controversial — but can also point out that users who aren’t interested can stop seeing them.