Moving forward into the 21st century is going to take some significant changes in the way we build our cities, both here in the US, and worldwide. eVolo is an architecture and design journal focused on the sustainable designs that are going to drive this whole century. They’ve been running a skyscraper design competition since 2006. They recently released the results of this year’s competition. French architects took home the first and second place prizes. Atelier CMJN’s team Julien Combes and Gaël Brulé took home the first place prize for their LO2P. This huge circular structure features biogas producing greenhouses, massive air filtration, and will be built-from-recycled-cars. Yoann Mescam, Paul-Eric Schirr-Bonnans, and Xavier Schirr-Bonnans won the second place for their ingenious Flat Tower dome design. Yheu-Shen Chua from the United Kingdom took home the bronze for his re-imagined Hoover Dam.

The LO2P design is a combination of a recycling center, huge wind turbine, particulate filter and collector, and a giant biofuel-producing greenhouse. Wow. It was specifically designed to address the pollution that’s spiraling out of control in one of India’s fastest growing urban centers, Delhi. As the population booms, so does the number of automobiles on the roads. The idea that Atlier CMJN’s team put forward is to use the materials from recycled cars to construct the tower. 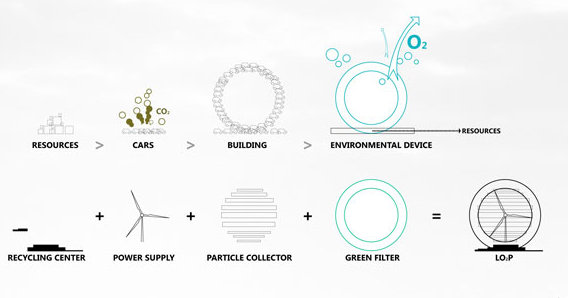 The Flat Tower is a dome planned to be built in a Rennes, France industrial center, but the team says that it can be easily adapted to fit in any medium-sized city in the world. The dome spans a planned urban park or other greenspace to keep as much vegetation on the ground as possible. Cell-like holes perforate the entire structure. These allow light and air to get to the interior space, and the relatively large surface area of the Flat Tower easily allow for rainwater cachement or solar energy collection systems to be installed.

Yheu-Shen Chua’s re-imagining of the Hoover dam is an interesting case. It’s a marriage between a hydroelectric dam and a skyscraper. The tower would actually be suspended from the dam and would hang down the 700 foot drop into the Black Canyon. Currently, the dam, gallery, and bridge are seperate structures around the area. Chua’s design would integrate them into a single structure, bringing every purpose: travel across the Colorado River, damming the river, and tourism, together into a single superstructure. The hanging tower would be the viewing gallery and would also contain a vertical aquarium, probably containing fish from the Colorado River itself.