“Up until this game we have always tried to make a game that we thought people would like” Terry Michaels, senior producer for EverQuest Next and EverQuest Next Landmark admits, grinning. “We were guessing.” That’s not an accusation you could level at Sony Online Entertainment’s next-generation titles in the EverQuest franchise, which takes the unprecedented step of inviting players in when Landmark is quite literally half-baked. SlashGear sat down with Michaels at the cusp of EQN Landmark alpha opening to talk crowdsourcing, the game as the new Craigslist, and how to manage ideas and expectations when your dev-team suddenly swells by 20,000.

SlashGear: “I think one of the most interesting aspects of the game is the idea of crowdsourcing. We’re used to companies coming to market with a relatively polished product: you go to a store and you buy a boxed, finished game, and you come home and put it in your Xbox or PlayStation or PC or whatever. This is not that model.”

Terry Michaels: “It’s absolutely not. I’ve been in the industry for almost fifteen years now, and up until this game we have always tried to make a game that we thought people would like. We were guessing. Some people didn’t think of it as guessing, but that’s really what it was. We were guessing at what people were going to want.

“This game, we’re opening up the doors before we’re there, and going “okay, let us know what you want, and then that’s the game we can make” so that, the result of this, should be something that’s far more agreed upon as a kind of game, a niche of game, or even a broad spectrum game that people like because they were involved in it while we were making it.

“It’s a very different way of working; we’ve seen a couple of indie companies do this, but to my knowledge this is the first time a company the size of SOE has tried anything remotely close to this. And so far the things we’ve been doing with SOE Live, we’ve got great response from our customers and the community, and the feedback we’ve been getting is that it’s great. We’ve been doing the roundtable and having lots of conversations about the game.

SG: “The idea is to give players the opportunity to shape the game as its being worked on, but to what extent is the possibility to change it actually there? You’ve talked about 65-percent of the game being complete…”

SG: “…so what’s too far a change given where development is up to now?”

TM: “What we’re doing is we’re approaching this very much like the people who are in alpha, the players and the community, they are part of the development team. We have a very open environment, and culture on the team: the ideas do not have to come from one or two people.

“I’ve worked on games where the Creative Director is the sole source of creativity in the game, and everyone else is just trying to deliver on that. That is not our team. It doesn’t matter if an idea for a game system comes from a designer, coder, an artist, somebody on the production staff, the PR team… it doesn’t matter, somebody else in the company.

“We want to include our community in the same way, so they can come in and they can make their case. They can say “hey, we really like this idea.” And we’ll be like “okay, well how does this fit in with these other things that we’re doing; can we meld it into something that is greater than the pieces?” And that’s the way we go about designing day-in, day-out on the team, and now we’re just opening it up to a larger audience.”

SG: “It sounds like there’s transparency in two ways: players can give you ideas and you can then say, “but that’s not practical…” So that, when it comes to launch and people complain “well why doesn’t it do this?” they will have heard beforehand, because you will have explained that roadmap to them.” 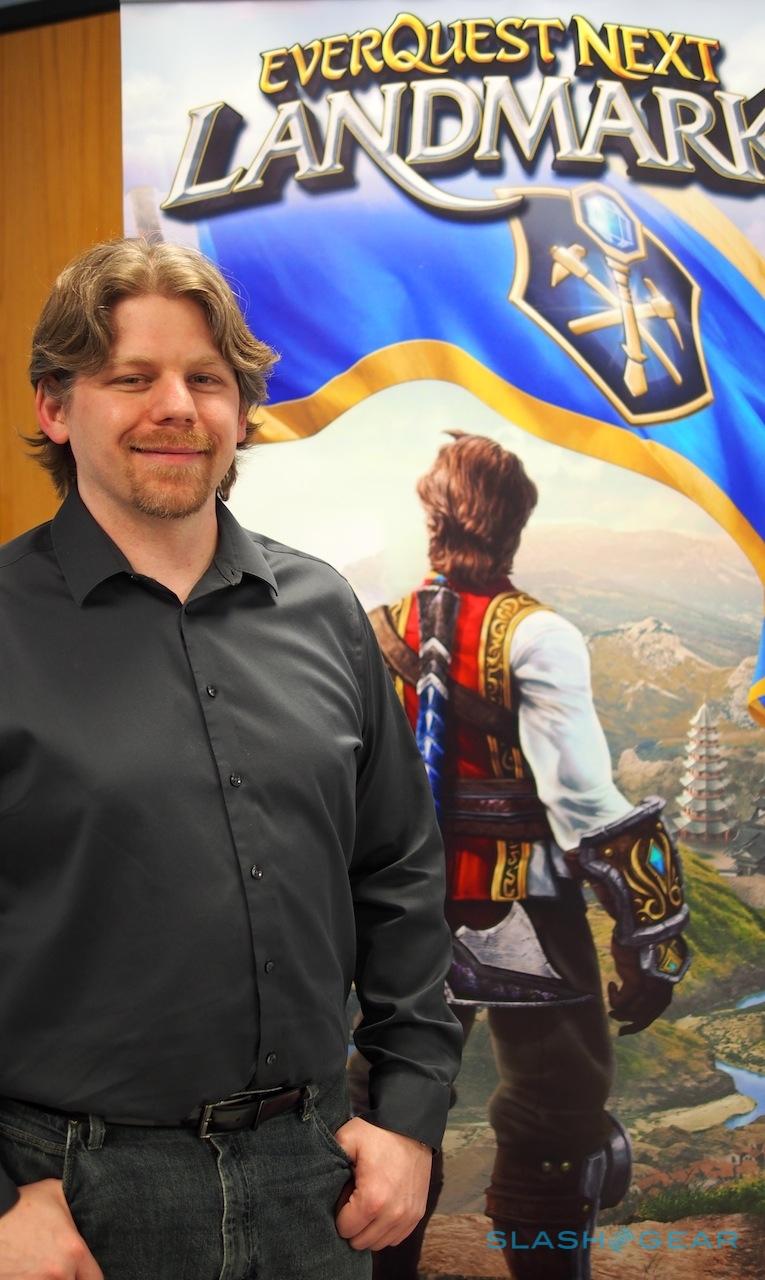 TM: “Exactly. That is our complete intent in this. Because they’re going to be just part of the team. So if we decide that we can’t, or that we don’t choose to do something that people put forward, we will explain – as much as we can; if there are 20,000 people talking there are only so many detailed responses that we can put out there, but the larger ones that get the backing of a large group of people perhaps – if we choose not to go down that path, or if we choose to go down that path, we’re going to explain the “whys” of it.

“Because that’s been the biggest thing, I think, in development, that players have great ideas: they may not fit, they may not be the best idea for a particular game, because they don’t always have all of the information. They don’t know how that impacts… y’know, how does death penalty impact the economy? How does it impact crafting? And how do all those things work together? Because they’re looking at it in a microcosm of this one particular aspect.

“And when you start to broaden it, and talk about it as we do, when you’re talking about the game and the design and everything, you start to see how everything cascades from one to the other, and to be a good game you have to find ways to get all those to work in harmony together. And that’s what makes a good game, no matter what kind of game it is: that harmony that actually creates something that’s sticky, and interesting, and appealing to a particular subset of the players.”

SG: “Our audience includes less dedicated gamers: very tech-involved, but perhaps they don’t have as much time to spend on games as some might, or choose to spend as much time. One of the things I noticed just sitting down and trying it out today is that it’s pretty involved. If you want to get anywhere, the tools are there to do the basics quickly, and then leave you the room to do the detailed work which takes a long time. Do you think it could be a bit intimidating?”

TM: “It can be. It’s one of those things that, anytime you create a game that has a lot of depth to it, and a lot of things – I don’t want to say complication – but a lot of connections in the different systems, it can feel overwhelming to a player in all the things they think they have to do. We’re going to balance that with the idea that, what we want, is we want you to always be making progress, in whatever increments of time you want to play.

“And then we want to create ways that people can work together, so that maybe in your thirty minutes you can do something that maybe I don’t enjoy doing in the game, or that isn’t my particular cup of tea. And we can work together, and you can get a benefit out of it because maybe I play more, so I can give you resources that you don’t feel like going and collecting, but you can do something that I want, that I’d rather not have to do in that same amount of time, and we can create this beneficial relationship where you have social interaction; you get benefit from other people in the game. Last thing we want is that you get sad that you see another player in an MMO.”

SG: “It sounds almost like there’s a social network element to it, and this talk about collaboration I think is really interesting, because perhaps you don’t have that so much in the existing big titles. You’ve obviously got the Player Studio where people can sell items; do you think there’s a need for a Town Hall, perhaps, where people can come and discuss these things. Where players like me who aren’t so good at doing one thing, but maybe might be happy to do the hard slog somewhere else, would be able to come together?”

TM: “Absolutely, and we’ve talked about it a few times with the idea that we want to have it so that your particular skill-sets, you can make available, and also find out about opportunities where somebody needs your skill-set. So the whole idea of looking for work, or looking to hire…”

TM: “Yes’ we’ve actually talked about that particular thing. Especially as we expand the tools that are available to you in the game; in the beginning it’s all about construction as far as the creativity goes, but we’re going to expand that to the ability to make content. To be able to populate an area with townspeople, with monsters, whatever it might be. Create a story, create a reason for being there. So that you can work your way through a storyline that a player or a group of players have created.

“And as we introduce those other tools, people will gravitate toward the things that they enjoy and the things that they’re good at. So, maybe I’m not a good builder, but I’m amazing at writing dialog, and somebody else has a friend who is really good at manipulating the AI. We’re going to come together and make something that none of us could make on our own nearly at the level of polish that we were able to do that by putting that information out: “look, I’m looking for a dialog writer,” or “I’m looking for a quest creator,” or “I’m looking for someone who can decorate my house, or my castle, because I want to put a story in here and I need this to look like a mediaeval castle.”

“So you’re really good at all the fine detail work, and I’ll pay you in game currency, or you’ll get credit to it, whatever the case may be. You’ll come and help me and, when we’re done, we have a relationship now and then next time I need it maybe I’ll contact you and you can come do that for me.

“So we definitely want to induce that sort of behavior in the players, because we know that as these tools grow and expand, everybody can’t do everything. They’re not going to be great at everything. Everybody has got their expertise, areas that they focus on getting better at. And we want that to create a community of people who can do things that will blow us out of the water compared to the things that we tried to do.”

Want the full run-down on EverQuest Next Landmark? Check out our behind-the-scenes look at the new MMO alpha