Evernote for Mac 2.1 Updates Include Note Sharing and Recording

Sometimes it is tough to organize all of the information we collect every day, and things can get lost. Where did I see that great article? Where was that recipe I saw that I wanted to make? Where is that paper that I used to write down the idea I had? Evernote, a personal and business organizational tool that lets you collect ideas, scan in handwritten notes, and save links, photos, and files, has a great solution to help. They have both a free and premium version of their app. Today, Evernote has released several updates today for their Mac app. The updates include sharing on Facebook, Twitter and elsewhere, recording audio notes, and faster search.

The new updates for version 2.1 for Mac include expanding sharing capabilities. When we wrote about Evernote’s update in December, they had just added the capability to share notebooks and access notebooks that others have shared with you. With this update, you will be able to share an individual note on Facebook, Twitter, email, and most anywhere else you’d like. 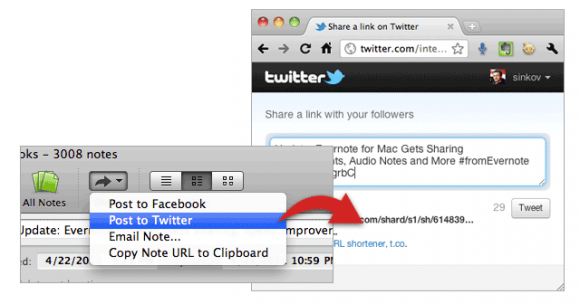 Also added is the capability to record notes, and also add text or attach a file while you are recording. That would come in handy if you need to record a meeting or a speech and add your own notes as well. Also, you can add an audio note within an existing note, if you think of something later that you want to add. Users of the free version of the app can record up to 25MB (about 2 hours), and Premium users can record up to 50MB (about 4 hours) per note.

Since we tend to collect so much information, it can get a bit overwhelming, so being able to search quickly is important. If search is too slow, frustration sets in, and things can get broken. So it’s a good thing that Evernote has been able to improve search speeds for sorting through all the crap we store.

Evernote has also let us know that they have fixed a whole lot of bugs in the app so it will run more smoothly. If you already have Evernote, and downloaded it through the Mac App Store, it will update automatically. You can also download it directly from Evernote.

Have you tried Evernote? What do you think?