Espresso finally arrives on the ISS

ESA astronaut Samantha Cristoferetti has made it to the International Space Station along with the rest of Expedition 42, but it may be the Italian’s luggage that prompts the most excitement on the orbiting research platform. Among the equipment being brought up to the ISS is a special espresso machine, the first designed to work in zero-gravity, dubbed ISSpresso: handiwork of coffee stalwarts Lavazza and aerospace engineering firm Argotec, it needed to work around some significant environmental issues, like the fact that hot espresso couldn’t be relied upon to drip down neatly into a cup.

Instead, lessons learned from pod coffee techniques were implemented. ISSpresso keeps both the water and the ground coffee itself in separate pouches, heating the former then pressurizing it before pushing it through the coffee capsule.

Rather than a dainty espresso cup, however, or even a paper cup with their name mispelled on the side, the astronauts will have to sip the brew through straw from a plastic pouch.

While your average pod coffee machine is generally pretty small, ISSpresso had a few extra criteria to fulfill which drove the size up. For instance, demands that all of the internal piping should be able to withstand in excess of 400 bar of pressure meant that steel rather than plastic had to be used. 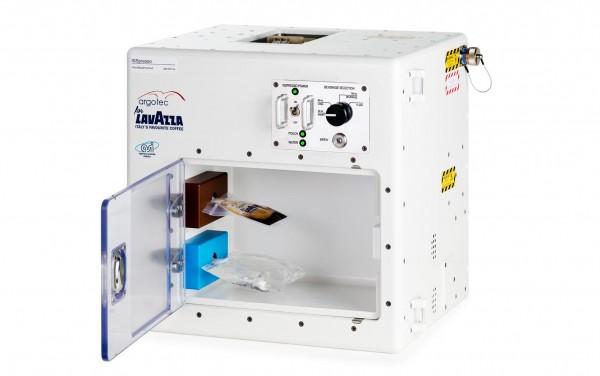 Every critical component has a backup installed. In fact, the machine ended up at around 44 pounds once the regulations and requirements were satisfied.

Although that might all sound like a lot of time, effort, and investment into a single-purpose device, in fact ISSpresso has a few more tricks up its sleeve. As well as making coffee, the same brewing system can be used to make tea, broth, and other infusions.

Argotec says that it has been working on the hardware since 2012, and that in fact it had a functional prototype midway through 2013.

Meanwhile there are scientific benefits too, the engineering firm argues, including insight into fluid dynamics and other implications of microgravity. Advances both in space on back on Earth will arrive as a result, Argotec insists, with patents already having been filed.

VIA The Guardian
SOURCE Lavazza