The nasal spray medication called Esketamine was approved by the FDA this year for treatment of drug-resistant depression – and we’ve done a bit of an investigation. Over 17.3-million adults in the United States suffer from depression – that’s over 7% of all US adults. It’s safe to say this affliction affects the way we live our lives – and it’d be a pretty excellent day when we figured out how to adequately treat it.

The 7% of Americans cited above represents the amount of adults that’ve suffered from what they’d classify as a “major depressive episode” in a recent study. This study was the most recent completed by the US National Survey on Drug Use and Health from the year 2017, published by NIMH in February, 2019. Below you’ll see a short presentation on esketamine by Mayo Clinic.

When the article you’re reading now was published, the NIMH webpage seemed to be out of commission, 404 style. You’ll be able to see the research that the NIMH release cited at Samhsa dot GOV. That page lists the following: “Results from the 2017 National Survey on Drug Use and Health: Detailed Tables.”

To take on treatment of the more drug-resistant sufferers of depression amongst us, Esketamine was approved by the FDA as a nasal spray this February, 2019. That’s also called treatment-resistant depression, and this nasal spray (in conjunction with an oral antidepressant) is looking to change the world with its first brand-name drug: Spravato.

The drug Spravato is the first major brand name for a drug that uses esketamine, a drug that’s been studied for medical use for over a decade. The FDA approved the drug with some relatively major disclaimers this year. 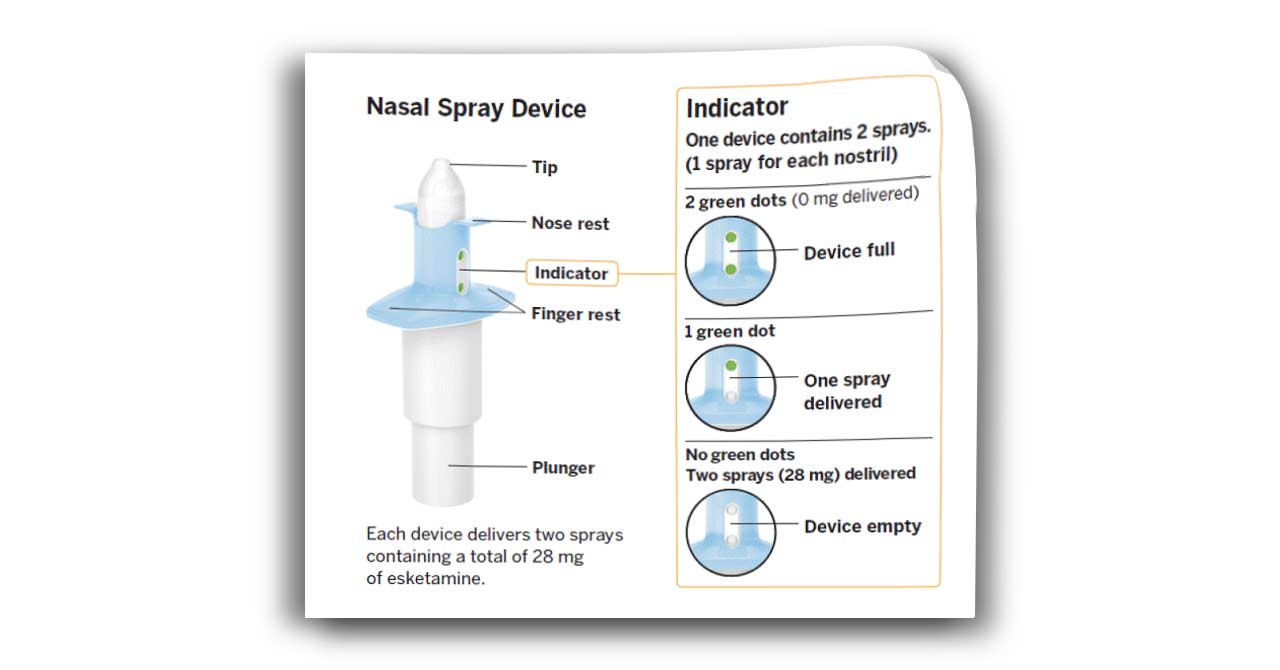 Thanks to clinical trials like this Janssen Research & Development, LLC study, (and the study cited below)* the “Efficacy, Safety, and Tolerability” seems to be understood well enough that everyday patients can partake. Patients, mind you – you’ll need to be prescribed this drug by a doctor. Take a peek at this quote from the FDA to see the serious nature of the warnings to which this drug is attached.

“Controlled clinical trials that studied the safety and efficacy of this drug, along with careful review through the FDA’s drug approval process including a robust discussion with our external advisory committees, were important to our decision to approve this treatment.” Tiffany Farchione, M.D., acting director of the Division of Psychiatry Products in the FDA’s Center for Drug Evaluation and Research. “Because of safety concerns, the drug will only be available through a restricted distribution system and it must be administered in a certified medical office where the health care provider can monitor the patient.”

*You might also want to have a peek at study published just this month on the efficacy of Esketamine. The title of that study is “Efficacy and Safety of Flexibly Dosed Esketamine Nasal Spray Combined With a Newly Initiated Oral Antidepressant in Treatment-Resistant Depression: A Randomized Double-Blind Active-Controlled Study” and you’ll find it with code DOI:10.1176/appi.ajp.2019.19020172 in the American Journal of Psychiatry as of May 21, 2019.

Esketamine is the s-enantiomer of ketamine. The February approval of this drug was the first FDA approval of esketamine for any use. Ketamine (Ketalar) was first approved by the FDA in 1970.

Trade names under which Esketamine is used thus far include: Ketanest, Ketanest S, and Spravato. The FDA’s granting of approval of Spravato went first to Janssen Pharmaceuticals, Inc. via FDA approval release. While this drug is approved to some degree, it is only available through a tightly-restricted distribution system.

The distribution system’s restriction is aimed at monitoring the real-world use of the drug. It’s part of a Risk Evaluation and Mitigation Strategy (REMS), so your doctor will have to do some fancy official request work in order to elect you a part of the group that’ll get this drug first.

The REMS requires that both the prescriber (your doctor) and you, the patient, sign a Patient Enrollment Form. The doctor and patient agree, via this form, that the patient will “make arrangements to safely leave the health care setting to get home and that the patient should not drive or use heavy machinery for the rest of the day on which they received the drug.” You’re probably going to be dizzy – or worse.

Oh, also, no big deal, but… estimated costs for the patient with this spray range from $590 to $885 per treatment session. And users probably need around one every four weeks.

Esketamine (Spravato) is currently a Schedule III drug in the United States, and an S8 (controlled) substance in Australia. As a reminder, because I cannot repeat this part enough, most commonly reported “adverse events” associated with FDA tests of this drug were: “dissociation, dizziness/vertigo, nausea/vomiting, sedation, paresthesia, hypoaesthesia, and blood pressure increase.” Below you’ll see and year additional information about Esketamine as a nasal spray via an official Mayo Clinic Radio presentation from April 4th, 2019.