The European Space Agency has published a new image showing a ‘slice’ of Mars, one that ranges from the planet’s white cloud-covered north pole down through a band of pocked orange landscape to dark blue southern terrain. The image results from observations made by the ESA’s Mars Express spacecraft, offering a unique, colorful, and highly detailed look at the barren planet.

The newly shared photo, which is a composite of many images, shows an incredible amount of detail — at least if you look at the high-resolution version available on the ESA website here. The centermost part of the image ‘slice’ features a resolution that is around 1 kilometer / 0.6 miles per pixel. The images were captured this past June using the Mars Express spacecraft’s High Resolution Stereo Camera. 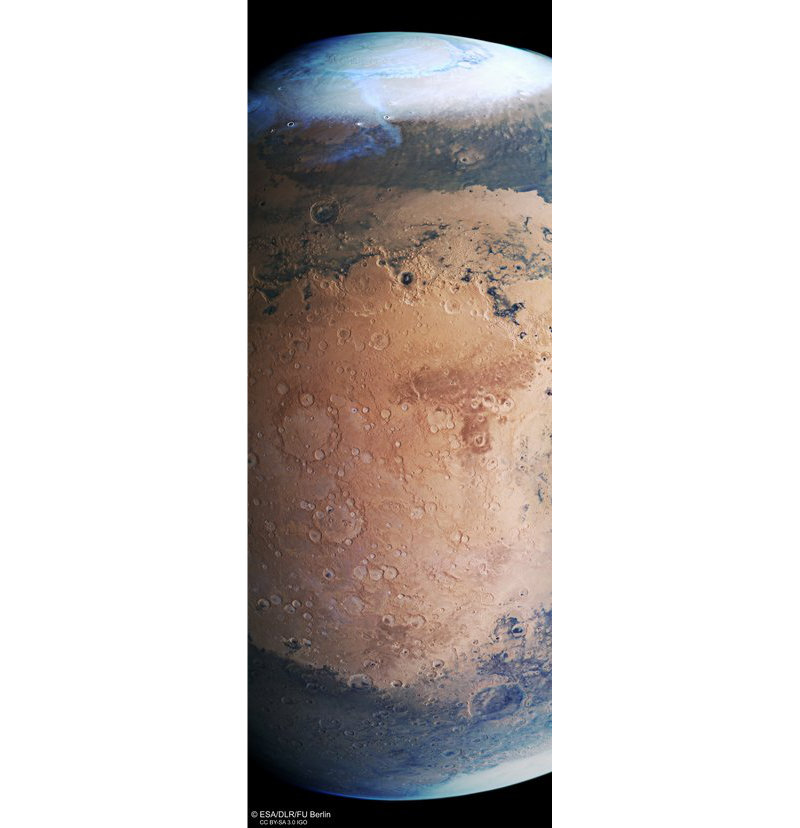 According to the ESA, the ‘slice’ shows the Martian North Pole as an ethereal cap of frozen water and carbon dioxide that is thick during the planet’s northern winter and thinner during its summer season. The bright white and light blue colors visible at the top are thick clouds; the thin blue tendril falling down from the cap is likewise a cloud.

Different characteristics and chemicals result in the mixture of colors and tones visible in the region, according to the ESA, which also notes that the planet’s southern hemisphere is quite different from the northern — notably, the southern region is believed to be ancient, whereas the northern region is young, at least in terms of a planet’s long life.

The central part of the planet dividing the two hemispheres is notably rugged, full of clips and peaks and impact craters, as well as the orange and red hues Mars is known for. The image shows the major parts of the Red Planet known as Terra Sabaea and Arabia Terra, as well as part of the region known as Hellas Planitia.