The ESA sent its Rosetta spacecraft to meet up with Comet 67p/Churyumov-Gerasimenko and send its Philae lander to the surface of the comet to perform direct scientific studies. Early results of those scientific studies have now been published in a special edition of the journal Science.

The data in the issue was obtained during the lander’s 7-hour descent to the first touchdown on the surface of the comet at the Agilkia landing site. The experiments were set to happen automatically after the lander touched down. 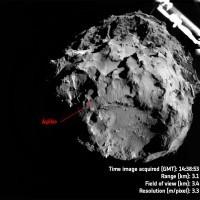 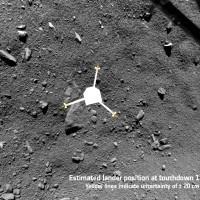 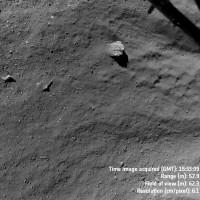 That means since the Philae lander rebounded and rose off the surface of the comet after landing, some of the experiments were carried out as the lander was in flight. 80% of the first science sequence was completed in the 64 hours before the lander went into hibernation.

The upside to the lander rebounding and leaving the surface of the comet after initial touchdown was that scientific observations were made at two locations on the comet. The first experiment carried out was via the as-sniffing Ptolemy and COSAV instruments that analyzed samples finding methyl isocyanate, acetone, propionaldehyde, and acetamide. None of those compounds had been previously detected in comets.