The European Space Agency is celebrating the 15-year anniversary of its Mars Express mission entering orbit, and here to join it is a new image from the Red Planet. ESA has given the public a look at the Korolev crater filled with ice, one it captured with the Mars Express High Resolution Stereo Camera. According to the space agency, the image is comprised of five strips combined into a single unified photo.

The Korolev crater measures nearly 52 miles across and can be found in Mars’ northern lowlands. ESO calls this a very well preserved crater, one that looks like it’s filled with snow but is actually full of ice. The ice measures a little more than 1-mile thick during Mars’ entire year, making it something like a year-long ice rink.

The constant ice presence is caused by a cold trap, a phenomenon where cold temperatures become trapped due to the crater’s floor depth lying so far beneath its rim. In the crater’s deepest parts, air moves over the ice, where it cools down and ends up trapped there. 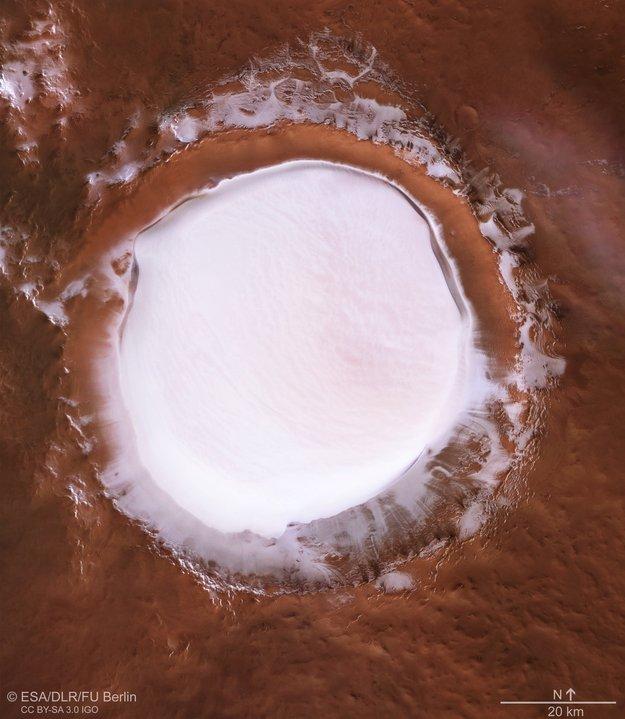 ESO researchers call this a ‘shield’ that helps protect the thick ice from warming up and evaporating. The Mars Express mission that captured the image was launched back in summer 2003, ultimately entering its orbit on Christmas six months later. That makes this month its 15-year orbit insertion anniversary.

Mars is the next great destination for human exploration and space agencies around the world have targeted it. NASA has three rovers deployed on the Red Planet, though Opportunity remains non-functional at this time. As well, NASA captures its own aerial images of the Mars landscape using its Mars Reconnaissance Orbiter spacecraft.