Engineers working on the James Web Space Telescope have announced they have successfully folded up and packed away a vital component of the telescope for its journey into space starting later this year. The sunshield is a five-layer, diamond-shaped structure approximately the size of a tennis court. The massive sunshield was designed to fold up around the two sides of the telescope and fit inside the smaller confines of the launch vehicle.

The James Webb Space Telescope will launch using an Ariane 5 rocket. With the folding complete, the sunshield will be packed away and remain in its folded state through launch, and for the first few days the observatory spends in space. The sunshield is designed specifically to protect the telescope’s sensitive optics from heat sources that could interfere with its vision capability.

NASA says that the sunshield is one of the most critical and complicated components of the Web Space Telescope because it’s an infrared telescope. The mirrors and sensors have to be kept at extremely cold temperatures to allow them to detect faint heat signals from distant objects around the universe. When the telescope is in space, one side of the sun shield will always reflect light and background heat from the sun, earth, and moon.

Thermal modeling has shown that the outermost layer’s maximum temperature is 383 kelvin or about 230 degrees Fahrenheit. The other side of the sunshield will always face deep space, with the coldest layer having a minimum temperature of 36 kelvin or about -394 degrees Fahrenheit. When fully deployed, the sunshield is about 70 feet by 47 feet, and when stowed away from launch, it fits inside the 18-foot diameter rocket fairing. 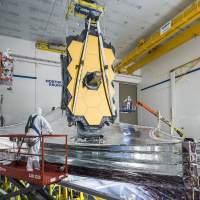 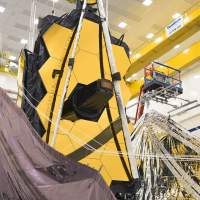 The folding process took about a month to complete and resulted in the sunshield’s five layers laying as flat as possible. After being laid flat, the layers were lifted vertically and propped onto a special support apparatus. Technicians folded each layer in a zigzag pattern creating an accordion-like stack of membranes on either side of the telescope.