Emotiv’s brain-reading Epoq gaming headset has been floating around for a while now, but it’s only recently that customers finally received their orders.  One such early adopter is Rick Dakan over at Joystiq, who slapped down $299 for an Epoq of his own.  Unfortunately, while the theory may be great, the implementation is sadly lacking.

From the start, the Epoq is difficult to wear, with sixteen individual head-pads that each need to be separately moistened and slotted into place.  Unfortunately Rick found that then trying to don the headset generally popped a few of those pads off; you also have to factor in the removal process, retrieving each pad and carefully stowing it in its box.

Once you’re actually wearing the Epoq, it doesn’t get much better.  Learning how to use it is frustrating, given there’s no indication of what you’re actually doing wrong when it fails to work (or, conversely, what exactly you did right when it responds), and even the three basic games – including Emotipong, shown below – were difficult to control.  You can map the commands from Emotiv’s software to general keyboard and mouse shortcuts, but if you can’t even master the up/down movement of Pong then more advanced system navigation seems unduly ambitious.  The conclusion?  “Seldom has the early adopter tax (one I’ve paid often) felt more onerous” says Rick. 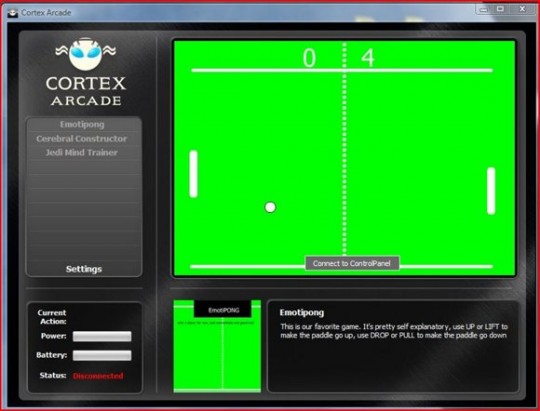