I’ll be the first to admit that I’m not a big Twitter user. In fact, I can’t recall the last time I logged into my personal account. However, sometimes I come across an account that is just too funny to pass up. I’ve come across one such account today, and felt the need to share it with everyone. I give you Emo Kylo Ren.

While I won’t give away any spoilers in this writing, bear in mind that should you dive into the Twitter account shown, you might see some things that you’d rather not. Of course it won’t be as funny if you haven’t seen the movie, so if you haven’t just save this one for later.

Emo Kylo Ren (@KyloR3n) is a self-described “Ren’s rights activist” who lives on Starkiller Base. From his tweets, it would seem that he spends his time pining over Darth Vader, and shopping at his favorite store, Hot Topic. 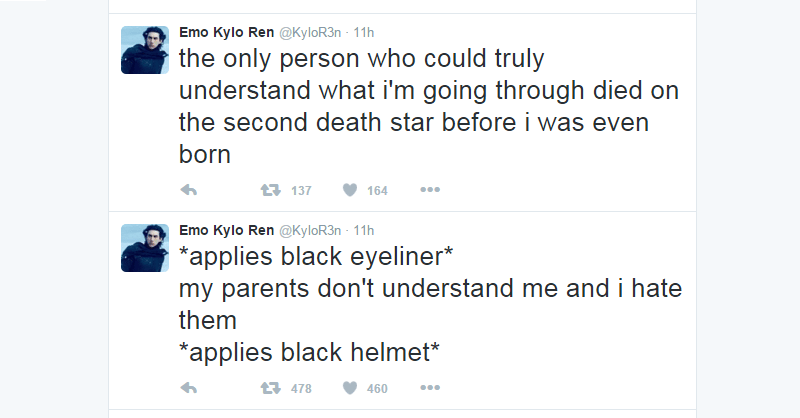 Despite being less than 24 hours old, the account has already gained more than 6,000 followers. He only follows two accounts, which are unsurprisingly Darth Vader, and Hot Topic.