Thunderbolt has plenty of speed, you can’t argue with that, but so far things to actually plug into the super-fast connection have been in short supply. Elgato has weighed into that rarefied company with the Thunderbolt SSD, a portable drive that delivers exactly what the name suggests. Capable of running from bus power, it’s a bag-friendly way of transferring multi-gigabyte files; check out more hands-on details after the cut.

Aesthetically Elgato hasn’t strayed far from the external enclosure norm: the Thunderbolt SSD is a black metal box, on the large side for a portable drive, with only one port at the end. 120GB and 240GB versions are available.

While Thunderbolt supports daisy-chaining of drives and other devices – up to six at once – the Elgato box’s single port means it needs to sit at the end of a chain. That’s a deliberate decision, the company tells us, as otherwise the Thunderbolt SSD would have to share the bus-power with whatever comes next in line. It does, though, mean you can only have one plugged in at any one time: you’ll need two available Thunderbolt ports if you have two Elgatos. 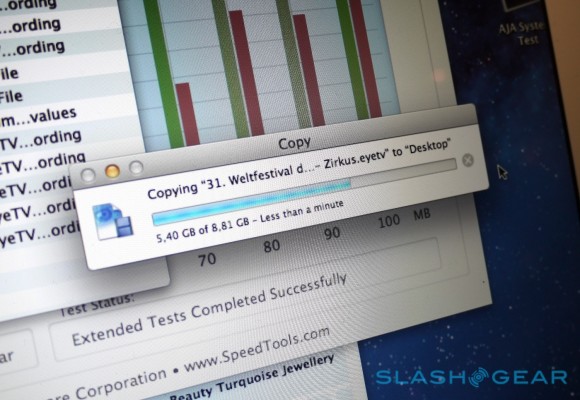 Still, speed is the Elgato’s purpose, and on that front it delivers. A 9GB file transferred from Thunderbolt SSD to an SSD-based MacBook Air in under a minute, while QuickBench 4.0 testing saw rates near 272Mb/sec read and write speeds lagging not far behind. Compared to USB 3.0 or eSATA – neither which is available on a MacBook Air or MacBook Pro, remember – that’s a considerable improvement.

Whether that improvement is worth the hefty premium you pay for Thunderbolt depends on what, exactly, you plan to do with all your speedy storage. The 120GB drive is €399.95 ($523) while the 240GB version is €649.95 ($852). That’s cheaper than LaCie’s SSD-based Little Big Disk – and portable, too – though neither is going to be an impulse purchase. Still, if you’re a mobile photographer or videographer, being able to edit source files directly from removable storage may well be worth it. 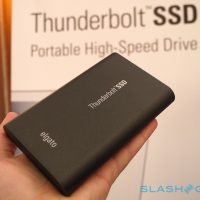 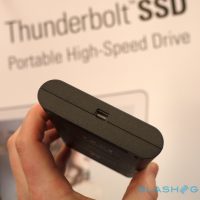 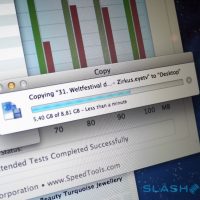 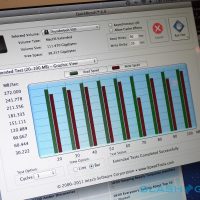