Electrify America has revealed plans to open 36 more high speed electric car chargers, tapping retailer Meijer to flesh out DC fast-charging options in the US Midwest. One location has already been installed, the company says, with a total of nine locations planned to be ready and operational by early 2021.

The chargers will be among the fastest options for electric car owners to top up their batteries in the US. They’ll range from 150 kilowatt (kW) to 350 kW, location-depending, though of course the EV itself will need to support such rapid rates in order to make the most of that.

Still, if you have the right car and the right charger, the pace of topping up the battery is considerable. Electrify America says that an EV capable of 350 kW fast-charging could add approximately 20 miles of range per minute connected. Access to the chargers will be available to any EV owner with an Electrify America account, including Tesla drivers who have the correct adapter.

The first location that’s already open is at Meijer’s Bloomingdale, Illinois store. Coming soon there’ll be three further locations in the state: Oswego, Aurora, and Evergreen Park. In neighboring Michigan, meanwhile, there’ll be five locations: Roseville, Allen Park, Bay City, Cadillac, and Gaylord. Full details on where, exactly, the participating Meijer locations will be are at the end of this article. 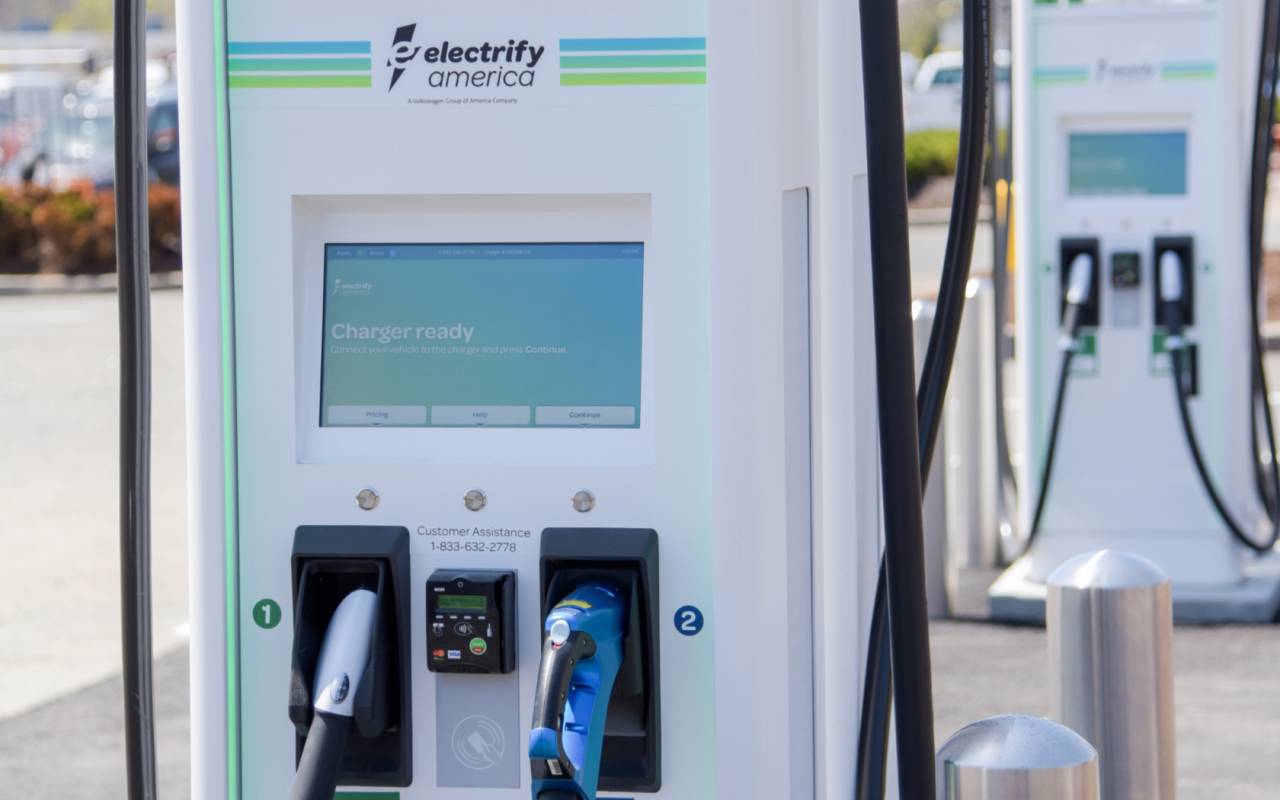 Overall, there’ll be 36 chargers spread across those nine locations. They’ll contribute to the roughly 3,500 DC fast chargers across around 800 locations that Electrify America says it should have operational by the end of next year. At that point, there’ll be chargers in 45 states, the company claims.

For the moment, there are 480 charging stations, and over 2,100 chargers between them. 100+ sites are currently in development, Electrify America says. The company is bankrolled by VW Group, which established the EV charging business as part of its penance during the “dieselgate” scandal, though it has since begun to look like one of the automaker’s best strategic decisions as it pushes its own electric vehicle development.

The upcoming 2021 VW ID.4 electric crossover, for example, will launch with bundled access to Electrify America chargers when it lands in the US later in the year. Since Electrify America is operated independently of VW, it’s been able to ink deals with other EV-makers to supply drivers of their cars with power while away from home or the office. That has proved to be a compelling workaround compared to Tesla’s strategy of building its own Supercharger network from scratch.

For those without bundled charging, Electrify America has either a pay-as-you-go pricing structure or a membership plan. The latter costs $4/month, but comes with cheaper charging rates. In Illinois and Michigan, for example, there’s no session fee and power is charged at $0.43 per kWh, with an idle fee of $0.40 per minute after 10 minutes of charging stopping. Those who are Electrify America members, meanwhile, pay $0.31/kWh instead.