Einstein ring holds gargantuan galaxy at the edge of the Universe

Japanese researchers have discovered a new galaxy so far away, it is in the outskirts of the charted Universe. To precisely map this galaxy the scientists turned to the Atacama Large Millimeter/submillimeter Array (ALMA) telescope and used the gravitational lensing of a foreground galaxy, which created a “natural telescope,” bending and magnifying light from the hidden, background galaxy, SDP.81. As the natural telescope magnifies SDP.81, the image loses focus and becomes smeared. The team of scientists was able to create a mathematical model to account for lens distortion and bring obscured details to light. In a way, the model is like correcting galactic astigmatism.

After correcting for gravitational lensing, they discovered that SDP.81 is a gargantuan galaxy that is birthing stars at rates possibly one thousands times as fast as our own Milky Way galaxy.

Einstein’s theory of relativity predicts that space and time can be bent by an object’s gravitational field; the stronger the field, the more space-time will bend. Light travels through space-time, so it follows the curved path. The images captured by ALMA are an effect of gravitational lensing called an Einstein ring. 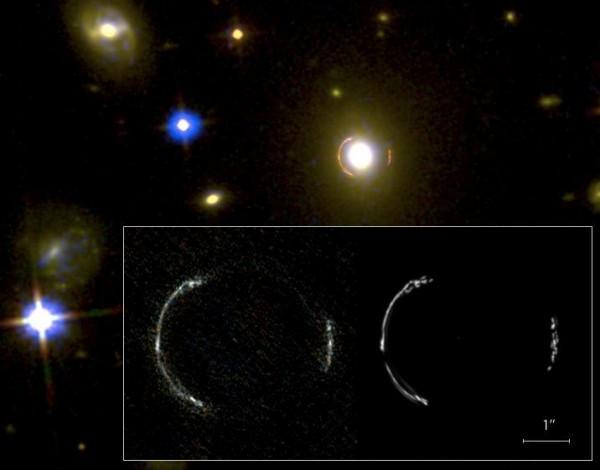 In the image above, ALMA captured the main image (background), and you can see SDP.81 as the orange arches curving around the bright spot. On the left side of the inset is a close up of the “smeared” image from Alma. To the right of the inset is the image predicted by the model, which is a cleaner Einstein Ring.

The Einstein Ring is created by the lensing of the massive foreground galaxy, but scientists found another surprise when applying their model–a supermassive black hole, as vast as 300 million suns, is at the center of the foreground galaxy.

The results of the researchers from the University of Tokyo and the National Astronomical Observatory of Japan, can be found in their published paper.