Despite much of the hysteria in the headlines these days, the American people have little chance of catching the Ebola virus. Our computers on the other hand, need to be careful. Email spammers are increasingly relying on Ebola scare-tactics in an effort to get recipients to open their messages and click on the links within.

Both the U.S. government’s Computer Readiness Team and Trustwave, a private security consulting firm, have issued warnings about an increase in spam campaigns with the Ebola virus as the subject, and messages containing either malicious links or attachments. Analysts say the last two weeks in particular have a seen a significant rise in the spam theme, following the confirmation of several Americans being infected. 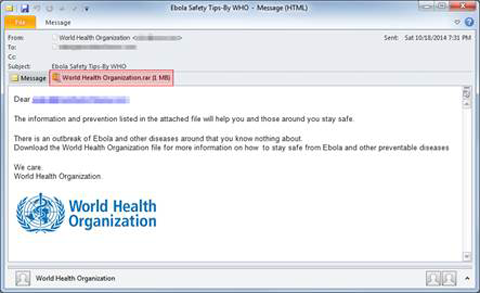 One example email claimed to be from WHO (World Health Organization) and included an attachment of safety tips to prevent the spread of the Ebola virus. Another posed itself as coming from the Mexican government. Allowing the contents to download from either message resulted in typical malware being installed on the user’s computer, including dangers such as recording keystrokes and recording footage from a webcam.

Trustwave mentions that a majority of the Ebola-themed spam messages are links to ads and pharmacy sites, and come under subject lines like “You won’t believe what Obamacare & Ebola have in common” or “First GMO foods, now Ebola. What Obama doesn’t want you to know.” However, those that attempt to look like they are coming from a government organization or WHO are especially dangerous and should be deleted promptly without opening.